Literature and Performing Arts in the Renaissance 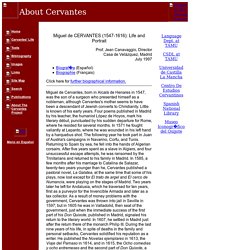 Jean Canavaggio, Director Casa de Velázquez, Madrid July 1997 Biografa (Español) Biographie (Français) Click here for further biographical information. Miguel de Cervantes, born in Alcalá de Henares in 1547, was the son of a surgeon who presented himself as a nobleman, although Cervantes's mother seems to have been a descendant of Jewish converts to Christianity. Little is known of his early years. What we know of Cervantes's life is the result of a long series of inquiries begun during the first three decades of the seventeenth century. The biography written by the author of this note (Jean Canavaggio, Cervantès, revised and amplified edition, Paris: Fayard, 1997) differs from its predecessors in its pretentions. (Translation by Melvin Hinton) Further biographical information on Cervantes. Return to top. Miguel de Cervantes Saavedra. Help support New Advent and get the full contents of this website as an instant download. 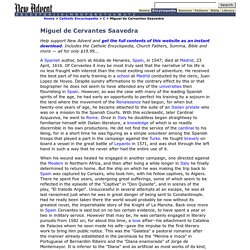 Includes the Catholic Encyclopedia, Church Fathers, Summa, Bible and more — all for only $19.99... A Spanish author, born at Alcála de Henares, Spain, in 1547; died at Madrid, 23 April, 1616. Of Cervantes it may be most truly said that the narrative of his life is no less fraught with interest than the most exciting novel of adventure. He received the best part of his early training in a school at Madrid conducted by the cleric, Juan Lopez de Hoyos. Despite sundry affirmations to the contrary effect by this or that biographer he does not seem to have attended any of the universities then flourishing in Spain. When his wound was healed he engaged in another campaign, one directed against the Moslem in Northern Africa, and then after living a while longer in Italy he finally determined to return home. 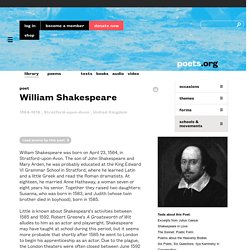 The son of John Shakespeare and Mary Arden, he was probably educated at the King Edward VI Grammar School in Stratford, where he learned Latin and a little Greek and read the Roman dramatists. At eighteen, he married Anne Hathaway, a woman seven or eight years his senior. Together they raised two daughters: Susanna, who was born in 1583, and Judith (whose twin brother died in boyhood), born in 1585.

Little is known about Shakespeare’s activities between 1585 and 1592. William Shakespeare. Biography of Cervantes. We know little about the birth of Miguel de Cervantes Saavedra. 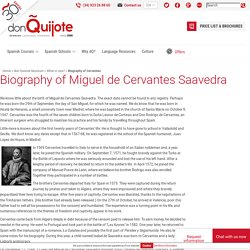 The exact date cannot be found in any registry. The Reason Cervantes Asked To Be Buried Under A Convent : Parallels. Archaeologists in Madrid study remains buried under the Convent of the Barefoot Trinitarians on Jan. 24. 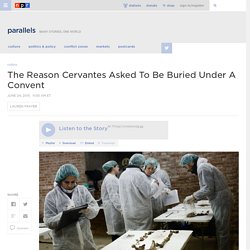 Tests proved the remains belonged to Miguel de Cervantes, the author of Don Quixote. Cervantes wanted to be buried at the convent because the nuns raised money and paid a ransom for his release when he was a young man held captive in North Africa. Daniel Ochoa de Olza/AP hide caption itoggle caption Daniel Ochoa de Olza/AP Archaeologists in Madrid study remains buried under the Convent of the Barefoot Trinitarians on Jan. 24.

Born in Stratford-upon-Avon, England, he was an important member of the Lord Chamberlain’s Men company of theatrical players from roughly 1594 onward. Written records give little indication of the way in which Shakespeare’s professional life molded his artistry. All that can be deduced is that, in his 20 years as a playwright, Shakespeare wrote plays that capture the complete range of human emotion and conflict. Known throughout the world, the works of William Shakespeare have been performed in countless hamlets, villages, cities and metropolises for more than 400 years. William Shakespeare: Plays Early Works: Histories and Comedies With the exception of the tragic love story Romeo and Juliet, William Shakespeare's first plays were mostly histories. Works after 1600: Tragedies and Tragicomedies Family.