The Plot to Kill George Washington. Mere days before the Declaration of Independence was signed in July 1776, 20,000 spectators gathered in a field where Manhattan’s modern-day Chinatown lies. 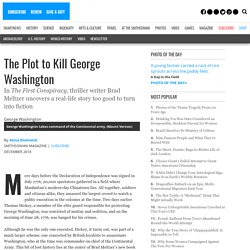 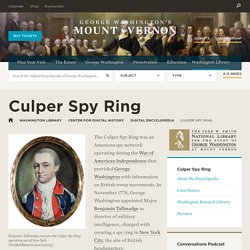 In November 1778, George Washington appointed Major Benjamin Tallmadge as director of military intelligence, charged with creating a spy ring in New York City, the site of British headquarters. This network became known as the Culper Spy Ring and operated successfully in and around New York City for five years, during which time no spy was ever unmasked. Indeed even Washington was ignorant of the spies' identities. Tallmadge's informants consisted of friends he made at school on Long Island, including Austin Roe, Caleb Brewster, Abraham Woodhull, and Anna Strong. Women's Service with the Revolutionary Army. Women in the American Revolution (article) Weapons and Equipment - Page 1 of 5 · George Washington's Mount Vernon. Of Rocks, Trees, Rifles, and Militia. Thoughts on Eighteenth-Century Military Tactics Text by Christopher Geist Photos by Dave Doody The popular image of militia in the Revolution was of sniping from the woods at British soldiers in the open. 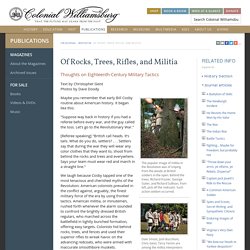 Behind the trees, Richard Frazier, George Suiter, and Richard Sullivan, from left, pick off the redcoats. Such action seldom occurred. Dale Smoot, Josh Bucchioni, Chris Geist, Terry Yemm are among the militia interpreters parading across Market Square with their Magazine weapons. Reenactors portray the redcoats in their standard lines of battle: rows of infantrymen, bayonets fixed to muskets, who loaded and fired in quick order. The Rifles That Made America. Revolutionary War Artillery - Yorktown Battlefield Part of Colonial National Historical Park. Essentials. You asked, we answered: What did soldiers eat during the Revolutionary War? After answering a question about what may have been in the pockets of Revolutionary War soldiers, another Revolutionary War question came in from a Facebook follower. 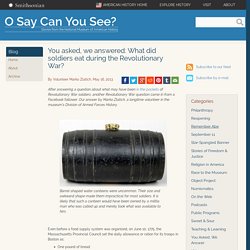 Our answer by Marko Zlatich, a longtime volunteer in the museum's Division of Armed Forces History. Barrel-shaped water canteens were uncommon. Their size and awkward shape made them impractical for most soldiers. It is likely that such a canteen would have been owned by a militia man who was called up and merely took what was available to him. Even before a food supply system was organized, on June 10, 1775, the Massachusetts Provincial Council set the daily allowance or ration for its troops in Boston as: George Washington's well-appointed personal camp chest, or "mess kit," enabled him to dine in a manner reflecting his position as commander of the Continental Army. Using Revolutionary War Pension Files to Find Family Information.

The American Revolution, 1763–1783. The British colonists of mainland North America had great hopes for the future in 1763, when the Peace of Paris formally ended the Seven Years’ War. 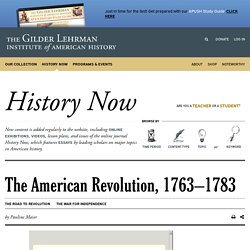 Since the late seventeenth century, their lives had been disrupted by a series of wars between Britain and the "Catholic Powers," France and Spain. Now, however, a triumphant Britain took title to Spanish Florida, French Canada, and all of Louisiana east of the Mississippi. With the British flag flying over so much of the North American continent, the colonists looked forward to a time of uninterrupted peace, expansion, and prosperity. Deeply proud of the British victory and their own identity as "free Britons," they neither wanted nor foresaw what the next two decades would bring—independence, revolution, and yet another war. 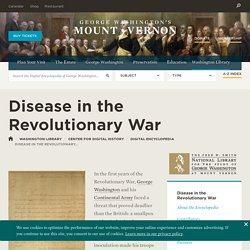 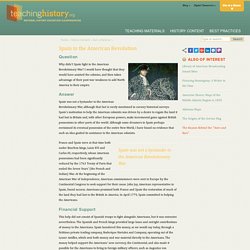 I would have thought that they would have assisted the colonies, and then taken advantage of their post-war weakness to add North America to their empire. Answer Spain was not a bystander to the American Revolutionary War, although that fact is rarely mentioned in cursory historical surveys. Spain's motivation to help the American colonists was driven by a desire to regain the land it had lost to Britain and, with other European powers, make incremental gains against British possessions in other parts of the world. 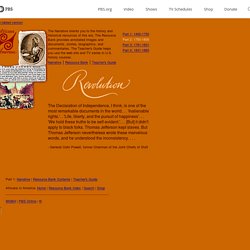 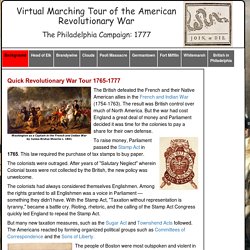 The result was British control over much of North America. But the war had cost England a great deal of money and Parliament decided it was time for the colonies to pay a share for their own defense. To raise money, Parliament passed the Stamp Act in 1765. This law required the purchase of tax stamps to buy paper. 1776–1783. During the American Revolution, the American colonies faced the significant challenge of conducting international diplomacy and seeking the international support it needed to fight against the British. 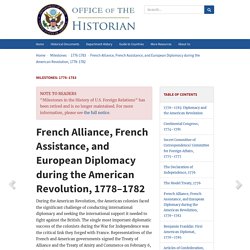 As a recent scholar has observed, "by turning colonial resistance into a righteous cause, and by crying the message to all ranks in all parts of the colonies, ministers did the work of secular radicalism and did it better. " Ministers served the American cause in many capacities during the Revolution: as military chaplains, as penmen for committees of correspondence, and as members of state legislatures, constitutional conventions and the national Congress. Some even took up arms, leading Continental troops in battle. Mountvernon. Guide To The Revolutionary War. Photo showing recreated Patriot Militiamen of the American Revolution in various states of undress. John W. Penney. 2011. The American Revolution was an epic political and military struggle waged between 1765 and 1783 when 13 of Britain’s North American colonies rejected its imperial rule.

The protest began in opposition to taxes levied without colonial representation by the British monarchy and Parliament. As the political disagreements grew, they triggered a perpetual cycle of defiant acts and punitive laws that led to open rebellion. Prelude to Independence. Guide To The Revolutionary War. The Revolutionary War · George Washington's Mount Vernon. George Washington is appointed by Congress as commander-in-chief of the Continental Army Attending the Second Continental Congress in military uniform, George Washington was appointed as commander-in-chief of the Continental Army by his fellow congressmen.

Washington takes command at Cambridge, MA After his appointment as Commander-in-Chief in Philadelphia, Washington traveled to Cambridge, Massachusetts to take command of the newly formed Continental Army positioned around Boston. Washington commences the bombardment of British positions in and around Boston With the arrival of heavy guns from Fort Ticonderoga, Washington made the bold decision to place these artillery pieces upon Dorchester Heights. American Revolution. The American Revolution- American Memory Timeline- Classroom Presentation. Until the end of the Seven Years' War in 1763, few colonists in British North America objected to their place in the British Empire. Colonists in British America reaped many benefits from the British imperial system and bore few costs for those benefits. The American Revolution. Few events possess as much historical significance as the rebellion of thirteen British colonies in North America.

Until early in 1778 the conflict was a civil war within the British Empire, but afterward it became an international war as France (in 1778) and Spain (in 1779) joined the colonies against Britain. Revolutionary War.