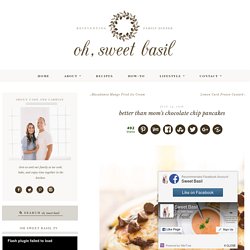 Just make one little change to our recipe for Melt in Your Mouth Buttermilk Pancakes and your husband will want to marry you all over again. But seriously, he will. Sorry Mom, I adore you more than the pancakes but I also think my version is better than what we grew up eating. It’s all about that last swirl of melted butter. I don’t understand why butter is so wonderful but it is. Browning butter is really easy, and even more easy to screw up. It will make your pancakes taste like a chocolate chip cookie and that is NEVER a bad thing. Banana Chocolate Chip Pancakes. Sep 17 Banana Chocolate Chip Pancakes If your kids beg for pancakes but balk at the thought of banana pancakes, make these. 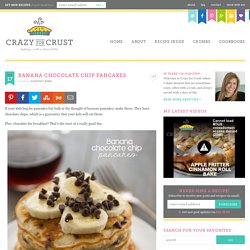 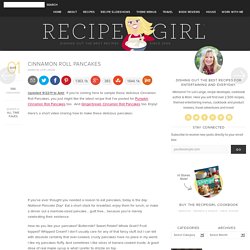 And Gingerbread- Cinnamon Roll Pancakes too. Enjoy! Here’s a short video sharing how to make these delicious pancakes: If you’ve ever thought you needed a reason to eat pancakes, today is the day: National Pancake Day! Eat a short stack for breakfast, enjoy them for lunch, or make a dinner out a manhole-sized pancake… guilt free… because you’re merely celebrating their existence. Vanilla Cinnamon Buttermilk Pancakes - The Chunky Chef. Hot Cocoa Pancakes. Banana Bread Pancakes with Cream Cheese Glaze. I am in love with these pancakes! 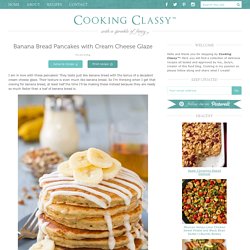 Apple Pie Pancakes with Vanilla Maple Syrup. It’s that time of year where apples are starting to turn up everywhere. 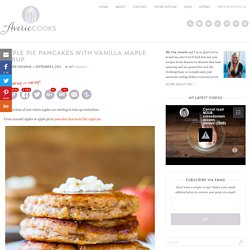 From caramel apples to apple pie to pancakes that taste like apple pie. I confess, I’m not much of a pie-maker. We really don’t need a whole pie at once, and I tend to make bars and cookies because they seem to disappear quicker than a whole pie does. These pancakes are the answer to my pie-less prayers. And they’re much faster to make than making a pie. The recipe is adapted from my friend. French Toast Pancakes. Fluffy Banana Pancakes. I love pancakes. 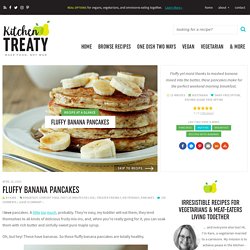 A little too much, probably. They’re easy, my toddler will eat them, they lend themselves to all kinds of delicious fruity mix-ins, and, when you’re really going for it, you can soak them with rich butter and sinfully-sweet pure maple syrup. Oh, but hey! These have bananas. So these fluffy banana pancakes are totally healthy. Okay, so, not really. Thick, airy, fluffy pancakes are good for the soul just as much as hard, cakey pancakes are bad for the soul.

There are several methods out there for making your pancakes light and fluffy. Free Easy Weeknight Dinners eBook Subscribe to the Kitchen Treaty email list and receive new recipes or my weekly newsletter for free! Me, I take a lazier approach to making fluffier pancakes. Fluffy yet moist thanks to mashed banana mixed into the batter, these pancakes make for the perfect weekend morning breakfast. Got leftovers? Homemade Fluffy Pancake Mix - Sugar Dish Me. Buffet Pancake Dippers. How fun are these Buffet Pancake Dippers! 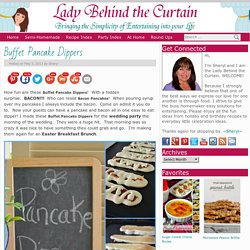 With a hidden surprise. BACON!!! Who can resist Bacon Pancakes! When pouring syrup over my pancakes I always include the bacon. Come on admit it you do to. PLUS, I lightened it up a bit by using the “Heart Smart” Bisquick, lite syrup and center cut bacon. Old Fashioned Whole Wheat Apple Pancakes. Apple cinnamon yogurt pancakes. Follow Julia on Pinterest and Facebook to get more recipes and dinner ideas for your weekly meal planning! 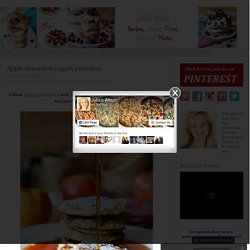 When I saw this recipe for apple cinnamon pancakes in one of the earlier posts on Smitten Kitchen, I immediately knew that I will be including them into my weekend breakfast recipe repertoire. Regular plain pancakes always seem, well, too plain. Pancakes filled with shredded apples? That’s my kind of pancake – not too plain!

Not to forget about added spices: vanilla and cinnamon. I’ve made several changes to the recipe. I added cinnamon and vanilla to the batter because the comments and Deb herself said that her pancakes tasted somewhat bland and needed some flavor addition. I also halved the recipe, using only 1 cup of flour instead of 2 and using only 1 apple instead of 3. Silk Banana Chocolate Chip Oatmeal Pancakes - Courtney's Sweets. Meyer Lemon Syrup. Holy Hannah. 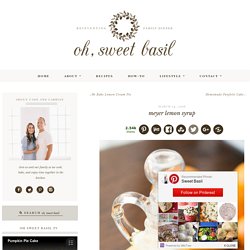 This stuff is fantastic. You may not think about lemon syrup when you normally thimk about pancakes or any hot breakfast, but please let me convince you. The other day I had a bunch of meyer lemons to use and it was a saturday so we were wanting something special for breakfast.