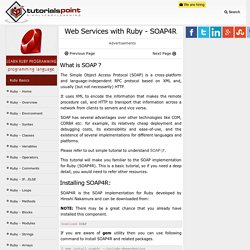 The Simple Object Access Protocol (SOAP) is a cross-platform and language-independent RPC protocol based on XML and, usually (but not necessarily) HTTP. It uses XML to encode the information that makes the remote procedure call, and HTTP to transport that information across a network from clients to servers and vice versa. SOAP has several advantages over other technologies like COM, CORBA etc: for example, its relatively cheap deployment and debugging costs, its extensibility and ease-of-use, and the existence of several implementations for different languages and platforms. Please refer to out simple tutorial to understand SOAP. This tutorial will make you familiar to the SOAP implementation for Ruby (SOAP4R). Installing SOAP4R: SOAP4R is the SOAP implementation for Ruby developed by Hiroshi Nakamura and can be downloaded from: NOTE: There may be a great chance that you already have installed this component. Download SOAP $ gem install soap4r --include-dependencies Example: #! 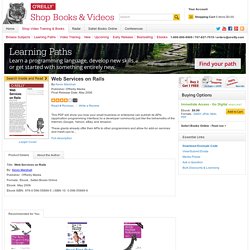 Thanks to standards like SOAP and XML-RPC as well as frameworks such as Ruby on Rails, developers can easily create web service clients and servers with fewer errors. This guide looks at how Ruby on Rails makes building web service clients and servers simple and fun, with plenty of working examples and code details so you can see just how everything works. ISBN: 0-596-52796-9, 32 pages, $9.99 US, $12.99 CA Everything is true except "plenty of working examples".

Some of the topics covered include: Building clients, building servers, web services basics, web services signatures, WSDL files, and web service architectures. I thought the discriminations made between :expects and :returns; ActiveRecord::Base and ActionWebService::Struct types; :direct and :layered and :delegated were all straightforward and well defined without going overboard. 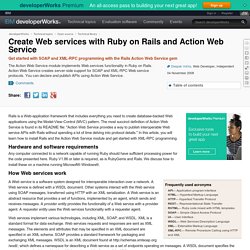 The most succinct definition of Action Web Service is found in its README file: "Action Web Service provides a way to publish interoperable Web service APIs with Rails without spending a lot of time delving into protocol details. " In this article, you will learn how to install Rails and the Action Web Service module and get started with XML-RPC programming.

Hardware and software requirements Any computer connected to a network capable of running Ruby should have sufficient processing power for the code presented here. Ruby V1.86 or later is required, as is RubyGems and Rails. How Web services work A Web service is a software system designed for interoperable interaction over a network. Web services implement various technologies, including XML, SOAP, and WSDL. Back to top Creating a Web service Figure 4. Web services API class Table 1. Create Web services with Ruby on Rails and Action Web Service.