#BlackOnCampus hashtag exposes racism of college life. A long history of bubbling racial tensions at the University of Missouri exploded this week. 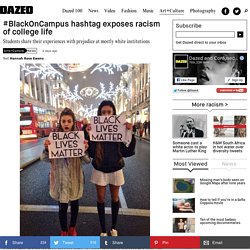 The university’s president and chancellor both resigned as students protested that they’d mishandled serious reports of racism on campus. Students demanded their resignation by going on a hunger strike. Death threats directed at students were published on social media, leaving them afraid to attend classes on Mizzou campus. Police arrested a white man who made the threats. While this is an extreme and worrying example of college racism, it’s by no means an isolated incident. Teenager becomes her school’s first transgender cheerleader.

After struggling for years with her gender and sexuality, a California teenager has beaten the odds to become the first transgender cheerleader on her high school squad. 18-year-old Anry Fuentes, of Denair school near San Francisco, realised she was transgender while still a junior – and officially began her transition earlier this year. 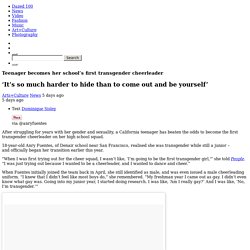 “When I was first trying out for the cheer squad, I wasn’t like, ’I’m going to be the first transgender girl,'” she told People. “I was just trying out because I wanted to be a cheerleader, and I wanted to dance and cheer.” When Fuentes initially joined the team back in April, she still identified as male, and was even issued a male cheerleading uniform. “I knew that I didn’t feel like most boys do,” she remembered. However, her team have apparently been extremely understanding ever since the revelation, with Fuentes praising their “super-sweet” support. #NotAllMuslims shows that society does blame Muslims. From around 9.20pm on Friday evening onwards, a series of horrifying terror attacks began to hit central Paris that took at least 129 lives and left the world in shock. 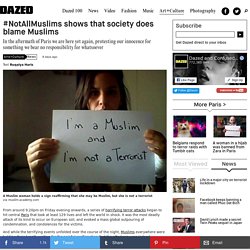 It was the most deadly attack of its kind to occur on European soil, and evoked a mass global outpouring of condemnation, and condolences for the victims. And while the terrifying events unfolded over the course of the night, Muslims everywhere were holding their breath waiting for the painful confirmation that the attackers were indeed self-proclaimed Muslims, killing in the name of Islam. And upon hearing the news, our hearts sank.

For both the victims of this terrible tragedy committed in our name, and for those that would suffer later as a result. Almost immediately, I saw Muslims flocking to tweet the #NotAllMuslims hashtag, and found myself asking "Is that really necessary? What is always ignored are Muslims' attempts to counter ISIS ideology. The goal of these attacks are clear. Teen Modern Family star shuts down Instagram slut-shamers. Increasingly, Instagram is proving itself a hotbed for feminist dialogue. 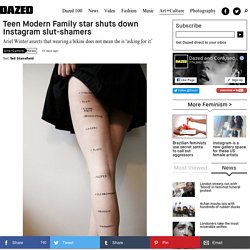 Case in point: 17-year-old Modern Family star Ariel Winter’s eloquent shutdown of Instagram users who implied she was “asking for it” after she posted a picture of herself in a bikini with her nieces. The young actress posted said picture on Saturday and subsequently received a barrage of misogynistic comments. However, Winter didn’t take this lying down. Addressing one anonymous user directly, she wrote, “Hey @iambackvato there is no need for this kind of energy on my Instagram.

This is a photo of me and my nieces – there is no need to turn it into anything else. Alongside these comments were some from (generally much-older) men remarking on the sexual attractiveness of Winter’s body – despite her age. Jennifer Aniston Talks Sexism And Inequal Pay In Hollywood. Thanks to the Sony email hack we now know that, like in many other careers, when it comes to acting women are paid less than men. 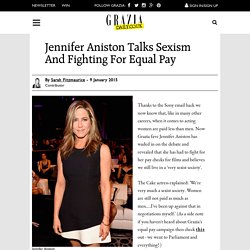 Now Grazia fave Jennifer Aniston has waded in on the debate and revealed that she has had to fight for her pay checks for films and believes we still live in a 'very sexist society'. The Cake actress explained: 'We're very much a sexist society. Women are still not paid as much as men....I've been up against that in negotiations myself.' (As a side note if you haven't heard about Grazia's equal pay campaign then check this out - we went to Parliament and everything! ) But back to Jennifer, the starlet also spoke out about the attention female stars get over their appearance and the criticism she has faced over the years. Tampon Tax: Surrey MPs defend their vote to keep 'luxury' tax rate. DEBATE: Sam Gyimah, Crispin Blunt and Sir Paul Beresford Comments (0) SURREY MPs voted against scrapping the controversial "tampon tax", classing hygiene products as "non-essential, luxury items". 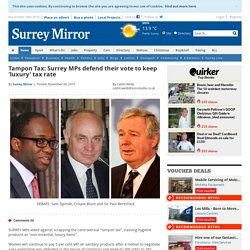 Women will continue to pay 5 per cent VAT on sanitary products after a motion to negotiate a tax exemption was defeated in the House of Commons last week by 305 votes to 287. Both East Surrey MP Sam Gyimah and Mole Valley MP Sir Paul Beresford voted against scrapping the levy. And Reigate MP Crispin Blunt admits he would have done the same. Speaking of his decision Sir Paul said: "I haven't really had time to think about it, I followed my party.

Only three Tory MPs rebelled and voted for a Labour-proposed amendment to the Government Finance Bill, which would have seen the tax rate renegotiated with the EU.