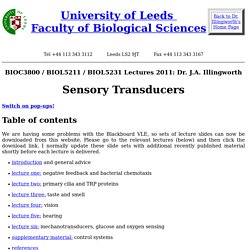 J.A. Illingworth Switch on pop-ups! Table of contents We are having some problems with the Blackboard VLE, so sets of lecture slides can now be downloaded from this website. Introduction and general advicelecture one: negative feedback and bacterial chemotaxislecture two: primary cilia and TRP proteinslecture three: taste and smelllecture four: visionlecture five: hearinglecture six: mechanotransducers, glucose and oxygen sensingsupplementary material: control systemsreferences Introduction: This course will focus on the biochemical processes that convert information from the internal and external environments into hormonal or neuronal signals.

Sensory impairment is a significant human problem that affects a large proportion of the population at some stage in their lives. Textbooks: Much of this material has been discovered in the last five years, some of it in the last few months. Scha4_c001f004.gif (1046×877) Pathway Central: mTOR Pathway. mTOR (Mammalian Target of Rapamycin) is a 289-kDa serine/threonine protein kinase and a member of the PIKK (Phosphatidylinositol 3-Kinase-related Kinase) family. 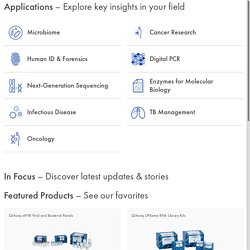 The protein consists of a Catalytic Kinase domain, an FRB (FKBP12-Rapamycin Binding) domain, a putative Auto-inhibitory domain (Repressor domain) near the C-terminus and up to 20 tandemly repeated HEAT motifs at the Amino terminus, as well as FAT (FRAP-ATM-TRRAP) and FATC (FAT C-terminus) domains. The C-terminus of TOR is highly homologous to the catalytic domain of PI3K (Phosphatidylinositol 3-Kinase). TOR proteins are evolutionarily conserved from yeast to human in the C-domain, with human, mouse, and rat mTOR proteins sharing 95% identity at the amino acid level. The human mTOR gene encodes a protein of 2549 amino acids with 42% and 45% sequence identity to yeast TOR1 and TOR2, respectively. mTOR functions as a central element in a signaling pathway involved in the control of cell growth and proliferation (Ref.1). Ashley-vg - Sensory Organs. Cranial Nerves. Cranial nerves: Functional components. Books and articles. Nervous System Worksheet.pdf. 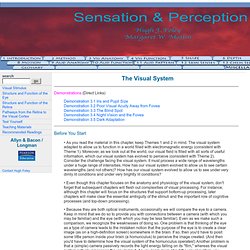 The visual system adapted to allow us to function in a world filled with electromagnetic energy (consistent with Theme 1). Moreover, as we look out at the world, our visual field is filled with all sorts of useful information, which our visual system has evolved to perceive (consistent with Theme 2). Visual Stimulus • Our visual system is sensitive to a portion of the electromagnetic spectrum (in wavelength, the typical way of talking about light waves, from a bit less than 400 nm to a bit more than 700 nm). 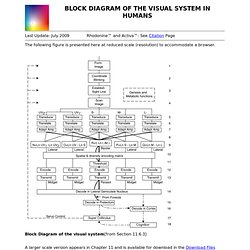 Block Diagram of the visual system[from Section 11.6.3] A larger scale version appears in Chapter 11 and is available for download in the Download Files area reached from the Site navigation bar. The figure attempts to show the signal flow diagram for a generic visual system. Not all of the features shown are used in every species or family of animal system. The central channel, R, represents the luminance channel of vision. The importance of servomechanism feedback in vision is emphasized by the feedback paths shown on the left. The labels shown below individual boxes are those generally associated with the function in the literature.

The individual adaptation amplifiers in each spectral channel should be noted. Note the circular loops associated with signals from the foveola. Return to the website home page.