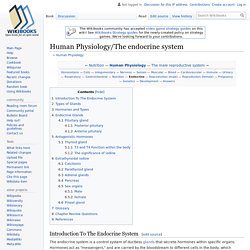 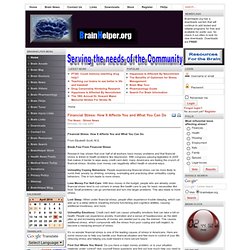 Break Free From Financial Stress Research has shown that over half of all workers have money problems and that financial stress is linked to health problems like depression. With congress passing legislation in 2005 that makes it harder to wipe away credit card debt, many Americans are feeling the crunch of financial stress. Anxiety over money can negatively affect health in several ways: Unhealthy Coping Behaviors: People experiencing financial stress can be more likely to numb their anxiety by drinking, smoking, overeating and practicing other unhealthy coping behaviors. Less Money For Self-Care: With less money in the budget, people who are already under financial stress tend to cut corners in areas like health care to pay for basic necessities like food.

Unhealthy Emotions: Credit card debt can cause unhealthy emotions that can take a toll on health. How unrealistic optimism is maintained in the f... [Nat Neurosci. 2011. Are low and high number magnitudes proce... [Int J Psychophysiol. 2012. The affective impact of financial skewness on neura... [PLoS One. 2011. Led into temptation? Rewarding brand logos bias the... [PLoS One. 2012. Rick Kahler: your brain's response to financial stress. 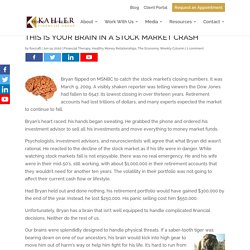 It was March 9, 2009. A visibly shaken reporter was telling viewers the Dow Jones had fallen to 6547, its lowest closing in over thirteen years. Retirement accounts had lost trillions of dollars, and many experts expected the market to continue to fall. Bryan’s heart raced; his hands began sweating. He grabbed the phone and ordered his investment advisor to sell all his investments and move everything to money market funds.

Psychologists, investment advisors, and neuroscientists will agree that what Bryan did wasn’t rational. Had Bryan held out and done nothing, his retirement portfolio would have gained $300,000 by the end of the year. Unfortunately, Bryan has a brain that isn’t well equipped to handle complicated financial decisions. Our brains were splendidly designed to handle physical threats. Top 5 Ways to Lower Your Financial Stress" If fear of making the "wrong" choices about your finances has left you mired in indecision, imagine how people who think they have no choice at all must feel. 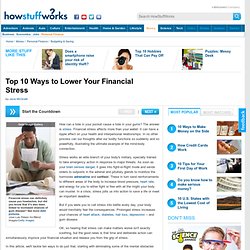 John Caskey, an economics professor at Swarthmore College, interviewed residents in two of America's poorest communities. "They instead talked about the stress," he said. "In many cases, people didn't save not because they actually couldn't, but because they believed they couldn't" [source: Snyder]. When you're late on the rent and can't keep the utilities on, the idea of opening a savings account may seem as far-fetched as a picnic on the moon; but the truth is that all of us, even the poorest, have financial choices. Traders’ brains: Rogue hormones. Early Exposure to Stress at Home Affects Girls' Brains, Study Says. MONDAY, Nov. 12 (HealthDay News) -- Girls who are born into families with high levels of stress are more likely to suffer from anxiety and disruptions in brain function as teenagers, new research suggests. 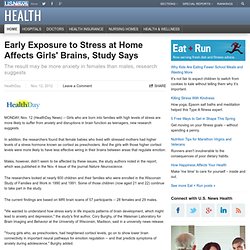 In addition, the researchers found that female babies who lived with stressed mothers had higher levels of a stress hormone known as cortisol as preschoolers. And the girls with those higher cortisol levels were more likely to have less effective wiring in their brains between areas that regulate emotion. Males, however, didn't seem to be affected by these issues, the study authors noted in the report, which was published in the Nov. 4 issue of the journal Nature Neuroscience. A Unique Female Stress Response: Tend-and-Befriend. Is the answer to financial stress found in the bedroom? 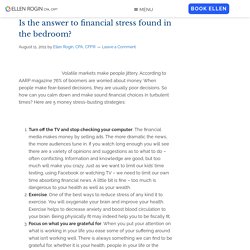 According to AARP magazine 76% of boomers are worried about money. When people make fear-based decisions, they are usually poor decisions. So how can you calm down and make sound financial choices in turbulent times? Shelley E. Taylor Lab: Members. Members Director DR. 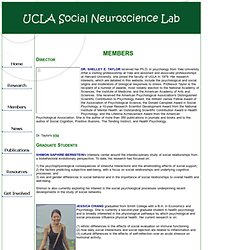 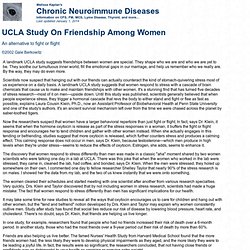 They shape who we are and who we are yet to be. They soothe our tumultuous inner world, fill the emotional gaps in our marriage, and help us remember who we really are. By the way, they may do even more. Stressed Out? It Might Be Messing with Your Memory. Kevin Van Aelst Everyone has had an experience like this one: You're running late for an important meeting, frantically tearing apart the house on a desperate search for the car keys you just put down...somewhere. 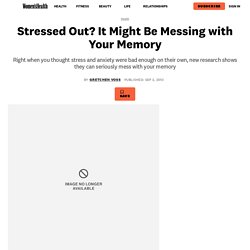 Or at the other extreme, you spent weeks freaking out over an upcoming presentation only to deliver all the key points with Oscar-accepting eloquence when the day arrives. Age Associated Memory Impairment. Partial Recall: Why Memory Fades with Age. As we age, it becomes harder and harder to recall names, dates—even where we put down our keys. 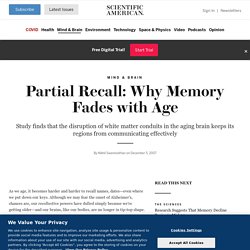 Although we may fear the onset of Alzheimer's, chances are, our recollective powers have dulled simply because we're getting older—and our brains, like our bodies, are no longer in tip-top shape. But what is it that actually causes memory and other cognitive abilities to go soft with senescence? Previous research has shown that bundles of axons (tubular projections sent out by neurons to signal other nerve cells) wither over time. These conduits, collectively referred to as white matter, help connect different regions of the brain to allow for proper information processing. Now, researchers have found that these white matter pathways erode as we age, impairing communication or "cross talk'' between different brain areas. Stress Statistics. Exercise Fuels the Brain's Stress Buffers. Exercise may improve mental health by helping the brain cope better with stress, according to research into the effect of exercise on neurochemicals involved in the body's stress response.

Preliminary evidence suggests that physically active people have lower rates of anxiety and depression than sedentary people. But little work has focused on why that should be. So to determine how exercise might bring about its mental health benefits, some researchers are looking at possible links between exercise and brain chemicals associated with stress, anxiety and depression.

Worrying Well: How Your Brain Can Turn Anxiety and Stress Into Calmness and Confidence. The Biology of Bubble and Crash. The Human Brain - Stress. Chronic over-secretion of stress hormones adversely affects brain function, especially memory. Too much cortisol can prevent the brain from laying down a new memory, or from accessing already existing memories.

The renowned brain researcher, Robert M. Sapolsky, has shown that sustained stress can damage the hippocampus , the part of the limbic brain which is central to learning and memory. Stressed brain, diseased heart: A review on th... [Int J Cardiol. 2012. Chronic Stress Can Shrink Your Brain. Stress May Cause The Brain To Become Disconnected. Does stress damage the brain? In the March 1st issue of Biological Psychiatry a paper by Tibor Hajszan and colleagues provides an important new chapter to this question. This issue emerged in the 1990’s as an important clinical question with the observation by J. Douglas Bremner and colleagues, then at the VA National Center for Posttraumatic Stress Disorder (PTSD), that hippocampal volume was reduced in combat veterans with PTSD.

This finding was replicated by several, but not all, groups. Stress causes brain shrinkage. A new Yale study shows that stress can reduce brain volume and function, even in otherwise healthy individuals. Researchers from the Yale Stress Center analyzed the effect of experiencing stressful life events. The study, published Jan. 5 in the journal Biological Psychiatry, concluded that stress can decrease the amount of gray matter in the brain and make it more difficult for people to manage stressful situations in the future. It also may aid effects to prevent stress-related disorders through screening and vigilance. According to Rajita Sinha, program director for the Yale Stress Center and professor of psychiatry at the Yale School of Medicine, the study is unique in analyzing a healthy human population.

Learning: Stressed people use different strategies and brain regions. Why we fight: Men check out in stressful situations, while women show increased brain coordination when looking at angry faces. A new study by USC researchers reveals that stressed men looking at angry faces had diminished activity in the brain regions responsible for understanding others' feelings. Employee Brain on Stress Can Quash Creativity And Competitive Edge. Stress Cortisol Connection. Fortunately, fitness professional are already doing many physical activities to help their clients manage stress. Many types of aerobic and anaerobic exercise have been shown to be effective interventions in reducing or managing stress. Basics - Brain Is a Co-Conspirator in a Vicious Stress Loop. The stressed prefrontal cortex. Left? Right! [Brain Behav Immun. 2008.

Stress and the brain: Under pressure. Central role of the brain in stress and ada... [Ann N Y Acad Sci. 2010. Emotional stress can change brain function. Research conducted by Iaroslav Savtchouk, a graduate student, and S. June Liu, PhD, Associate Professor of Cell Biology and Anatomy at LSU Health Sciences Center New Orleans, has shown that a single exposure to acute stress affected information processing in the cerebellum -- the area of the brain responsible for motor control and movement coordination and also involved in learning and memory formation.

The work is published in the January 12, 2011 issue of The Journal of Neuroscience. The researchers found that a five-minute exposure to the odor of a predator produced the insertion of receptors containing GluR2 at the connections (synapses) between nerve cells in the brain. GluR2 is a subunit of a receptor in the central nervous system that regulates the transfer of electrical impulses between nerve cells, or neurons.