Team Handbook. Why products built by large teams fail so often. There’s an old anecdote about a chicken and a pig. 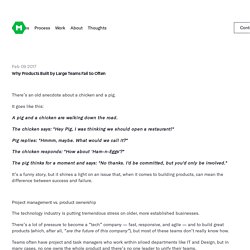 It goes like this: A pig and a chicken are walking down the road. The chicken says: "Hey Pig, I was thinking we should open a restaurant! " Pig replies: "Hmmm, maybe. What would we call it? " The chicken responds: "How about 'Ham-n-Eggs'? " The pig thinks for a moment and says: "No thanks. It’s a funny story, but it shines a light on an issue that, when it comes to building products, can mean the difference between success and failure. Project management vs. product ownership The technology industry is putting tremendous stress on older, more established businesses. Radio - Listen to Free Internet Radio, Find New Music. 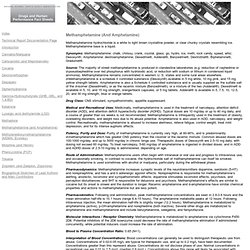 Methamphetamine base is a liquid. Synonyms: Methamphetamine: chalk, chrissy, crank, crystal, glass, go, hydro, ice, meth, rock candy, speed, whiz; Desoxyn®; Amphetamine: dextroamphetamine; Dexedrine®, Adderall®, Benzedrine®, DextroStat®, Biphetamine®, Gradumet®. Source: The majority of street methamphetamine is produced in clandestine laboratories (e.g. reduction of l-ephedrine or d-pseudoephedrine over red phosphorus with hydroiodic acid, or reduction with sodium or lithium in condensed liquid ammonia). Methamphetamine remains concentrated in western U. S. states and some rural areas elsewhere. d-Methamphetamine is a schedule II controlled substance (Desoxyn®) available in 5 mg white, 10 mg pink, and 15 mg yellow strength tablets. The Mindset List. Welcome to the Beloit College Mindset List for this year’s entering college class of 2018 The College class of 2018, starting their first year on campus this fall, arrives with a grasp of their surroundings quite distinct from that of their mentors. 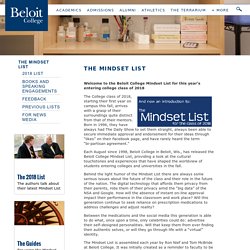 Born in 1996, they have always had The Daily Show to set them straight, always been able to secure immediate approval and endorsement for their ideas through “likes” on their Facebook page, and have rarely heard the term “bi-partisan agreement.” Each August since 1998, Beloit College in Beloit, Wis., has released the Beloit College Mindset List, providing a look at the cultural touchstones and experiences that have shaped the worldview of students entering colleges and universities in the fall. Behind the light humor of the Mindset List there are always some serious issues about the future of the class and their role in the future of the nation. The Mindset List is assembled each year by Ron Nief and Tom McBride at Beloit College. Murray_income_iq.pdf. Organizational Communication. 11.pdf. Reading Comprehension Test. Custers_longterm_retention_2010.pdf. The New Way Doctors Learn.

Turning a medical student into a doctor takes a whole lot of knowledge. 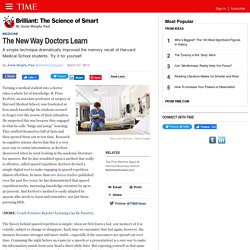 B. Price Kerfoot, an associate professor of surgery at Harvard Medical School, was frustrated at how much knowledge his students seemed to forget over the course of their education. He suspected this was because they engaged in what he calls “binge and purge” learning: They stuffed themselves full of facts and then spewed them out at test time. Research in cognitive science shows that this is a very poor way to retain information, as Kerfoot discovered when he went looking in the academic literature for answers. But he also stumbled upon a method that really is effective, called spaced repetition. (MORE: Couch Potatoes Rejoice! The theory behind spaced repetition is simple: when we first learn a fact, our memory of it is volatile, subject to change or disappear. (MORE: The American Hopsital: The Most Dangerous Place?) How can you learn like one of Kerfoot’s Harvard Medical School residents?

The Benefits of Distraction and Overstimulation. Over the last twenty years, Meyer and a host of other researchers have proved again and again that multitasking, at least as our culture has come to know and love and institutionalize it, is a myth. 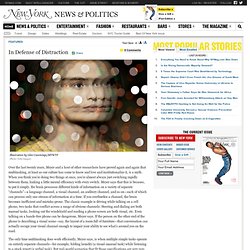 When you think you’re doing two things at once, you’re almost always just switching rapidly between them, leaking a little mental efficiency with every switch. Meyer says that this is because, to put it simply, the brain processes different kinds of information on a variety of separate “channels”—a language channel, a visual channel, an auditory channel, and so on—each of which can process only one stream of information at a time. If you overburden a channel, the brain becomes inefficient and mistake-prone. Benefits of Multitasking. Everyone talks about how horrible doing several things at one time is, but there are some great advantages, too. 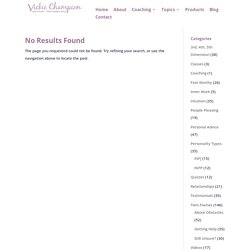 Call yourself an expert multitasker. Don’t have to waste time prioritizing. Save money not hiring helpers. Can eliminate the words rest and relax from your vocabulary. Get your highs from the sense of urgency that it imposes. See, I told you. If you help balancing your need to do several tasks at once, contact Vickie Champion for a discovery coaching and consulting session. By Vickie Champion. The Benefits of Distraction and Overstimulation.