Attentional modulation of reward processing in the human brain. Effort increases sensitivity to reward and loss magnitude in the human brain. And causal attribution (for details on the subscales, see MethodologicalDetails in Supplementary Material). 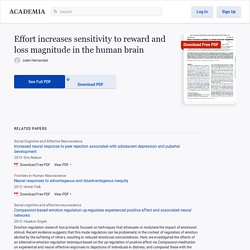 We implemented this question-naire because our experimental design aims at inducing an internalattribution of a reward in the high effort condition. Therefore, theeffects of effort on neural reward- and loss-processing shoulddepend on the predominant attribution style of the subjects. fMRI scanning and analysis Scanningwasperformedona1.5-TAvantoScanner(Siemens,Erlangen,Germany) using an 8-channel head coil. Neuropsychopharmacology - Deep Brain Stimulation of the Human Reward System for Major Depression[mdash]Rationale, Outcomes and Outlook. Effort-Based Cost–Benefit Valuation and the Human Brain. Paula L. 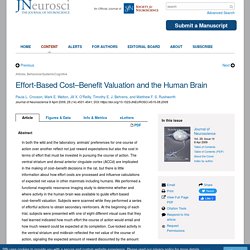 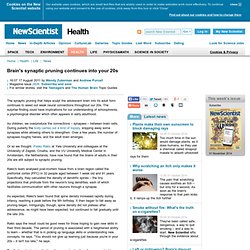 The surprise finding could have implications for our understanding of schizophrenia, a psychological disorder which often appears in early adulthood. As children, we overproduce the connections – synapses – between brain cells. During puberty the body carries out a kind of topiary, snipping away some synapses while allowing others to strengthen. Over a few years, the number of synapses roughly halves, and the adult brain emerges.

Or so we thought. Rakic's team analysed post-mortem tissue from a brain region called the prefrontal cortex (PFC) in 32 people aged between 1 week old and 91 years. As expected, Rakic's team found that spine density increased rapidly during infancy, reaching a peak before the 9th birthday. Rakic says the result could be good news for those hoping to gain new skills in their third decade. Dynamic mapping of human cortical development during childhood through early adulthood. Proceedings of the National Academy of Sciences of the United States of Americawww.pnas.org Author Affiliations Communicated by Leslie G. 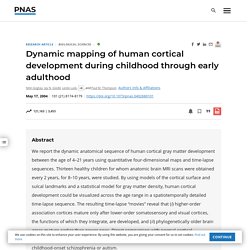 Ungerleider, National Institutes of Health, Bethesda, MD, April 15, 2004 (received for review January 7, 2004) Abstract We report the dynamic anatomical sequence of human cortical gray matter development between the age of 4–21 years using quantitative four-dimensional maps and time-lapse sequences. Human brain development is structurally and functionally a nonlinear process (1–3), and understanding normal brain maturation is essential for understanding neurodevelopmental disorders (4, 5). The result is a dynamic map of GM maturation in the pre- and postpubertal period. Methods Subjects. Table 1.Demographics of the study sample Image Processing and Analysis. An image-analysis technique known as cortical pattern matching (25–27) was used to better localize cortical differences over time and increase the power to detect systematic changes (25).

Computer games stunt teen brains. Computer games are creating a dumbed-down generation of children far more disposed to violence than their parents, according to a controversial new study. 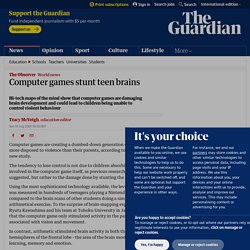 The tendency to lose control is not due to children absorbing the aggression involved in the computer game itself, as previous researchers have suggested, but rather to the damage done by stunting the developing mind. Using the most sophisticated technology available, the level of brain activity was measured in hundreds of teenagers playing a Nintendo game and compared to the brain scans of other students doing a simple, repetitive arithmetical exercise. To the surprise of brain-mapping expert Professor Ryuta Kawashima and his team at Tohoku University in Japan, it was found that the computer game only stimulated activity in the parts of the brain associated with vision and movement.

Whenever you use self-control to refrain from lashing out or doing something you should not, the frontal lobe is hard at work. tracy.mcveigh@observer.co.uk. Scans reveal intricate brain wiring. 16 February 2013Last updated at 20:28 ET By Pallab Ghosh Science correspondent, BBC News, Boston The BBC's Pallab Ghosh gets a look at how his brain is wired Scientists are set to release the first batch of data from a project designed to create the first map of the human brain. 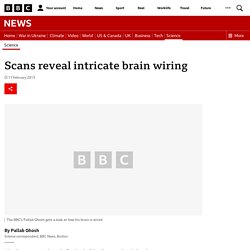 The project could help shed light on why some people are naturally scientific, musical or artistic. Some of the first images were shown at the American Association for the Advancement of Science meeting in Boston. Time for new thinking about sensitive periods. Longitudinal Development of Human Brain Wiring Continues from Childhood into Adulthood. Introduction Childhood and adolescence are periods of significant change, with behavioral, emotional, hormonal, and cognitive processes undergoing maturation. 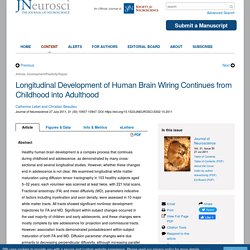 Related:  Futurology   -  the theory of everything   -  Neuropsychology   -  Education   -  Enterprise