ELI5: Why is fruit/vegetables so cheap despite the time and resources needed to produce them? : explainlikeimfive. Reuby has her moment✨ : BackYardChickens. Can You Hypnotize a Chicken? Hypnotism is a pretty neat party trick—but is it a peculiarly human vulnerability? 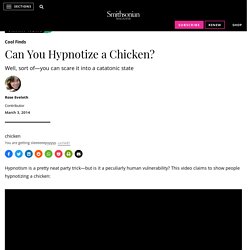 This video claims to show people hypnotizing a chicken: This trick often is often called “animal hypnosis,” but, according to Dimitrios Beredimas, an agronomist and blogger at Strange Animals, it’s actually called “tonic immobility" and is quite different from the kind of hypnosis that most of us think of. Lead poisoning in Chickens. Lead poisoning is an increasingly common problem in backyard chickens living in urban environments. 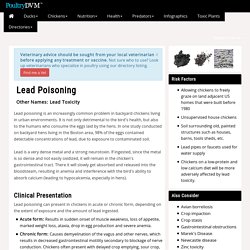 It is not only detrimental to the bird's health, but also to the humans who consume the eggs laid by the hens. In one study conducted on backyard hens living in the Boston area, 98% of the eggs contained detectable concentrations of lead, due to exposure to contaminated soil. Untitled. Randy's Chicken Blog. How to Predator Proof Your Chicken Coop. One of the hardest things in keeping chickens is keeping those chickens out of the reach of chicken predators. 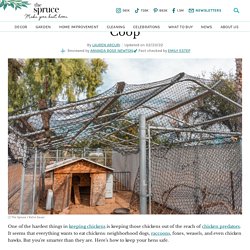 It seems that everything wants to eat chickens: neighborhood dogs, raccoons, foxes, weasels, even chicken hawks (our most-often visited predator here). But you’re smarter than they are. Here’s how to keep your hens safe. Use Hardware Cloth Wherever you would use chicken wire - window areas for ventilation, around the bottom, to make the run - use hardware cloth instead. Protect Them From Burrowing Animals Bury hardware cloth 12 inches down all around the coop to protect from rodents and other burrowing animals. Raising chickens for eggs. Quick facts Raising backyard chickens can be a rewarding experience and a great way to teach kids about nature, agriculture and responsibility of caring for animals. 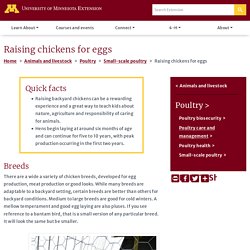 Hens begin laying at around six months of age and can continue for five to 10 years, with peak production occurring in the first two years. Breeds There are a wide a variety of chicken breeds, developed for egg production, meat production or good looks. Twin Cities Chickens Public Group. BackYard Chickens - Learn How to Raise Chickens. 20 Free DIY Chicken Coop Plans You Can Build This Weekend. Since I was little, I have always wanted to raise chickens. 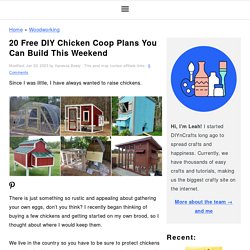 There is just something so rustic and appealing about gathering your own eggs, don’t you think? I recently began thinking of buying a few chickens and getting started on my own brood, so I thought about where I would keep them. How to Build a Chicken Coop. Building a basic chicken coop for a small flock of birds is a solid weekend project for the determined do-it-yourselfer with basic carpentry skills, while the more elaborate coops could easily take several weeks (and will require advanced carpentry skills).

The internet is awash in plans for backyard chicken coops, which are a great place to look for inspiration, but all coops have two main components: an enclosed space for sleeping and laying eggs and an open air ‘chicken run’ to roam around in during the day. The enclosed space should open directly to the run, but should be elevated at least two feet above it so there is space to collect the droppings that fall through the floor. (More on that in a moment.) 44 Beautiful DIY Chicken Coop Plans You Can Actually Build. BackYard Chickens - Learn How to Raise Chickens.

What’s the Scoop on Chicken Poop? The digestive system examined. Chicken poop; we don’t speak of it at the water cooler at work, but we do here in the chicken world because it can be one of the first signs of disease and illness. 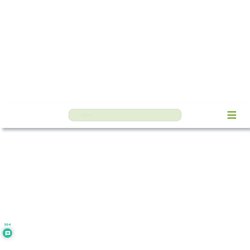 It’s not important to memorize every affliction that can cause a chicken’s droppings to be abnormal as it is to be able to recognize abnormal poop and know what to do about it. It helps to understand a little bit about the journey food takes through a chicken’s body to appreciate the end result. Food and water travels from the mouth, down the esophagus and into the crop where it is stored before moving down into the stomach (proventriculus).

Digestive enzymes are added and food then moves into the gizzard (ventriculus) which grinds up the food. Grit or small stones eaten by chickens aid in breaking down food in the gizzard before passing into the intestines. The ceca branch off the small intestine and absorb water contained in the fecal matter as it passes through. The last stop on the GI train is the cloaca. 9/14/12. Raising chickens for eggs. Why this poultry pundit has a growing flock of Facebook fans. "Atlanta to Appalachia" is an occasional series about life in the wilds of West Virginia through the eyes of a couple who never dreamed they'd love it there. 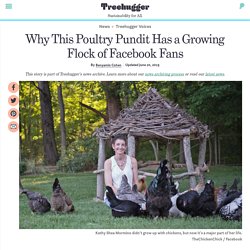 Read previous installments here. Each afternoon around 4 p.m., I wait with bated breath for a very specific Facebook notification. Its arrival is coupled with a dopamine hit to my brain, my daily fix of something I never could've imagined being obsessed with just a few months ago. But then again, there's a lot of things I never could've imaged myself doing just a few months ago — like driving a tractor to clear out yard space for a luxury chicken coop. Three months ago, I had no clue what that the TX25 Subcompact Tractor Front-End Loader even existed. But ever since my wife Elizabeth and I entered the bizarre world of raising chickens, there's not much that surprises me anymore. Welcome to the world of The Chicken Chick. 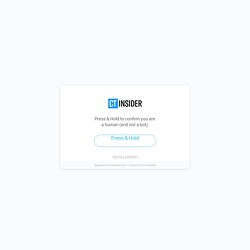 Zoning Enforcement Officer James Taylor issued the order to Mormino in June 2013 to have her comply with a town regulation that requires anyone raising poultry to have 5 acres of property, which would designate the site as a farm. Mormino is raising more than 40 chickens at the home she shares with her husband, Thomas, at 519 South Stone St., which sits on 2.17 acres. The free-range chickens, which she raises mostly for their eggs, roam her entire back yard, which is fenced in.

She also has three chicken coops. Since she has not complied with the cease-and-desist order, the town, including Taylor and the Zoning and Planning Commission, has filed a lawsuit against her and her husband in Hartford Superior Court in an effort to enforce the order. The Chicken Chick - Home. Backyard Chicken Keeping Information and Advice. Start Here - CITY GIRL FARMING.

BackYard Chickens - Learn How to Raise Chickens. Chicken Head Tracking - Smarter Every Day. 26 Sounds that Chickens Make and What they Mean - Flip Flop Ranch. Researchers have shown that there are at least 24 different sounds chickens make and maybe as many as 30. 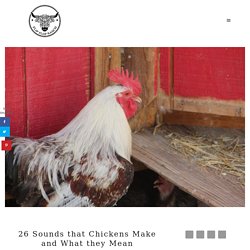 While chickens don’t have nearly the vocabulary that us humans have, and their chicken brains don’t allow for abstract and deep conversations, they are still a very vocal and conversational critter. Pins from kockamaniahu.tumblr.com on Pinterest. Cardiovascular tolerance of intravenous lidocaine in broiler chickens (Gallus gallus domesticus) anesthetized with isoflurane. 08 pain management.