Brand Builders: Rapha. There's something about cyclists - not your average trousers-in-socks-and-perhaps-a-weekend-pedal-along-the-towpath type of cyclist, but your leg-shaving, lycra-wearing, six-hours-in-the-saddle-who-cares-if-the-rain's-horizontal type - that makes them unusually obsessive. 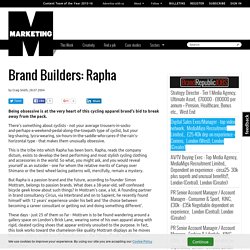 This is the tribe into which Rapha has been born. Rapha, reads the company dictum, exists to develop the best performing and most stylish cycling clothing and accessories in the world. So what, you might ask, and you would reveal yourself as an outsider - one for whom the relative merits of Campy over Shimano or the best wheel-lacing patterns will, mercifully, remain a mystery. SAPVoice: Geek Chic: Wearables for Fashionistas. For a fashionista considering the purchase of wearable tech- it comes down to two questions: “Does it match my bag?” 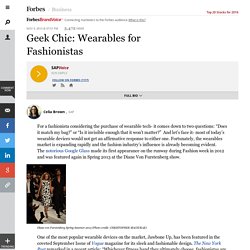 Or “Is it invisible enough that it won’t matter?” And let’s face it- most of today’s wearable devices would not get an affirmative response to either one. Fortunately, the wearables market is expanding rapidly and the fashion industry’s influence is already becoming evident. The notorious Google Glass made its first appearance on the runway during Fashion week in 2012 and was featured again in Spring 2013 at the Diane Von Furstenberg show. Diane von Furstenberg Spring Summer 2013 (Photo credit: CHRISTOPHER MACSURAK) Home. Why airport retail is taking off. Travel retail has been growing at about 12% since 2009, so it's no wonder Heathrow's Terminal 5 is chock full with luxury brands. 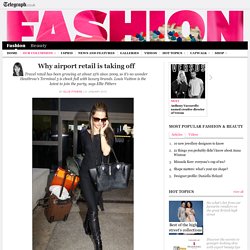 Louis Vuitton is the latest to join the party, says Ellie Pithers BY Ellie Pithers | 21 January 2015 Alessandra Ambrosio makes use of her golden hour at the airport Photo: REX The golden hour: a time of seed-planting for Tennyson and of perfect cinematic lighting for Terrence Malick. At Heathrow, however, the term has a more mercenary ring to it: this is the window between clearing security and boarding a plane, when passengers are at a loose end and most likely to spend. Airport shopping is now an important prong in a global brand's retail strategy.

Tech Innovations That Could Hit The Mainstream In 2016. Should retailers use pop-up shops? Pop-up shops are temporary outlets, which allow brands to have a presence on the high street, or to extend their existing offline presence into new areas for a short time. 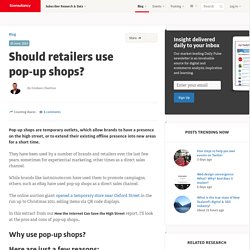 They have been used by a number of brands and retailers over the last few years, sometimes for experiential marketing, other times as a direct sales channel. While brands like lastminute.com have used them to promote campiagns, others, such as eBay, have used pop-up shops as a direct sales channel. The online auction giant opened a temporary store near Oxford Street in the run up to Christmas 2011, selling items via QR code displays.

Concept stores: what do they mean for customer experience? After the demise of HMV, many were quick to plan the future of retail. 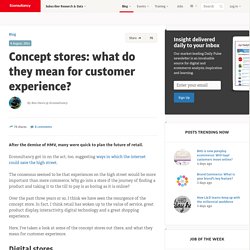 How Virtual Reality Can Help Treat Sex Offenders. The quality of virtual reality systems – immersive, computer-generated worlds – has advanced dramatically in recent years, as can be seen by the expansive editorial from journalists testing Oculus Rift headsets. 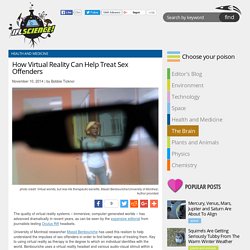 University of Montreal researcher Massil Benbouriche has used this realism to help understand the impulses of sex offenders in order to find better ways of treating them. Key to using virtual reality as therapy is the degree to which an individual identifies with the world. Benbouriche uses a virtual reality headset and various audio-visual stimuli within a “cave”, or a cube of screens, to provide an immersive experience to the participant. Sufficiently real Virtual reality treatments depend on immersion and presence. Map For Reading Faces Identified In The Human Brain. The ability to recognize faces is an important social skill, enabling us to distinguish our friends from our enemies while at the same time facilitating non-verbal communication in the form of facial expressions. 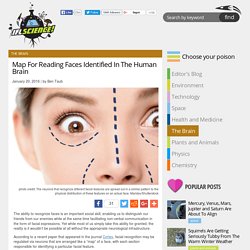 Yet while most of us simply take this ability for granted, the reality is it wouldn’t be possible at all without the appropriate neurological infrastructure. According to a recent paper that appeared in the journal Cortex, facial recognition may be regulated via neurons that are arranged like a “map” of a face, with each section responsible for identifying a particular facial feature. The researchers behind the study have labeled this phenomenon “faciotopy,” and arrived at their findings after devising an experiment to investigate whether retinotopy could be used to explain how faces are recognized by the brain. To conduct this research, the team presented volunteers with images of isolated facial features, such eyes, ears, noses, and mouths. Photo Gallery. Janet Echelman's 1.8 installation billows above Oxford Circus. Stonefox debuts faceted Identity Check mirrors. New York architecture studio Stonefox has designed a collection of sculptural, faceted mirrors that distort a viewer's likeness. 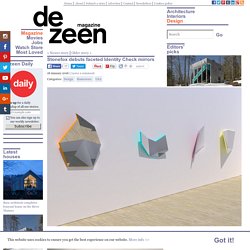 The five-piece set includes mirrors with multiple reflective surfaces edged in bright colours. Variations include models with two, three, four, six and eight facets. Stonefox introduced the designs at the FOG Design+Art event, which took in San Francisco from 14 to 17 January 2016. The name of the series, Identity Check, refers to how the objects are supposed to complicate views with multiple images. The mirrored surfaces are tilted to create distorted images, reflecting objects from different parts of the room with the intention of creating "blended identities". "Originally, it started as a design that we hoped would fracture our images as we stood next to one another – so that we became blended in the reflection," said designers Chris Stone and David Fox.

"But then we liked what was happening as we created these deep concave surfaces. The future of visual effects and immersive content. To celebrate the launch of our summer issue, Future Shock and the Barbican's Digital Revolution next month, we're devoting a day to the brave new world of digital. 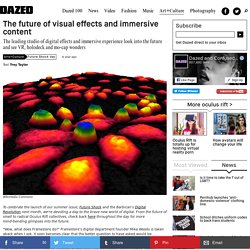 From the future of smell to radical Oculus Rift collectives, check back here throughout the day for more mind-bending glimpses into the future. "Wow, what does Framestore do? " Framestore's digital department founder Mike Woods is taken aback when I ask. It soon becomes clear that the better question to have asked would be what doesn't Framestore do?