Mantra: The Instrument to Tap the Power of Symbolic Sound, Script, and Thought. In my previous posts, I made mention of wearing Mantra pendants to counter some negative chi or energy. 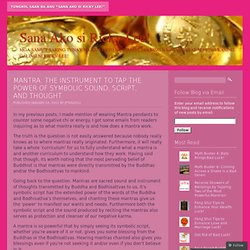 I got some emails from readers inquiring as to what mantra really is and how does a mantra work. The truth is the question is not easily answered because nobody really knows as to where mantras really originated. Furthermore, it will really take a whole ‘curriculum’ for us to fully understand what a mantra is and another curriculum to understand how they work. The Way of Universal Balance: Chanting. Many faiths use chanting in their spiritual practices. 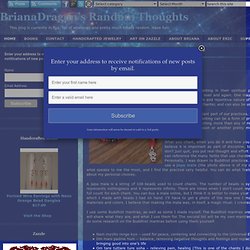 Chanting is rhythmically repeating something over and again. One may chant prayers, mantras or names of deities. Reviving an ancient mantra. Hello OV people, Although this is primarily an esoteric group, it appears there are some accomplished psychics, mystics, meditators, and explorers here! 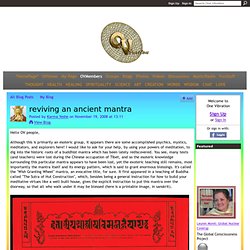 I would like to ask for your help, by using your powers of meditation, to dig into the historic roots of a buddhist mantra which has been lately rediscovered. You see, many texts (and teachers) were lost during the Chinese occupation of Tibet, and so the esoteric knowledge surrounding this particular mantra appears to have been lost, yet the exoteric teaching still remains, most importantly the mantra itself and its energy pattern, which is said to grant enormous blessings. It's called the "Wish Granting Wheel" mantra, an evocative title, for sure. The mantra transliterated to English is this: OM PADMO USHNISHA VIMALE HUM PEY Sounds like this: AUM POD MOE OOSH KNEE SHAH VIH MAH LEY HOONG PAY Loosly translated: OM flower crown bright-blessings HUM PEY.

Meditation: Seven Sages. Dragon Sun Grounding Meditations. Alan Watts - Guided Meditation (Awakening The Mind) WildDivine Meditation Community. Do Nothing for 2 Minutes. Maharishi Effect: Reducing Violent Crimes through Large Scale Group Meditations. “I think the claim can be plausibly made that the potential impact of this research exceeds that of any other ongoing social or psychological research program. It has survived a broader array of statistical tests than most research in the field of conflict resolution.

This work and the theory that informs it deserve the most serious consideration by academics and policy makers alike.” — David Edwards Ph.D., Professor of Government, University of Texas at Austin In 1960, Maharishi Mahesh Yogi predicted that one percent of a population practicing the Transcendental Meditation technique would produce measurable improvements in the quality of life for the whole population.

This phenomenon was first noticed in 1974 and reported in a paper published in 1976. Here, the finding was that when 1% of a community practiced the Transcendental Meditation (TM) program, the crime rate was reduced by 16% on average. Maharishi introduced the TM-Sidhi program, including Yogic Flying, in 1976. In the Place of No-Self (Interbeing) Purification of Mind. An ancient maxim found in the Dhammapada sums up the practice of the Buddha's teaching in three simple guidelines to training: to abstain from all evil, to cultivate good, and to purify one's mind. 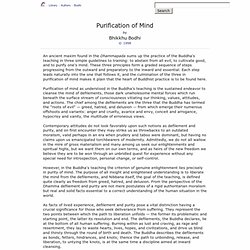 These three principles form a graded sequence of steps progressing from the outward and preparatory to the inward and essential. 7 Ways to Purify the Mind. The Mindfulness Bell. Buddha, The Word (the Eightfold Path) 500 BC BUDDHA, THE WORD (The Eightfold Path) THE FOUR NOBLE TRUTHS THUS has it been said by the Buddha, the Enlightened One: It is through not understanding, not realizing four things, that I, Disciples, as well as you, had to wander so long through this round of rebirths.

And what are these four things? Merkaba Meditation : 18 Breaths Spherical Breathing. The Torus, Spiral of Life Meditation. Vipassana ~ A Path to Self Awareness. Vipassana is the way to see things as they really are; it is one of India’s most ancient techniques of meditation that was rediscovered by Gautama Buddha more than 2500 years. 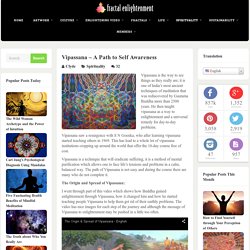 He then taught vipassana as a way to enlightenment and a universal remedy for day-to-day problems. Vipassana saw a resurgence with S N Goenka, who after learning vipassana started teaching others in 1969. This has lead to a whole lot of vipassana institutions cropping up around the world that offer the 10-day course free of cost. Vipassana is a technique that will eradicate suffering, it is a method of mental purification which allows one to face life’s tensions and problems in a calm, balanced way. Loving-kindness Meditation. Loving-kindness meditation can be brought in to support the practice of insight meditation to help keep the mind open and sweet. 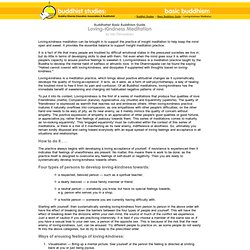 It provides the essential balance to support Insight meditation practice. It is a fact of life that many people are troubled by difficult emotional states in the pressured societies we live in, but do little in terms of developing skills to deal with them. Yet even when the mind goes sour it is within most people's capacity to arouse positive feelings to sweeten it. Loving-kindness is a meditation practice taught by the Buddha to develop the mental habit of selfless or altruistic love. In the Dhammapada can be found the saying: "Hatred cannot coexist with loving-kindness, and dissipates if supplanted with thoughts based on loving-kindness. " 30 Minute Meditation: Asking for Nothing .... And Receiving Everything. How to Access Superconsciousness - full.