Thomas Karlsson. Therion[edit] Karlsson is the lead vocalist of the symphonic death metal band Shadowseeds along with fellow Dragon Rouge member Tommie Eriksson, who also was Therion's guitarist and drummer.[3] The lyrics reflect the Order's teachings and rituals. 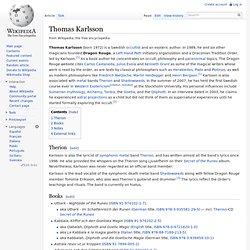 The band is currently on hiatus. Books[edit] Notes[edit] External links[edit] Gary Biltcliffe: The Power of Dragon Consciousness FULL LECTURE. Dragon Books, Tarot & Oracle Decks. Books Please remember that working with dragons and practicing dragon magick can be a very personal experience and not everyone will have the same perceptions of or experiences with dragons that are outlined in the books listed below. 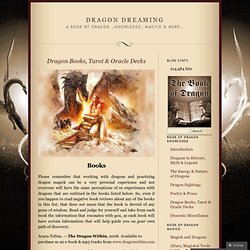 So, even if you happen to read negative book reviews about any of the books in this list, that does not mean that the book is devoid of any gems of wisdom. Read and judge for yourself and take from each book the information that resonates with you, as each book will have certain information that will help guide you on your own path of discovery. Araya-TaNaa. — The Dragon Within, 2008. Available to purchase as an e-book & mp3 tracks from www.dragonwithin.com Conway, D.J. — Dancing with Dragons: Invoke Their Ageless Wisdom & Power, 1994. Conway, D.J. — Mystical Dragon Magick: Teachings of the Five Inner Rings, 2007. Torrence, Parker J. — Sea, Land, Sky: A Dragon Magick Grimoire, 2002. sealandsky.parkertorrence.com and see inside book at “Amazon.com” Tarot Decks. Luna's Grimoire. Add to My Grimoire. 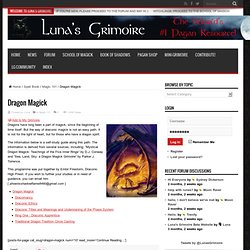 Ouroboros. Symbolic representation of coming full circle (cycle) The Ouroboros is an ancient symbol depicting a serpent or dragon eating its own tail. 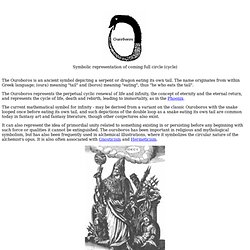 The name originates from within Greek language; (oura) meaning "tail" and (boros) meaning "eating", thus "he who eats the tail". The Ouroboros represents the perpetual cyclic renewal of life and infinity, the concept of eternity and the eternal return, and represents the cycle of life, death and rebirth, leading to immortality, as in the Phoenix. The current mathematical symbol for infinity - may be derived from a variant on the classic Ouroboros with the snake looped once before eating its own tail, and such depictions of the double loop as a snake eating its own tail are common today in fantasy art and fantasy literature, though other conjectures also exist. It can also represent the idea of primordial unity related to something existing in or persisting before any beginning with such force or qualities it cannot be extinguished.

Geometry - Creation. Conway, D.J. - Dancing With Dragons~ Invoke Their Ageless Wisdom and Power. Sea, Land, Sky: A Dragon Magick Grimoire by Parker J. Torrence. Dragon Magick. Dragon Magick is the calling upon of Dragons to aid you and become co-magicians with you. 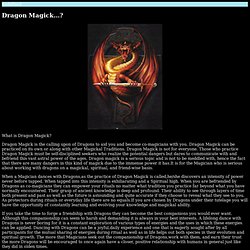 Dragon Magick can be practiced on its own or along with other Magickal Traditions. Dragon Magick is not for everyone. Those who practice Dragon Magick must be self-disciplined seekers who realize the potential dangers but dares to communicate with and befriend this vast astral power of the ages. Dragon magick is a serious topic and is not to be meddled with, hence the fact that there are many dangers in this kind of magick due to the immense power it has.It is for the Magician who is serious about working with dragons on a magickal, spiritual, and friend-wise basis.

When a Magician dances with Dragons,as the practice of Dragon Magick is called,he/she discovers an intensity of power never before tapped. If you take the time to forge a friendship with Dragons they can become the best companions you would ever want. Here's a few things that you should know about dragon magicck offhand: BackHome. Dragons, Dragonflies, Winged Serpents. Dragons and Winged Serpents ShareThis Dragons and Snakes are symbols for human DNA. 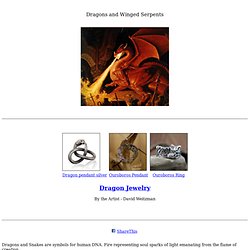 Varied Works: Draconomicon. About the author: Joshua Free is the founder of Mardukite Ministries (2008) and the prolific author of many works including Sumerian Religion, Babylonian Myth & Magic, The Sorcerer's Handbook of Merlyn Stone, The Necronomicon Anunnaki Bible, and many others.

In the 1990's he was the youngest initiate of the Order of Bards, Ovates and Druids in England until he left to independently pursue the origins of the Celtic Druids - resulting in the "Book of Elven-Faerie". Although best known for his work on Sumerians, the Anunnaki and Babylonian Tradition for the "Mardukites", his work on the Dragon Legacy and modern Pheryllt Druid tradition is also paramount. His writing has even been used to introduce the third volume from Douglas Monroe, "The Deepteachings of Merlyn" (published 2011). Authored by Joshua Free Contributions by James Thomas. Book Review From Amazon. Dragon Magick - The Study Of Draconic Magic to seek your Dragon Guide. New Forest Centre for Magical Studies. New Forest Centre for Magical Studies This is another group that has a warning about it posted on Isaac Bonewit's web site. 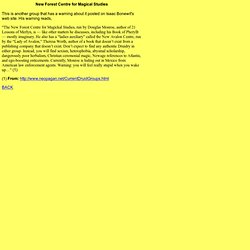 His warning reads, “The New Forest Centre for Magickal Studies, run by Douglas Monroe, author of 21 Lessons of Merlyn, is — like other matters he discusses, including his Book of Pheryllt — mostly imaginary. He also has a “ladies auxiliary” called the New Avalon Centre, run by the “Lady of Avalon,” Theresa Worth, author of a book that doesn’t exist from a publishing company that doesn’t exist.

Don’t expect to find any authentic Druidry in either group. . (1) From:

Clan of the Dragon Articles & Tables. Dragon and the Pearl, Axis Mundi, Hatshepsut's Mummy. Find the metaphors in the story below. 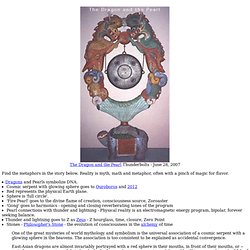 Reality is myth, math and metaphor, often with a pinch of magic for flavor. Stones - Philosopher's Stone - the evolution of consciousness in the alchemy of time One of the great mysteries of world mythology and symbolism is the universal association of a cosmic serpent with a glowing sphere in the heavens. The association is too consistent to be explained as accidental convergence.

East-Asian dragons are almost invariably portrayed with a red sphere in their mouths, in front of their mouths, or -- as in Javanese art--on top of their heads. Mystical Dragon Magick: Teachings of the Five Inner Rings D.J. Conway. Dragon Ritual Drummers.