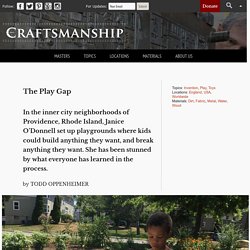 A case can be made that playgrounds like these, built mostly of discarded ''loose parts,'' are more creative, more fun, and more educational than their fancy counterparts in wealthier neighborhoods. Several years ago, Janice O’Donnell, the director of the Providence Children’s Museum, conducted a survey of public school superintendents in her community to see how much recess time was available to students. Virtually everyone who responded said they considered recess important, but only a tiny percentage of the schools actually offered it anymore. When O’Donnell started looking into why this was happening, not only in Rhode Island but elsewhere in the country, she was stunned by what she learned. Over the last 10 to 15 years, many teachers felt their students no longer had time for recess. Cuba’s madres (y padres) of invention - Craftsmanship Magazine. Topics: Agriculture, Engineering, Fashion, Invention, Machinery, Music, Shoemaking, Tools, Travel Locations: Cuba Materials: Bronze, Clothing, Soil, Tobacco, Wood Masters: Bebo: Mechanic, Chiqui: Instrument Repairman, Uncle Orestes: tobacco grower Story and photography by ROB WATERS In Cuba, even musical instrument repair shops have become centers of invention. 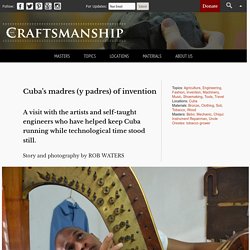 The workers in this shop made a drill press from the wheel of a Soviet truck and an old water pipe. My first encounter with what Cubans call inventos–the term they use for the hacks and gadgets they create to keep things working—comes before I have even left the Havana airport. I pass through an immigration queue staffed by agents in short skirts and fishnet stockings, head to the taxi stand, and a big, genial taxista named José Vigoa Ruiz ushers me into the front seat of his 1955 black Cadillac. Havana. Let Tinkerbell Tinker - Craftsmanship Magazine. The Rawhide Artist - Craftsmanship Magazine. By ANDY RIEBER Bill Black learned to make and use rawhide 40 years ago. 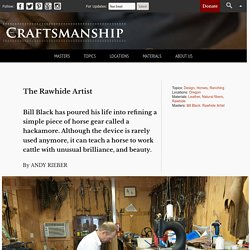 He has been refining hackamores for horse training ever since. Photo by Thomas Rollins “A small quiet drinking town with a cattle problem.” Slow Wine - Craftsmanship Magazine. By TIM TEICHGRAEBER Terraced vineyards define Tenuta Novare, Bertani’s home estate since 1957. 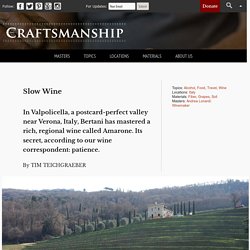 Here, in the Valpolicella valley near Verona, Italy, the Bertani family pioneered a dry style of Amarone now regarded as one of the country’s finest wines. Photo courtesy of Bertani If you place your left hand palm-down on a table in Northern Italy, with your fingers facing south, your pinkie and ring finger will point toward the city of Verona. The spaces between your fingers now represent the four steep valleys of Valpolicella, as they descend from the Dolomite mountain range.

The special drying process for Amarone wines has been a tradition here for centuries. Lake Garda is west, to the right of your thumb, moderating daytime temperatures and breathing cool air across your fingertips toward that drowning beauty that is Venice, about 80 miles to Verona’s east. The local Corvina grapes are particularly well-adapted to make the concentrated Amarone wine this region is known for. 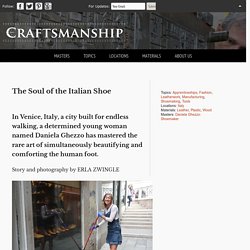 Story and photography by ERLA ZWINGLE Daniela Ghezzo--master shoemaker--doesn't mind washing the windows on her shop, the Atelier Segalin. ''Usually I think when I'm cleaning,'' she says. “Maledette scarpe!” Said Daniela Ghezzo, to the unruly materials in her hands. Shoes have captivated us for a very long time. Daniela not only understands this quandary, she seems particularly well suited to overcome it.

She came to work at the Atelier Segalin in 1995, right out of high school. Shoe fantasies, made real (Click on any photo below to enter full-screen slideshow) Daniela not only kept the name, she kept all the tools and the laborious traditional techniques, but Segalin’s flamboyant style soon disappeared. “When I started here I wanted to become the best shoemaker in the world,” she told me. The I.M. Summer Issue, 2015 - Craftsmanship Magazine. Spring issue, 2015 - Craftsmanship Magazine. Rum, Mezcal, Bonsai, shoes and more. Our next issue will be out soon! Dear Faithful Readers, With fall almost upon us, we’re pulling together our next issue, our fourth. 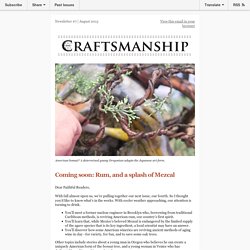 So I thought you’d like to know what’s in the works. With cooler weather approaching, our attention is turning to drink. You’ll meet a former nuclear engineer in Brooklyn who, borrowing from traditional Caribbean methods, is reviving American rum, our country’s first spirit. You’ll learn that, while Mexico’s beloved Mezcal is endangered by the limited supply of the agave species that is its key ingredient, a local scientist may have an answer. Other topics include stories about a young man in Oregon who believes he can create a uniquely American form of the bonsai tree, and a young woman in Venice who has dedicated herself to making perfect shoes. We’ll also fill you in on the reaction to a story in our last issue called “The Vegetable Detective,” which spurred extensive coverage from other media and some spirited discussions. Look for the next issue in mid-September. Lapham's Quarterly - Fall 2015. Fashion. Orion - September/October 2015. Orion - July/August 2015. Orion - May/June 2015.