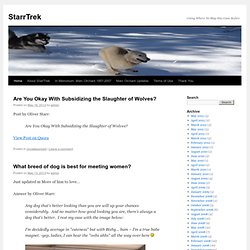 Just updated m More of him to love… Answer by Oliver Starr: Any dog that's better looking than you are will up your chances considerably. And no matter how good looking you are, there's always a dog that's better. I rest my case with the image below: I'm decidedly average in "cuteness" but with Bixby… bam – I'm a true babe magnet. View Answer on Quora Brave Moose Mother Fights Wolf Pack In Heroic, Tragic Battle To Save Calf (PHOTOS, VIDEO) and what gives humans the right to interfere in a cycle that has preceded us by millions of years? Wolves are called keystone predators for a reason.

Humans kill far more elk and moose than wolves and we take the biggest, the best, the healthiest – with every kill we destroy the strength of the species, with every kill the wolves improve it. We should stay out of the way, and your comment simply proves you know next to nothing about nature. Trappers! I've updated the post on my bounty for: Post by Oliver Starr: Timbuktu. Timbuktu (/ˌtɪmbʌkˈtuː/; French: Tombouctou [tɔ̃bukˈtu]; Koyra Chiini: Tumbutu), formerly also spelled Timbuctoo and Timbuktoo, is a city in the West African nation of Mali situated 20 km (12 mi) north of the River Niger on the southern edge of the Sahara Desert. 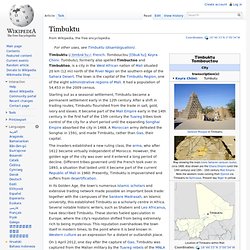 The town is the capital of the Timbuktu Region, one of the eight administrative regions of Mali. It had a population of 54,453 in the 2009 census. Starting out as a seasonal settlement, Timbuktu became a permanent settlement early in the 12th century. After a shift in trading routes, Timbuktu flourished from the trade in salt, gold, ivory and slaves. It became part of the Mali Empire early in the 14th century. The invaders established a new ruling class, the arma, who after 1612 became virtually independent of Morocco.

On 28 January 2013, French and Malian government troops began retaking Timbuktu from the Islamist rebels.[5] The force of 1,000 French troops with 200 Malian soldiers retook Timbuktu without a fight. Timbuktu. Timbuktu Home of the prestigious Koranic Sankore University and other madrasas, Timbuktu was an intellectual and spiritual capital and a centre for the propagation of Islam throughout Africa in the 15th and 16th centuries. 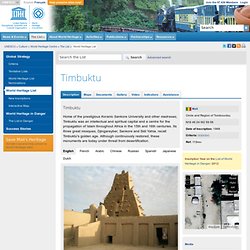 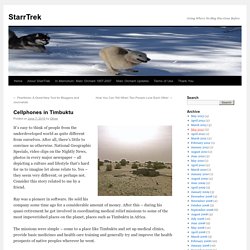 After all, there’s little to convince us otherwise. National Geographic Specials, video clips on the Nightly News, photos in every major newspaper – all depicting a culture and lifestyle that’s hard for us to imagine let alone relate to. Yes – they seem very different; or perhaps not. Consider this story related to me by a friend. Ray was a pioneer in software. The missions were simple – come to a place like Timbuktu and set up medical clinics, provide basic medicines and health care training and generally try and improve the health prospects of native peoples wherever he went. Upon arriving in Timbuktu, Ray observed that their system of commerce was incredibly simple. According to Ray they had no established currency – they traded goats for charcoal, charcoal for goats or labor in exchange for either charcoal or goats.

Principally, the change was to the commerce in Timbuktu.