Golang. Java. Scala Basic Syntax. If you have good understanding on Java, then it will be very easy for you to learn Scala. 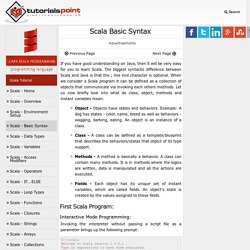 The biggest syntactic difference between Scala and Java is that the ; line end character is optional. When we consider a Scala program it can be defined as a collection of objects that communicate via invoking each others methods. Let us now briefly look into what do class, object, methods and instant variables mean. Object - Objects have states and behaviors. Example: A dog has states - color, name, breed as well as behaviors - wagging, barking, eating. First Scala Program: Interactive Mode Programming: Invoking the interpreter without passing a script file as a parameter brings up the following prompt: Pdftk. Certified Developers. After hands-on training and examination, TIBCO StreamBase CEP developers can attain Certified StreamBase Developer status. 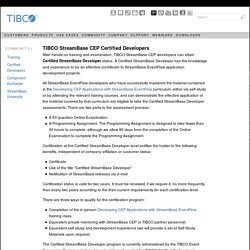 A Certified StreamBase Developer has the knowledge and experience to be an effective contributor to StreamBase EventFlow application development projects. All StreamBase EventFlow developers who have successfully mastered the material contained in the Developing CEP Applications with StreamBase EventFlow curriculum, either via self-study or by attending the relevant training courses, and can demonstrate the effective application of the material covered by that curriculum are eligible to take the Certified StreamBase Developer assessments. There are two parts to the assessment process: Using the With statement - MS-Word Tutorial. MS-Word / General Formatting The With statement is a special VBA shortcut that lets you refer to an object in several statements without having to refer to the object every time. 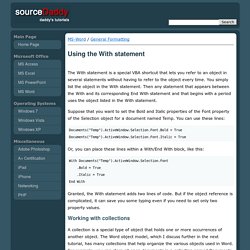 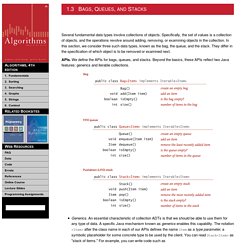 Specifically, the set of values is a collection of objects, and the operations revolve around adding, removing, or examining objects in the collection. In this section, we consider three such data types, known as the bag, the queue, and the stack. They differ in the specification of which object is to be removed or examined next. The SimJava Tutorial. Contents: 1. 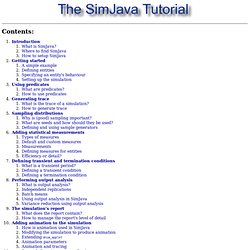 Introduction 1.1. What is SimJava? Memory - Calculate size of Object in Java. Logic.cse.unt.edu/tarau/teaching/GraphTheory/jung/OLD/jung/src/samples/graph/PersistentLayoutDemo.java. Edu.uci.ics.jung.visualization.control.EditingGraphMousePlugin. Java ILP - Java Interface to ILP Solvers. Home · Netflix/RxJava Wiki. Java.util.concurrent.Future basics. Hereby I am starting a series of articles about future concept in programming languages (also known as promises or delays) with a working title: Back to the Future. 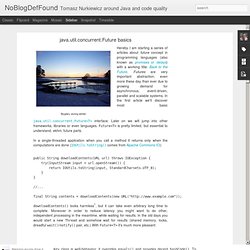 Futures are very important abstraction, even more these day than ever due to growing demand for asynchronous, event-driven, parallel and scalable systems. In the first article we'll discover most basic java.util.concurrent.Future<T> interface. Later on we will jump into other frameworks, libraries or even languages. Future<T> is pretty limited, but essential to understand, ekhm, future parts. In a single-threaded application when you call a method it returns only when the computations are done (IOUtils.toString() comes from Apache Commons IO): public String downloadContents(URL url) throws IOException { try(InputStream input = url.openStream()) { return IOUtils.toString(input, StandardCharsets.UTF_8); } } //... final String contents = downloadContents(new URL("

Odysseus Home - Odysseus - Odysseus. Odysseus Data Stream Management and Complex Event Processing: Use Cases. Due to the universal architecture of Odysseus, the system is not limited to a specific application and can be used in almost any domain. 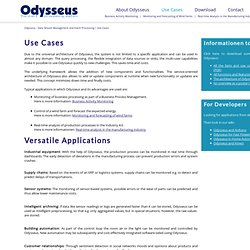 The query processing, the flexible integration of data sources or sinks, the multi-user capabilities make it possible to use Odysseus quickly to new challenges. This saves time and costs. The underlying framework allows the addition of new components and functionalities. The service-oriented architecture of Odysseus also allows to add or update components at runtime when new functionality or updates are needed. This concept minimizes down time and finally costs. Typical applications in which Odysseus and its advantages are used are: Sorting - Want to sort large csv file having date in the format ddMONYYYY using unix sort command. Event Processing in the Cloud with StreamInsight Austin: Part I-Building an Azure AppFabric Adapter. StreamInsight is Microsoft’s (complex) event processing engine which takes in data and does in-memory pattern matching with the goal of uncovering real-time insight into information. 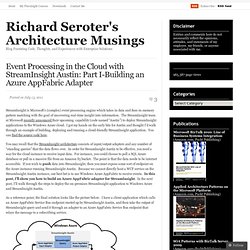 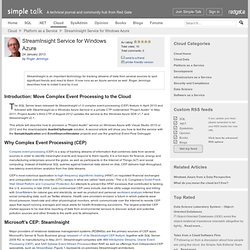 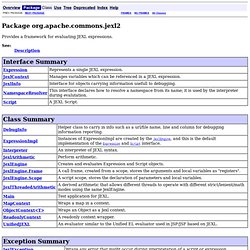 See: Description Package org.apache.commons.jexl2 Description Introduction JEXL is a library intended to facilitate the implementation of dynamic and scripting features in applications and frameworks. Thomas Dudziak's Blog. At work, we recently started using Esper for realtime analytics, and so far we quite like Esper. It is a great tool at what it does – running queries continuously over data. The problem however then becomes how to get data into Esper.

The recently released Storm could be one way to do that, so I got curios and started playing around with it to see if it could be made to work with Esper. And it turns out, the integration is straightforward. Chapter 10. JGroups Services. Why is FC needed on top of TCP ? TCP has its own flow control ! The reason is group communication, where we essentially have to send group messages at the highest speed the slowest receiver can keep up with. Let's say we have a cluster {A,B,C,D}. D is slow (maybe overloaded), the rest are fast. When A sends a group message, it uses TCP connections A-A (conceptually), A-B, A-C and A-D. Now JGroups has to buffer all messages in memory for the case when the original sender S dies and a node asks for retransmission of a message sent by S. So, in summary, even with TCP we need to FC to ensure we send messages at a rate the slowest receiver (D) can handle.