View topic - Meikar's Official Script. Now that I have an almost-canonized script for my language, I can somewhat show how it works! 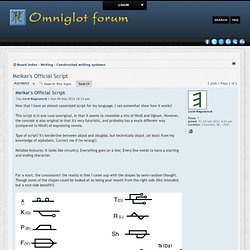 This script is in one case unoriginal, in that it seems to resemble a mix of Hindi and Ogham. However, the concept is also original in that it's very futuristic, and probably has a much different way (compared to Hindi) of expressing vowels. Type of script? It's borderline between abjad and abugida, but technically abjad. (at least from my knowledge of alphabets. Notable features: It looks like circuitry; Everything goes on a line; Every line needs to have a starting and ending character. Ampkohlasy Writing System. The image shows a table of printed glyphs. 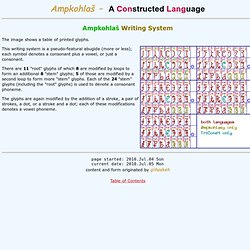 Tamil Alphabet and Writing System. Tamil Writing System Omniglot.com has an informative page about Tamil which gives an overview of the language, the alphabet and writing system in general. 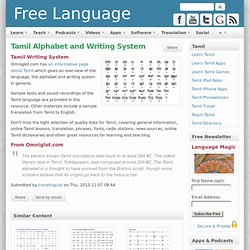 Sample texts and sound recordings of the Tamil language are provided in this resource. Other materials include a sample translation from Tamil to English. Don't miss the tight selection of quality links for Tamil, covering general information, online Tamil lessons, translation, phrases, fonts, radio stations, news sources, online Tamil dictionaries and other great resources for learning and teaching. From Omniglot.com The earliest known Tamil inscriptions date back to at least 500 BC. Nordiche - Conlang. Nordiche is the predominant language of AnortHea, the largest known nation on the Otherworld of Urdhe. 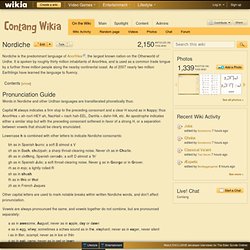 It is spoken by roughly thirty million inhabitants of AnortHea, and is used as a common trade tongue by a further three million people along the nearby continental coast. As of 2007 nearly two million Earthlings have learned the language to fluency. Words in Nordiche and other Urdhan languages are transliterated phonetically thus: Capital H always indicates a firm stop to the preceding consonant and a clear H sound as in happy; thus AnortHea = ah-nort-HEY-ah, NacHail = nach hah-EEL, DanHa = dahn-HA, etc.

An apostrophe indicates either a similar stop but with the preceding consonant softened in favor of a strong H, or a separation between vowels that should be clearly enunciated. Lowercase h is combined with other letters to indicate Nordiche consonants: bh as in Spanish burro; a soft B almost a V. Toki pona sitelen sitelen: lesson 4. In this lesson, we add direct objects to our sentences, and learn to work with compound verbs. 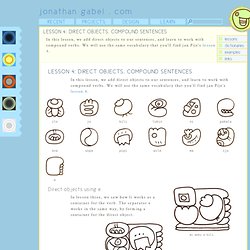 We will use the same vocabulary that you'll find jan Pije’s lesson 4. Maui alphabet. The Maui script was invented by Ian James as an alternative way of writing Pacific languages such as Maori. 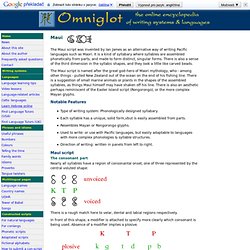 Ayeri Ornament Script. The Ornament Script was invented in April 2004 by Carsten Becker, originally intended to be used as a script for artistic purposes in his invented language, Ayeri, but later discarded for that purpose. In that language, the script is called Tahano Veno (beautiful script). Notable features The shapes of the letters were inspired by vines. Tahano (Nu)Veno(n) font. Just in case this was missed by anyone … If you’ve been following my work you may remember I used to have this Vine Script thing, which was an ornamental alphabet that took inspiration for its characters from climbing plants. 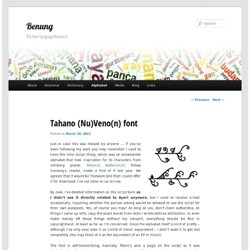 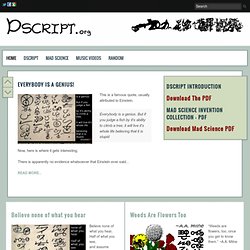 I didn't burn down the house hehe) still a fresh experiment, but first tests seem promising :) (see you-tube video above) No water or ink required, just paper, sand and fire. Could probably be done to leather, cloth, even wood, but wood would require a longer hotter burn to singe. The writing is water proof, once made, there is no ink, so it wont run or smudge no matter how wet it gets. Cover paper with sand, wipe lines in it with a stick, fingers or anything, and set a small fire on top. I think it will work much better with small burning sticks laid just above the sand .Build up the edges a bit so they don't actually lie on the "drawing surface" but instead are just above it. The last image in the video shows the carbon marks left on the floor beneath the paper. Dscript - Turning Words into Symbols and Gylphs. Golic Vulcan alphabet and language. Golic Vulcan is one of the constructed languages of the Vulcan race from the science fiction series Star Trek. 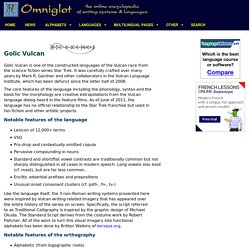 It was carefully crafted over many years by Mark R. Gardner and other collaborators in the Vulcan Language Institute, which has been defunct since the latter half of 2008. The core features of the language including the phonology, syntax and the basis for the morphology are creative extrapolations from the Vulcan language dialog heard in the feature films. As of June of 2011, the language has no official relationship to the Star Trek franchise but used in fan-fiction and other artistic projects.