Tested. EMPATHY AND THE ROBOT: A NEUROANTHROPOLOGICAL ANALYSIS - Glaskin - 2012 - Annals of Anthropological Practice. Roboticists developing socially interactive robots seek to design them in such a way that humans will readily anthropomorphize them. 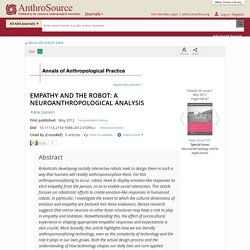 For this anthropomorphizing to occur, robots need to display emotion-like responses to elicit empathy from the person, so as to enable social interaction. This article focuses on roboticists’ efforts to create emotion-like responses in humanoid robots. In particular, I investigate the extent to which the cultural dimensions of emotion and empathy are factored into these endeavors. Recent research suggests that mirror neurons or other brain structures may have a role to play in empathy and imitation. Notwithstanding this, the effect of sociocultural experience in shaping appropriate empathic responses and expectations is also crucial. InternetAWACS. The 3 Most Lucrative Programming Skills You Can Learn Online for Free. Posted in: Careers Programming jobs are as hot as ever and there is no end in sight. 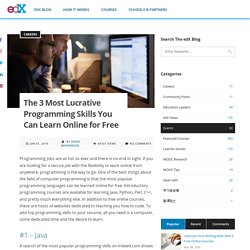 If you are looking for a secure job with the flexibility to work online from anywhere, programming is the way to go. One of the best things about the field of computer programming is that the most popular programming languages can be learned online for free. Introductory programming courses are available for learning Java, Python, Perl, C++, and pretty much everything else. Freelance Software & Programming Jobs Online – XPlace. The 9 Most In-Demand Programming Languages of 2016. Glassdoor recently published a report on the top 25 lucrative, in-demand jobs. More than half of the jobs listed are in tech and require programming skills. If you’re interested in a fast-growing and lucrative career, you might want to make learning to code next on your checklist!

The 9 Most In-Demand Programming Languages of 2016. Albariño And Alvarinho Are The Same Grape! There exists an Iberian grape variety, perhaps the only white grape from this peninsula to achieve “classic” status around the world. 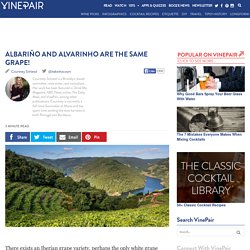 Perhaps you know it as Albariño, the lively white grape from Rías Baixas, a northwestern Spanish region that more resembles the coast of Ireland than it does the land of bull fighting and flamenco. But drive across the Miño River (or walk or swim – it’s a mere few hundred feet) and vineyards overlooking this river (known as the Minho here, of course) will have Alvarinho, the noble white grape of Portugal’s Vinho Verde region. 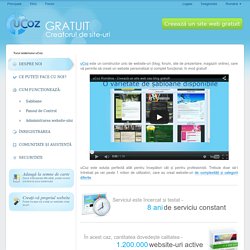 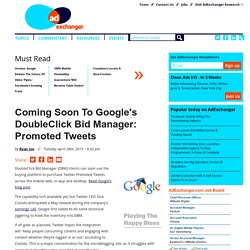 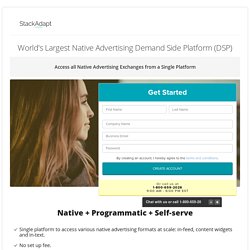 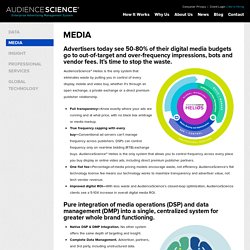 It’s time to stop the waste. AudienceScience® Helios is the only system that eliminates waste by putting you in control of every display, mobile and video buy, whether it’s through an open exchange, a private exchange or a direct premium publisher relationship. Full transparency—Know exactly where your ads are running and at what price, with no black box arbitrage or media markup.True frequency capping with every buy—Conventional ad servers can’t manage frequency across publishers.

Sony put a Bluetooth speaker in an LED light bulb. Lights and music are a time-tested combination, and now Sony finally offers them in one product. 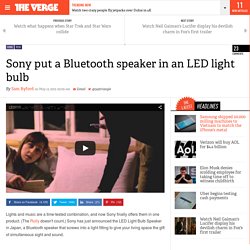 (The Rolly doesn't count.) Sony has just announced the LED Light Bulb Speaker in Japan, a Bluetooth speaker that screws into a light fitting to give your living space the gift of simultaneous sight and sound. Define It - What Is Programmatic Selling? Frank Addante, CEO, Rubicon Project "Programmatic selling is just a fancy way of talking about automation. 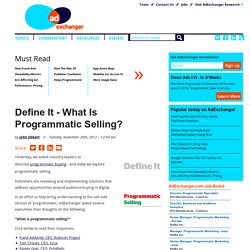 Simply put, it's taking similar selling rules that a publisher would give to their direct sales team and having computers automate and enforce them electronically. There are two types of automation: a) transactions via private and public "auctions" and b) individual "orders" between a publisher and an advertiser/agency.

The Intercept. Glogin?mobile=1&URI= #MayPac A Goldmine For HBO/Showtime, But Pirate Feeds Made Out Like Bandits. Yes, the Mayweather-Pacquiao championship fight was a huge cash cow for HBO and Showtime, bringing in a positively mind-blowing $400+ million in pay-per-view revenues last night. 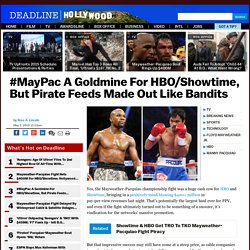 That’s potentially the largest haul ever for PPV, and even if the fight ultimately turned out to be something of a snoozer, it’s vindication for the networks’ massive promotion. But that impressive success may still have come at a steep price, as cable companies turned out to be somewhat – to put it mildly – unprepared for the massive demand. Unprecedented service problems plagued cable and satellite providers across the country, leading promoters to delay the start of the match by 45 minutes. Even when the fight finally did begin, service outages continued apace, causing a crush of complaints so massive that Comcast reportedly just stopped taking phone calls, while Time Warner, in at least one instance, informed customers of a nearly 12-hour wait time to speak to customer service.

Official Hub For Tech & NYC Startups. Press. Risks Associated with Fantex Inc.’s Business Fantex Inc.’s ability to implement its business strategy is subject to numerous risks and uncertainties. Fantex faces many risks inherent in its business generally. You should carefully consider all of the information set forth in this prospectus and, in particular, the information under the heading ‘‘Risk Factors,’’ prior to making an investment in Fantex stocks. These risks include, among others, the following: Risks Relating to Fantex Limited Operating History, Financial Position and Capital Needs. State of the Agency Market: What You Need to Know. Ad-agency employment has reached its highest level since 2001, agency stocks this month scored all-time highs and U.S. ad spending this year is finally in position to pass its prerecession peak.

It's a good time to be in the agency game -- at least if you're connected to digital. U.S. agency revenue rose 5.4% to a record $43.6 billion in 2014. Growth was driven by digital work, which captured nearly 40% of U.S. agency revenue in 2014. NYSE Euronext Hires Digitas to Handle Its Advertising Account. Jay Z Defends Tidal: 'We Are Here for the Long Haul' "Stream of consciousness coming in 5, 4, 3, 2…," Jay Z's rarely used Twitter warned before the rapper unloaded a 15-minute, 14-tweet defense of his oft-criticized Tidal, the high-quality audio streaming service the rapper recently acquired and relaunched.

Amid the recent departure of the company's CEO, a significant drop in Tidal app downloads and disapproval from some of his artist peers, Jay Z tweeted, "Tidal is doing just fine. We have over 770,000 [subscriptions]. We have been in business less than one month. " After a surge in popularity following the service's star-studded launch party in late March, Tidal has reportedly already spiraled out of the Apple app store's top 750 downloads. Despite the drop, Jay Z remains optimistic about the service. Because of the high-profile status of the artists Jay Z invited to join him in the Tidal venture – Kanye West, Rihanna, Madonna, Jack White, etc. – the service was viewed as a way for the wealthy artists to get even wealthier. Glogin?mobile=1&URI= Here's how you can see and delete your entire Google search history.

A computer user poses in front of a Google search page in this photo illustration taken in Brussels May 30, 2014. Google now allows you to download an archived list of everything you have ever searched for. About. Four International News Publishers Team Up for Programmatic Offering - LookBook: Advertising Agency Directory - Advertising Age - LookBook. About Lookbook LookBook is the first directory of its kind designed to provide a platform for companies to showcase their robust offerings while incorporating featured content as covered in Advertising Age and Creativity.

This resource is a tool that allows our audience to discover new solutions and partners. Learn More About LookBook. Digital Media Trading Glossary™ - MediaCrossing Inc - Bridging the Market for Digital Media Publishers, Marketers and Agencies. 1st Party DataInformation compiled about visitors’ relationships with a particular site, which can be shared explicitly (i.e., signing up for an email list, filling out a form or survey, etc.) or implicitly (i.e., information about past web surfing habits, site visits, etc.). 2nd Party DataProvided by advertisers or digital media companies, 2nd party data refers to the information previously aggregated (either by permission or anonymously) from both online and offline sources.

This data is then segmented into targetable audience groups based on certain characteristics. 3rd Party DataHighly descriptive data that can be collected by an outside vendor to create broad sets of segments. Ultimately, 1st party data can be enriched by 2nd party data from advertisers, which in turn can be even more enriched by data aggregators or data management platforms. Activation Activation Is the execution of the marketing mix as part of the marketing process. Digital Media Trading Glossary™ - MediaCrossing Inc - Bridging the Market for Digital Media Publishers, Marketers and Agencies. Google Using NFL Content as Leverage to Bolster YouTube Ad Sales - CMO Today. What Does the Future Hold for ATDs?

Marketers Avoid Agency Trading Desks In Search Of Transparency - CMO Today. Real-Time With Keith Gooberman On Launching An Independent Trading Desk 02/17/2015. Size Doesn't Matter: Sony Music Partners With 'Boutique' Trading Desk 05/23/2013. Pulling Back The Curtain On In-House: Let's Do The Math 03/17/2015. Assessing programmatic financials has never been more important. Programmatic is quickly pushing marketers into marketing technologists, and permanently turning Mad Men and Women into Math Men and Women. Who Will Dominate The Future Programmatic Landscape? Trading desks: Are independents the answer to client concerns? Digital trading is a hot topic. The Trouble With Trading Desks. Over the past few years, digital media agencies have embraced buying ad inventory in a manner akin to how Wall Street traders purchase stocks.

The Emerging Role Of The Independent Media Trader 04/22/2014. The Publishers Guide to Programmatic Media Buying and Selling. Programmatic Advertising 101 - Definitions You Need to Know - Shelly Palmer - Shelly Palmer - Shelly Palmer Report. Jay Z Talks Tidal and Competing With Jimmy Iovine. How to see if my emails are being tracked in Gmail - Business Insider. Social Media Management. CreateSpace: Self Publishing and Free Distribution for Books, CD, DVD. The right type of art, architecture and design can actually save the world!

Branding on a Budget: How to Write a Great Creative Brief. Schedule a FREE Consultation. CreateSpace: Self Publishing and Free Distribution for Books, CD, DVD. HOW TO: Self Publish Your Book with Amazon's CreateSpace. Writing a children's cartoon. How to Host your Website on Google App Engine for Free. Top 40 Useful Sites To Learn New Skills. The Best Places to Host Your Email With Your Own Domain. Xone - Clean One Page Template. 50+ Best One Page Website Templates Free & Premium.