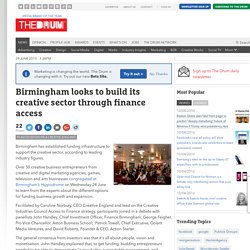 The general consensus from investors was that it's all about people, vision and monetisation. Bugatti Hopes Handbags Will Turbocharge Brand. The History and Future of Fashion Prediction: conference report » The Enterprise of Culture. January 24, 2015 Fiona Blair1 On the 17 October, fashion scholars, industry professionals, curators, archivists, students and fashion lovers gathered in the Erasmus University Rotterdam to explore the evolution of fashion prediction worldwide since the interwar period. 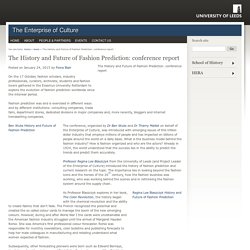 Fashion prediction was and is exercised in different ways and by different institutions: consulting companies, trade fairs, department stores, dedicated divisions in major companies and, more recently, bloggers and internet trendsetting companies. 2The conference, organized by Dr Ben Wubs3 and Dr Thierry Maillet4 on behalf of the Enterprise of Culture, was introduced with emerging issues of this trillion dollar industry that employs millions of people and has impacted on billions of people around the world on a daily basis.

Period Panties For Modern Women. Luxury car makers turn focus to women drivers. Women are buying more than half of the new cars in the United States and influence up to 80 per cent of all car purchases, according to Women-Drivers.com and Forbes. 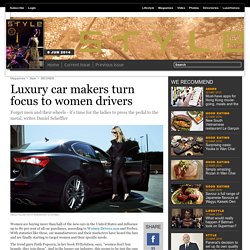 With statistics like these, car manufacturers and their marketers have heard the lure and are finally starting to target women and their specific needs. The trend guru Faith Popcorn, in her book EVEolution, says, "women don't buy brands, they join them". And in the luxury car industry, this seems to be just the case - it looks like women are changing and pervading the field from the inside out and the outside in. Italian marque Lamborghini reports that "three out of four workers in their trim and colour assembly area on the Sant'Agata Bolognese production line are now women". 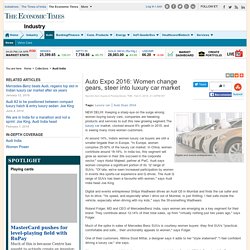 At around 14%, India's women luxury car buyers are still a smaller brigade than in Europe. "In Europe, women comprise 25-30% of the luxury car market. In China, women contribute around 18-19%. Why car makers need to pay more attention to women. Men of Britain, you know how it is. 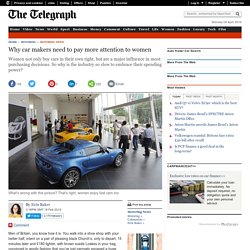 You walk into a shoe shop with your better half, intent on a pair of pleasing black Church’s, only to depart, 15 minutes later and £180 lighter, with brown suede Loakes in your bag, convinced in woolly fashion that you’ve just narrowly escaped a huge fashion disaster. This retail experience, puzzling to the casual observer, is easily explained: women, although they may not part with the money, are nearly always the major influence in any purchasing decision. The fact that this is news to crow about shows what a depressing male bastion of shiny suits the dealership network still is. All-Female Beer Festivals : Ladies Craft Beer Festival. The Society of Beer Drinking Ladies is set to host Canada's first Ladies Craft Beer Festival this coming weekend. 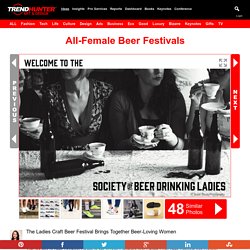 With the rise of home brewing, many women have become passionate about making and drinking craft beer. This event gives women a place to come together to sample new and innovative beers in a female-friendly environment. The Ladies Craft Beer Festival takes place on Friday, April 1st at Toronto's Evergreen Brick Works. Eva Longoria & Laetitia Casta talk about the Cointreau Creative Crew. Amsterdam in Motion. 50 Of The Best Email Marketing Designs We've Ever Seen (And How You Can Create One Just As Good) In case you hadn’t heard, email marketing isn’t dead. 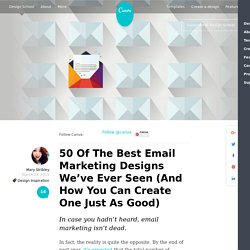 In fact, the reality is quite the opposite. By the end of next year, it’s expected that the total number of worldwide email accounts will increase to over 4.3 billion. Like it or not, we live in a time where people like to email. It’s fast, convenient and most important – effective. As a business tool, McKinsey & Company found emails to be 40 times more successful at acquiring new clients than either Facebook and Twitter – just one of the many interesting statistics to support the success of email marketing. If you’re a startup or brand wanting to leverage this success, a well-designed email is crucial to break through the pack. Engage your customers and create email marketing campaigns to reach a massive audience. U&B grocery store by PplusP Designers, Hong Kong. The concept of this project is to transform a local grocery brand – U&B, into a highly flexible and hybrid space with mono material and colour to achieve customers’ attention. 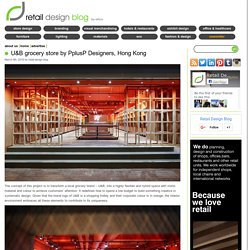 It redefines how to spend a low budget to build something creative in systematic design. Given that the brand logo of U&B is a shopping trolley and their corporate colour is in orange, the interior environment embraces all these elements to contribute to its uniqueness. Instead of the traditional roof painted in white, the tangerine ceiling stays bare to match with the concrete flooring in order to generate an unprocessed surrounding. The EM District World’s Pop-up Beach, Bangkok – Thailand. When traveling to Southeast Asia, Bangkok usually serves as the usual gateway to a slew of the region’s sun-drenched beaches. 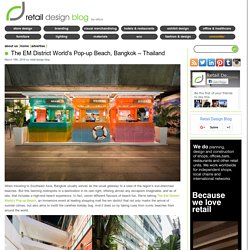 But this teeming metropolis is a destination in its own right, offering almost any escapism imaginable, and as of late, that includes a high-end beach experience. Cointreau Bar on Behance. Cointreau Limited Edition Pack on Behance. Mesh Temporary Bar / fala atelier. Architects Location Project Year 2014 Photographs Client aefaup Budget 500€ From the architect. 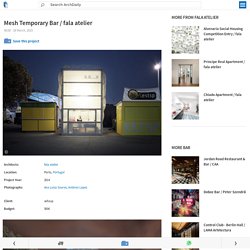 The 3x3x5m metal structure was given; the skin is defined by an overlay of metal meshes and plastic screens. Light and color flow freely through the translucent materials, becoming a smooth cloud over the imposing geometry of the structure. The Trendmakers: Behind the Scenes of the Global Fashion Industry - Jenny Lantz. Numerous tastemakers exist in and between fashion production and consumption, from designers and stylists to trend forecasters, buyers, and journalists. How and why are each of these players bound up in the creation and dispersion of trends? In what ways are consumers' relations to trends constructed by these individuals and organizations? Lidewij edelkoort. Grimm & Co. Titled. The number of international migrants — persons living in a country other than where they were born — reached 244 million in 2015 for the world as a whole, a 41 per cent increase compared to 2000, according to new data presented by the United Nations today.

This figure includes almost 20 million refugees. In November, UN Secretary-General Ban Ki-moon announced a roadmap to address the issues on migrants and refugees. In response, the General Assembly decided to convene a high-level meeting on large movements of migrants and refugees on 19 September 2016. The Secretary-General has now appointed a Special Adviser to prepare the high-level meeting, Ms. Herzog & de Meuron restores room designed by Louis C Tiffany. Swiss studio Herzog & de Meuron has completed the restoration of a 19th-century room at the Park Avenue Armory, a cultural building in Manhattan with interiors by Louis C Tiffany (+ slideshow). Called the Veterans Room, the refurbished space will host small-scale events, including recitals and lectures.

It opens to the public this week and marks the latest in a series of restorations at the Armory building overseen by Herzog & de Meuron, which is better known for big, contemporary projects like the "bird's nest" National Stadium in Beijing. Among the additions introduced by Herzog & de Meuron to complement the restoration are new wallpaper, light fittings and seating. Described as a "monument of late 19th-century decorative arts," the Veterans Room is one of the few surviving interior spaces in the world created by Louis C Tiffany and Co and Associated Artists.

Other projects that were executed by the group include the Mark Twain House and five rooms within the White House. Muslim fashion bloggers hacked, Donald Trump videos appear. EU prepares to scale back resettlement of Syrian refugees. Bookstores record first rise in sales since 2007 - Feb. 12, 2016. Data from the U.S. Census Bureau shows that bookstore sales rose by 2.5% from $10.89 billion to $11.17 billion in 2015, the first such increase in the industry since 2007. The figures were reported by Publishers Weekly, which also noted that eBook sales declined in 2015 while print sales went up.

Kalen Hollomon (@kalen_hollomon) The artists who have your back when the art world doesn’t. Art fairs and music festivals can arguably seem like sterile occasions. Giving street style paps a taste of their own medicine. Since the rise of the fashion blog in the early 2010s, street style photographers have been a mainstay at fashion week. Cartoonist and illustrator. Police allegedly trying to control music in London club. How does it feel if you’re unable to fit in? Anonymous declares war on Donald Trump. Anonymous has declared war on presidential hopeful Donald Trump, according to a video posted on YouTube. Project view / Bompas & Parr.

Barack Obama toasts Cape Breton for welcoming Americans wishing to flee Donald Trump. Review: Kendrick Lamar's 'untitled unmastered' Starkly Challenges Himself and Capitalism. Prada responds to war and migration at AW16 show. SelgasCano creates concept bookstore in East London. Can Bogotá's state-sanctioned street art survive a crackdown by the new mayor? Review: Kendrick Lamar's "Untitled Unmastered" Moschino’s cigarette iPhone case: silly but totally on brand. Am I rootless, or am I free? ‘Third culture kids’ like me make it up as we go along. Redrawing history: the feminist cartoonist putting women back in the picture.

The 2011 riots taught us nothing: when will the young and dispossessed kick off again? Brewdog gives free shares to Donald Trump. Where have the drinks ‘storytellers’ gone? Plinth Pop-Up London in collaboration with Ikon Gallery. Taylor and Miller Architecture and Design. The Vienna hotel where refugees welcome the guests. Pop Up Shop Space to Rent. These Walls Will Listen.