Social Conformity in The Crucible 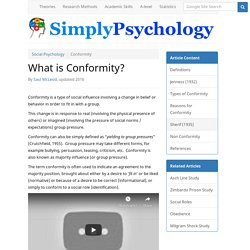 By Saul McLeod, updated 2016 Conformity is a type of social influence involving a change in belief or behavior in order to fit in with a group. This change is in response to real (involving the physical presence of others) or imagined (involving the pressure of social norms / expectations) group pressure. Conformity can also be simply defined as “yielding to group pressures” (Crutchfield, 1955). Group pressure may take different forms, for example bullying, persuasion, teasing, criticism, etc. INVISIBLE INFLUENCE: The Hidden Forces that Shape Behavior. Nontraditional Conformity. The Social Impact Theory. Social Impact Theory Definition Social impact theory proposes that the amount of influence a person experiences in group settings depends on (a) strength (power or social status) of the group, (b) immediacy (physical or psychological distance) of the group, and (c) the number of people in the group exerting the social influence (i.e., number of sources). 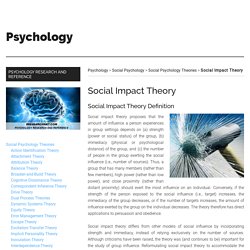 Thus, a group that has many members (rather than few members), high power (rather than low power), and close proximity (rather than distant proximity) should exert the most influence on an individual. Conformity Starts Young. Nobody likes a show-off. 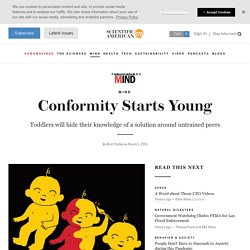 So someone with a singular skill will often hide that fact to fit in with a group. A recent study reported for the first time that this behavior begins as early as two years old. Dangers of Going Against Leaders Ideas. The Necessity of Conformity. Conformity — The Good, The Bad, and The Ugly (Click to Read) In today’s world, we, as people, accept the rules set up by society. 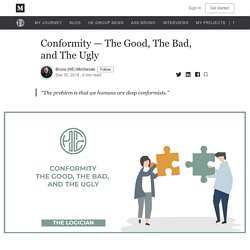 Of course, these ‘rules’ might differ depending on where you live, but still, there are some things that pretty much apply to everyone. We all follow similar patterns when it comes to our daily life, our work, and overall our existence. A lot of people can relate to a 9–5 job, having the same routines every day, yearly vacations, buying a car, a home, paying taxes. It’s all within the norms of society, and it’s safe to say that we all do these things. Some less, others more. As such, we conform to the norms, whether it is by matching our attitudes and behaviors or balancing our beliefs with others around us, and the people in our community. It’s the way the world works. We adopt these norms without thinking about them all that much. But is this a bad thing? Like many things in life, this question does not have a single answer. Let’s take a look. How Conformity Can Hurt Society. Henri Tajfel had a personal interest in studying genocide. 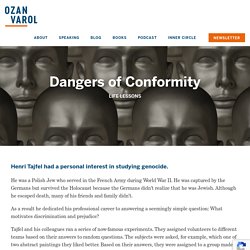 He was a Polish Jew who served in the French Army during World War II. He was captured by the Germans but survived the Holocaust because the Germans didn’t realize that he was Jewish. Although he escaped death, many of his friends and family didn’t. As a result he dedicated his professional career to answering a seemingly simple question: What motivates discrimination and prejudice? Tajfel and his colleagues ran a series of now-famous experiments. These were relatively meaningless, artificially created groups. Yet the subjects developed group loyalty frighteningly quickly. In other words, it took the most trivial of distinctions for the subjects to divide themselves between “us” and “them.” People have a natural tendency to categorize themselves and others into groups. Conformity is a natural and efficient instinct. Conformity may be a harmless process when it comes to learning to walk and talk.

The evidence suggests otherwise. The Asch Experiment- Why We Conform. How Does Conformity Influence Behavior? Conformity involves changing your behaviors in order to "fit in" or "go along" with the people around you. 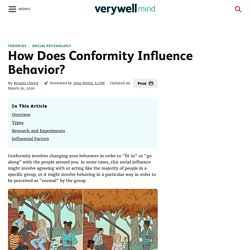 In some cases, this social influence might involve agreeing with or acting like the majority of people in a specific group, or it might involve behaving in a particular way in order to be perceived as "normal" by the group. Definitions Psychologists have proposed a variety of definitions to encompass the social influence that conformity exerts. Essentially, conformity involves giving in to group pressure. Some other definitions include: "Conformity is the most general concept and refers to any change in behavior caused by another person or group; the individual acted in some way because of influence from others.

Why Do We Conform? Researchers have found that people conform to a number of different reasons.3 In many cases, looking to the rest of the group for clues for how we should behave can actually be helpful. Types Research and Experiments Influential Factors Important factors include: The Different Factors Which Influence Us. How Fear of Punishment Leads to Conformity. The threat of punishment and humans’ seemingly innate tendency to copy other behaviors form the basis of a psychological model that explains how traditions or entrenched ideals are formed and maintained in society. 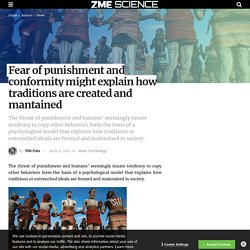 Animal behaviorists have extensively studied social learning and how it relates to danger. For instance, when there’s a threat a flock of birds will quickly react and fly away after one member signals the presence of a predator. Yet, this kind of social learning dimension has been given little thought in human-centered research.

Swedish researchers conducted 4 experiments which included 120 participants, showing that humans, if threatened with punishment, are exceptionally prone to copy and transmit the behavior observed in others.