The U.S. government should be making better use of the internet of things. What is IoT? The Internet of Things, at its simplest level, is smart devices - from refrigerators that warn you when you’re out of milk to industrial sensors – that are connected to the Internet so they can share data, but IoT is far from a simple challenge for IT departments. 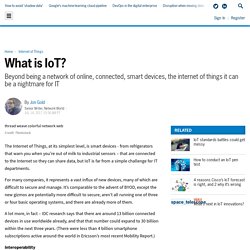 For many companies, it represents a vast influx of new devices, many of which are difficult to secure and manage. It’s comparable to the advent of BYOD, except the new gizmos are potentially more difficult to secure, aren’t all running one of three or four basic operating systems, and there are already more of them. A lot more, in fact – IDC research says that there are around 13 billion connected devices in use worldwide already, and that that number could expand to 30 billion within the next three years. Trustwave Internet of Things Security. The AI revolution is coming fast. But without a revolution in trust, it will fail.

The past 30 years have seen incredible growth and innovation in the tech industry. 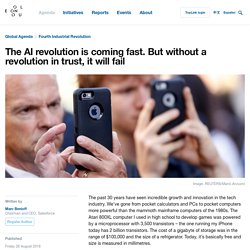 We’ve gone from pocket calculators and PCs to pocket computers more powerful than the mammoth mainframe computers of the 1980s. The Atari 800XL computer I used in high school to develop games was powered by a microprocessor with 3,500 transistors – the one running my iPhone today has 2 billion transistors. The cost of a gigabyte of storage was in the range of $100,000 and the size of a refrigerator. Today, it’s basically free and size is measured in millimetres. Data management in sensor networks using semantic web technologies. A. 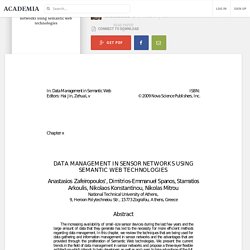 Zafeiropoulos, D.E. Spanos, S. Arkoulis et al.100the power consumed for taking a sample or performing a trivial aggregationoperation [3]). the Sensor Unit. A Great Week for the Internet of Things. In the first week of December 2015 we concluded another successful Internet of Things World Forum (IoTWF). 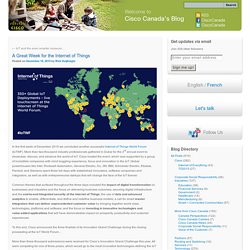 More than two-thousand industry professionals gathered in Dubai for the 3rd annual event to showcase, discuss, and advance the world of IoT. Cisco hosted the event, which was supported by a group of incredible companies with mind boggling experience, focus and innovation in the IoT. A Great Week for the Internet of Things. Let’s make smart cities cyber-safe. The Internet of Things Changes the Company-Customer Relationship. With the rise of the internet of things, our individual technology envelopes – our personal networks of smart, connected devices — are rapidly becoming more complicated as more and more devices from a growing profusion of vendors do ever more complex jobs. 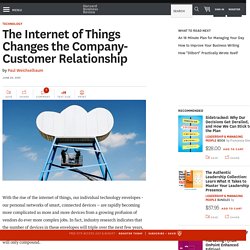 In fact, industry research indicates that the number of devices in these envelopes will triple over the next few years, and, absent a common set of standards, the complexity of these envelopes will only compound. This dynamic is exacerbated by product companies’ historical service paradigm. Empower consumers to control their privacy in the Internet of Everything. As an Eisenhower Fellow, Dr. 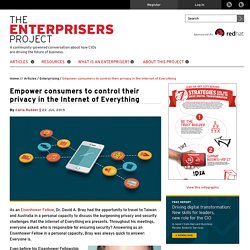 David A. Bray had the opportunity to travel to Taiwan and Australia in a personal capacity to discuss the burgeoning privacy and security challenges that the Internet of Everything era presents. Throughout his meetings, everyone asked: who is responsible for ensuring security? Answering as an Eisenhower Fellow in a personal capacity, Bray was always quick to answer: Everyone is.

The role of CIO in the Internet of Everything – Chief Strategy Officer? In Part 1 of The Enterprisers Project interview with Dr. 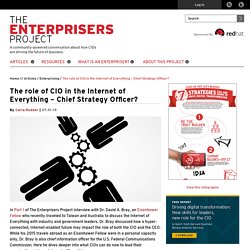 David A. Bray, an Eisenhower Fellow who recently traveled to Taiwan and Australia to discuss the Internet of Everything with industry and government leaders, Dr. Bray discussed how a hyper-connected, Internet-enabled future may impact the role of both the CIO and the CEO. Are You Ready for the Internet of Things? By Chris Carroll The “Internet of Things” can be loosely defined as the move from isolated devices to Internet-enabled platforms that can communicate with each other and the cloud. 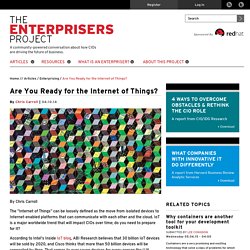 IoT is a major worldwide trend that will impact CIOs over time; do you need to prepare for it? According to Intel’s Inside IoT blog, ABI Research believes that 30 billion IoT devices will be sold by 2020, and Cisco thinks that more than 50 billion devices will be connected by then.