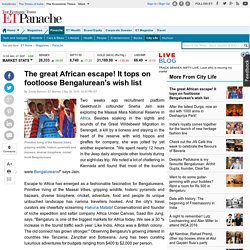 Besides soaking in the sights and sounds of the Great Wildebeest Migration in Serengeti, a kill by a lioness and staying in the heart of the reserve with wild hippos and giraffes for company, she was jolted by yet another experience. "We spent nearly 12 hours in the Jeep daily alongside other tourists during our eight-day trip. We noted a lot of chattering in Kannada and found that most of the tourists were Bengalureans! " says Jain. Escape to Africa has emerged as a fashionable fascination for Bengalureans. Seema Jaising, proprietor of Che Experiences & Travels, adds, " Africa is on everyone's bucket list since two years. Like Jung and Jaising, other experi ential travel curators too are leaving no stone unturned. "We have seen a 20% and a 60% drop in enquiries for Europe and Turkey respectively due to rising crime last year. Où passer des vacances «vertes» en Afrique? Si je vous dis «Afrique», vous me répondrez certainement «aventure, danger», peut-être même «romantisme». 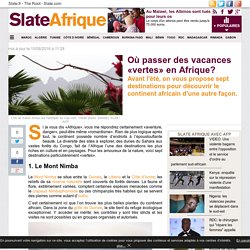 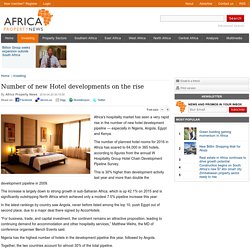 The number of planned hotel rooms for 2016 in Africa has soared to 64,000 in 365 hotels, according to figures from the annual W Hospitality Group Hotel Chain Development Pipeline Survey. This is 30% higher than development activity last year and more than double the development pipeline in 2009. The increase is largely down to strong growth in sub-Saharan Africa, which is up 42.1% on 2015 and is significantly outstripping North Africa which achieved only a modest 7.5% pipeline increase this year.

In the latest rankings by country saw Angola, never before listed among the top 10, push Egypt out of second place, due to a major deal there signed by AccorHotels. Economic factors that influence tourism in Africa. By Josephine Wawira, Consultant at Jovago Africa According to ADB's Africa Tourism Monitor 2015, global tourism has continued to grow prodigiously to 1.133 billion arrivals in 2014 – a 4.3% increase over 2013. 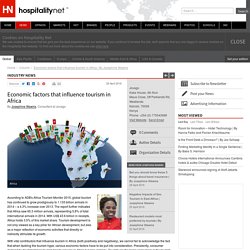 The report further indicates that Africa saw 65.3 million arrivals, representing 5.8% of total international arrivals in 2014. With US$ 43.6 billion in receipts, Africa holds 3.5% of this market share. Tourism development is not only viewed as a key pillar for African development, but also as a major reflection of economic activities that directly or indirectly stimulate its growth.

With vital contributors that influence tourism in Africa (both positively and negatively), we cannot fail to acknowledge the fact that when tackling the tourism hype; various economic factors have to be put into consideration. According to the World Travel and Tourism Council (WTTC), the international tourism sector accounted for 8.1% of Africa's total GDP in 2014.

Number of new hotel developments across Africa surges. THE Africa Rising narrative is holding strong in the continent’s hospitality sector, particularly in Nigeria and Angola, despite the contraction in these economies due to the lower oil price. 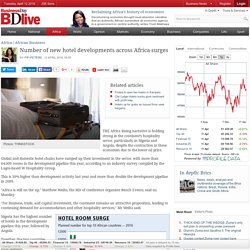 Global and domestic hotel chains have ramped up their investment in the sector, with more than 64,000 rooms in the development pipeline this year, according to an industry survey compiled by the Lagos-based W Hospitality Group. This is 30% higher than development activity last year and more than double the development pipeline in 2009. "Africa is still on the up," Matthew Weihs, the MD of conference organiser Bench Events, said on Monday. "For business, trade, and capital investment, the continent remains an attractive proposition, leading to continuing demand for accommodation and other hospitality services," Mr Weihs said. Africa: Why Millions Chose Africa As Their Safari Destination. AnalysisBy Marco Scholtz, North-West University More than 30 million tourists visit Africa every year. 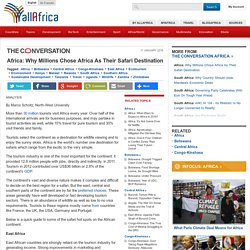 Over half of the international arrivals are for business purposes, and may partake in tourist activities as well, while 15% travel for pure tourism and 30% visit friends and family. Tourists select the continent as a destination for wildlife viewing and to enjoy the sunny skies. Africa is the world's number one destination for safaris which range from the exotic to the very simple. African Hospitality Academy debuts. PROSPECTS of career opportunities in the hotel and hospitality industry in Nigeria and other African countries have received a tremendous boost with the debut of the African Hospitality Academy in Lagos. 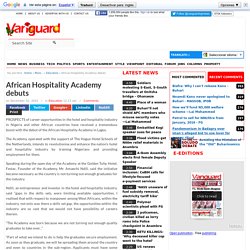 The Academy, operated with the support of The Hague Hotel Schools of the Netherlands, intends to revolutionise and enhance the nation’s hotel and hospitality industry by training Nigerians and providing employment for them. Speaking during the open day of the Academy at the Golden Tulip Hotel, Festac, Founder of the Academy, Mr. Revealed – The top ten hotel investment opportunities in Africa – The Financial Express. In the African Hotel Report 2015, released recently at the African Hotel Investment Forum in Addis Ababa, Hotel Partners Africa identified the top ten opportunities for investors keen to development hotels in Africa In West Africa, Nigeria presents the biggest opportunity, with the strongest economy on the continent matched with only 34 branded hotel bedrooms per million, population. 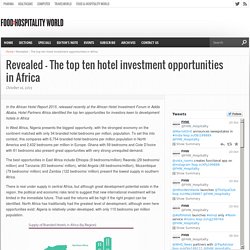