Firms plan Lagos-Ghana, others ferry services – NIWA. The National Inland Waterways Authority on Friday said some local and foreign investors had indicated interest to operate ferries within Lagos as well as from Lagos to Tema in Ghana. 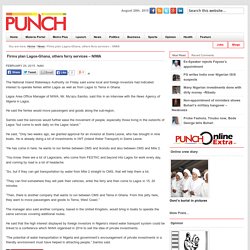 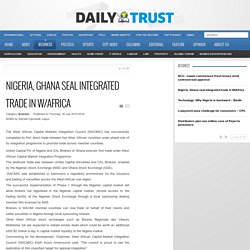 United Capital Plc of Nigeria and CAL Brokers of Ghana execute first trade under West African Capital Market Integration Programme.The landmark trade was between United Capital Securities and CAL Brokers, enabled by the Nigerian Stock Exchange (NSE) and Ghana Stock Exchange (GSE). WACMIC was established to harmonize a regulatory environment for the issuance and trading of securities across the West-African sub region. The successful implementation of Phase 1 through the Nigerian capital market will allow brokers not registered in the Nigerian capital market, remote access to the trading facility of the Nigerian Stock Exchange through a local sponsoring dealing member firm licensed by NSE. 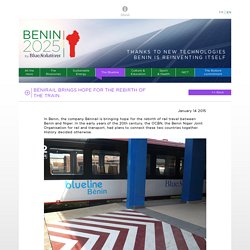 In the early years of the 20th century, the OCBN, the Benin Niger Joint Organisation for rail and transport, had plans to connect these two countries together. History decided otherwise. West Africa: Huge Opportunities for Agricultural Growth in West Africa. Press release. 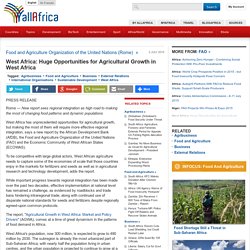 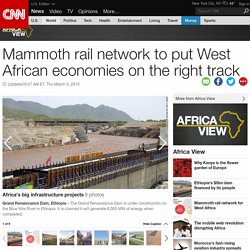 From education and energy to technology and innovation, it showcases topics and influential sectors driving countries on the continent. Mineral exports are a major economic driver of nations such as Nigeria, Burkina Faso and Niger, and are predicted to rise from 109,000 tonnes a year to 3.4 million tonnes a year by 2030. This dizzying development needs infrastructure to match, with reliable transport which can shift commodities from the sites where they are unearthed, to major ports from where they could be exported.

Railways, considered one of the most cost-effective ways of transporting goods for long distances over land, are sparse in West Africa, with fragmented lines which are not connected to a bigger network. West Africa Performs 'Strongly' in Hunger Reduction. By Patrick J. 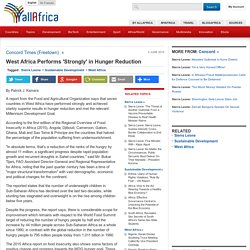 Kamara A report from the Food and Agricultural Organization says that seven countries in West Africa have performed strongly and achieved starkly superior results in hunger reduction and met the relevant Millennium Development Goal. According to the first edition of the Regional Overview of Food Insecurity in Africa (2015), Angola, Djibouti, Cameroon, Gabon, Ghana, Mali and Sao Tome & Principe are the countries that halved the percentage of the population suffering from undernourishment. "In absolute terms, that's a reduction of the ranks of the hungry by almost 11 million; a significant progress despite rapid population growth and recurrent droughts in Sahel countries," said Mr. China illegally fishing off W Africa - Greenpeace - BBC News. More than 70 Chinese vessels have been found fishing illegally off the coast of West Africa, Greenpeace says. 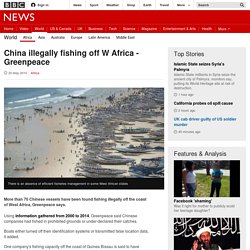 Using information gathered from 2000 to 2014, Greenpeace said Chinese companies had fished in prohibited grounds or under-declared their catches. Boats either turned off their identification systems or transmitted false location data, it added. One company's fishing capacity off the coast of Guinea Bissau is said to have exceeded its authorised limit by 61%. FISHING IN WEST AFRICA. Kora News - Gambia: D4B Trans-Gambia Bridge Construction Underway. The Vice President of the Republic of The Gambia Aja Dr Isatou Njie-Saidy on Friday laid the foundation stone of a four billion Dalasi Trans-Gambia Bridge as part of a host of activities marking the 50th independence anniversary of The Gambia. 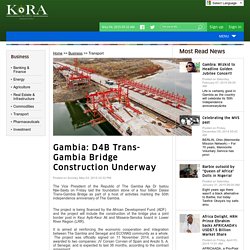 The project is being financed by the African Development Fund (ADF) and the project will include the construction of the bridge plus a joint border post in Keur Ayib-Keur Ali and Missera-Senoba board in Lower River Region (LRR). It is aimed at reinforcing the economic cooperation and integration between The Gambia and Senegal and ECOWAS community as a whole. The project was officially signed on 11 November 2014, a contract awarded to two companies: JV Corsan Corvian of Spain and Arezki S. A. of Senegal, and is expected to last 36 months, according to the contract agreement. Gambia to ban rice imports from 2016. Gambian President Yahya Jammeh said Sunday the west African country would ban rice imports from 2016, in a bid to boost demand for local produce and move towards self sufficiency. 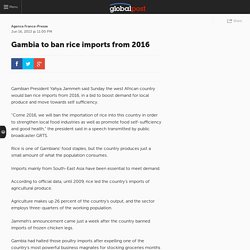 "Come 2016, we will ban the importation of rice into this country in order to strengthen local food industries as well as promote food self-sufficiency and good health," the president said in a speech transmitted by public broadcaster GRTS. Rice is one of Gambians' food staples, but the country produces just a small amount of what the population consumes. Imports mainly from South-East Asia have been essential to meet demand. Farafenni Named Among Africa's Five Most Booming Towns. By Musa Ndow The provincial town of Farafenni in the North Bank Region has been named among Africa's five most booming towns by HowWeMadeItInAfrica, a news website that offers insights into the continent. 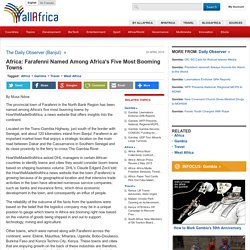 Camair-Co general manager Jean Paul Nana Sandjo said it expected to receive the 30 billion CFA francs within two to three weeks. For an airline company to succeed, it needs to be at a critical scale The money will be used to buy new planes and improve maintenance procedures. Prospects, Challenges of W’African Stock Exchange, Articles. Chairman, Board of the SEC, Mr. Suleyman Ndanusa Eromosele Abiodun writes that African financial markets could benefit from further regional integration of stock exchanges. Mammoth rail network to transform West Africa. Nigeria has largest economy in West Africa in services, manufacturing sectors: AfDB. ABUJA: The African Development Bank (AfDB) said that Nigeria was the West African’s largest market with great potential to be a main driver of regional integration considering its population.