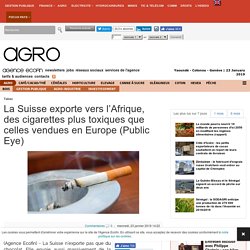 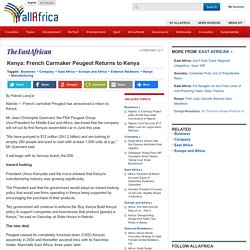 Mr Jean-Christophe Quemard, the PSA Peugeot Group Vice-President for Middle East and Africa, disclosed that the company will roll out its first Kenyan assembled car in June this year. "We have pumped in $12 million (Sh1.2 billion) and are looking to employ 200 people and want to start with at least 1,000 units at a go," Mr Quemard said. It will begin with its famous brand, the 508. Inward looking President Uhuru Kenyatta said the move showed that Kenya's manufacturing industry was growing significantly. The President said that his government would adopt an inward looking policy that would see firms operating in Kenya being supported by encouraging the purchase of their products. 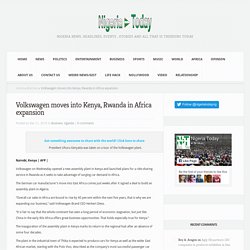 Kenya : German multinational Bitzer opens subsidiary in Kenya in Africa expansion - The Standard. NAIROBI: Bitzer, the world’s largest independent manufacturer of commercial and industrial refrigeration and air conditioning technologies has opened an office in Nairobi as it seeks to expand presence in Africa. 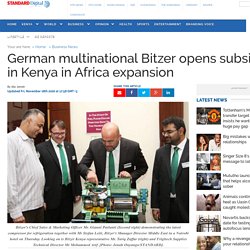 The Kenyan office is the second one for the German multi-national after South Africa to tap into the increasing demand for reliable refrigeration and air conditioning technologies in Kenya and the East Africa region. British Company Invests $1.5 Million in Malawian Peanut Factory. Social impact agribusiness investor AgDevCo has announced a $1.5 million investment in Afri-Oils Limited, a Malawian company seeking to revive the country’s peanut (groundnut) export industry. 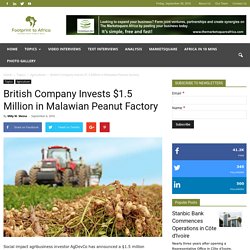 Jim Henderson, AgDevCo Malawi’s Associate Director said, “We are backing Afri-Oils to tackle the aflatoxin challenge and put Malawi back on the map as a major international peanut producer.” Aflatoxin is a naturally occurring mould that is harmful to health. Malawi produces more than 200,000 tonnes of groundnuts annually but exports, which exceeded 50,000 tonnes before the 1990s, collapsed following the introduction of stricter international quality standards. Afri-Oils aims to demonstrate that Malawi can meet international standards on the control of aflatoxin. Kenya : Volkswagen targets East Africa with Kenya car assembly plant - The Standard. Nairobi: Volkswagen's will resume producing cars in Kenya by the end of the year as it looks to sell more vehicles across the East African region. 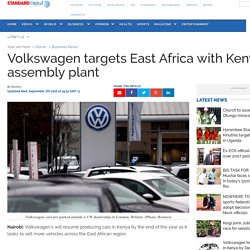 Polish tractors plowing a furrow to Africa. The latest Ursus deal worth $50 million (44 million euros) provides for the delivery of 2,400 tractors, tools and spare parts and includes equipping an assembly hall and service centers located in Tanzania. 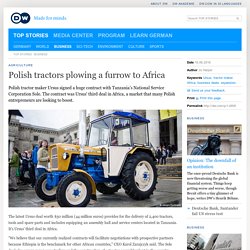 It's Ursus' third deal in Africa. "We believe that our currently realized contracts will facilitate negotiations with prospective partners because Ethiopia is the benchmark for other African countries," CEO Karol Zarajczyk said. The Sole deal also covers sugar cane trailers and the construction of a tractor assembly plant in the country. “We hope that the bridgehead gained in Ethiopia will open the way for further expansion of Africa and it will guarantee dynamic development of the company for the next two to three years," he continued. Firms in Ethiopia have purchased over 3,000 tractors, paying a total of $120 million, with Sole buying the bulk - 2,400 machines - for $55 million. 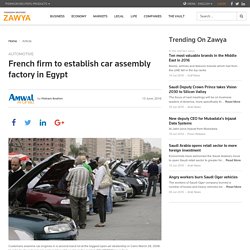 The factory is set to operate using high rates of locally-manufactured components. The minister made these remarks during his meeting with the Vice-president of one of largest French auto makers to discuss company's industrial investments in Egypt and make use of automotive feeding industries base in local market. Qabil added that the French company plans to contract with Egyptian firms to manufacture automotive components necessary to cover needs of the mother company in France and its branches all over the world. Arla Foods opens new milk powder production facility in Senegal - Drinks Business Review. 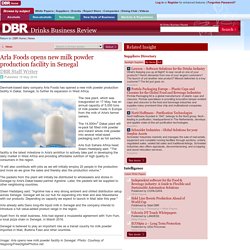 The new plant, which was inaugurated on 17 May, has an annual capacity of 5,000 tons of milk powder made in Europe from the milk of Arla's farmer owners. The 14,000m2 Dakar plant will re-pack fat filled milk powder and instant whole milk powder into several retail-sized packaging such as foil sachets. Arla Sub Sahara Africa head Steen Hadsbjerg said: "The facility is the latest milestone in Arla's ambition to actively take part in developing the dairy market in West Africa and providing affordable nutrition of high quality to consumers in the region. "It will also contribute with jobs as we will initially employ 20 people in the production and more as we grow the sales and thereby also the production volume. 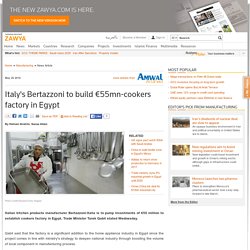 Qabil said that the factory is a significant addition to the home appliance industry in Egypt since the project comes in line with ministry's strategy to deepen national industry through boosting the volume of local component in manufacturing process. The minister made remarks during his meeting with company's Chairman Paolo Bertazzoni in the attendance of CEO of ElAraby Group Mohamed El-Araby. Cambridge University Press begins production in Nigeria, promises affordable books. The Cambridge University Press (CUP), the oldest publishing house in the world, has set up an office in Nigeria. The CUP publishes academic titles for pre-university students in more than 50 countries including emerging markets such as Malaysia, India, China, Kenya and South Africa. With an estimated 10 million Nigerian children unable to attend school, education reform in Nigeria remains a key priority for social and economic development. Over the last 20 years, the number of schools has almost doubled, and the number of universities more than tripled from 42 in 1990 to 141 in 2015.

But good quality teaching resources are still difficult to access. The Cambridge University Press is working closely with Nigerian authorities and leading education professionals to improve this situation. Le constructeur de camions russe KamAZ veut construire une usine au Maroc (vidéo) BMW M showroom opens in Pretoria. Johannesburg - The largest and second stand-alone BMW M showroom in the world has officially opened in Pretoria. The opening M showrooms form part of the expansion of BMW’s retail strategy and will pave the way for additional stand-alone BMW M showrooms in South Africa and the world. The other existing M showroom is in Singapore. The new showroom in South Africa has been established in Montana in Pretoria by Legacy Auto Group managing director Rob Sexton and dealer principal Christo Lindeque, who each have a 50 percent shareholding in the venture and two other dealerships on the site, Zambezi Auto (BMW) and Legends at Zambezi (Mini).

The dealerships have been established on the site of the old Zambezi Waterfront, a failed business that they acquired on auction. Sexton said more than R10 million was invested in the showroom, which involved the renovation of an existing building. In Mali: British American Tobacco agrees deal with state firm. Daimler sets up two regional centres in Kenya, South Africa. As part of global expansion plans, German commercial vehicle maker Daimler has set up two regional centres in Kenya and South Africa for retailing its products that would cater to 41 markets. Daimler India Commercial Vehicle, subsidiary of Stuttgart based Daimler AG, has set up its first regional centre for commercial vehicles in Dubai that would be responsible for Middle East and North Africa business.

The second regional centre has been established in Nairobi, Kenya while the third in Pretoria, South Africa, a company statement said. "These (two) regional centres will be responsible for the sales and service of all Daimler brands in 41 markets in East, Central and West Africa and will cover nine markets of Southern Africa," the statement said. Daimler Trucks Asia, a unit of Daimler Trucks, jointly operates Mitsubishi Fuso Truck and Bus Corporation (MFTBC) and Daimler India Commercial Vehicles. Daimler Trucks Asia would benefit from the regional set up with the FUSO brand.

Mercedes Benz latest to capitalise on Nigerian auto policy. According to Uwatse, Nigeria needs mini buses and ambulances. (Image source: CanadianPacific/Flickr) The company’s managing director in Nigeria Benson Uwatse said the country could benefit greatly from the current automotive policy, and that it required ambulances as well. However, Uwatse stressed that there was a lot to accomplish with the policy, as Nigeria lacks the infrastructure as well as the ancillary industries needed for vehicle assembly. Following the enforcement of the National Automotive Industry Development Plan by the erstwhile Jonathan government, the sector shows promise.

Daher has opened the plant for an investment of over € 15 million, including the cost of the buildings and land, according to L’Usine Nouvelle. The new plan will be built on an area of 10 000 m² with a possible extension of 15 000 m². It will manufacture metallic structures, composite structures, and aero engines. VIDÉO. Volkswagen opte pour l’Algérie pour sa deuxième usine en Afrique. Jaguar Land Rover Plans To Focus On Smaller Markets In Sub-Saharan Africa. Nigeria and Angola remain two of Jaguar Land Rover’s largest markets in sub-Saharan Africa, according to Nigel Clarke, director of operations for the region.This is despite both economies feeling the effect of the drop in oil prices over the last year. Angola gets roughly two-thirds of its revenue from oil.The luxury car manufacturer, with its sub-Saharan headquarters in Pretoria, exports the bulk of its vehicles to eight markets in the region – Angola, Ghana, Kenya, Mauritius, Nigeria, Tanzania, Zambia and Zimbabwe.However, over the next two years Jaguar Land Rover will focus on growing its business in six smaller markets – Senegal, Côte d’Ivoire, Gabon, Congo-Brazzaville, Malawi, Mozambique – through local country partners.

Algeria: Launch of Algerian-Spanish Factory of Panels of Prefabricated Housing Units. Rails : Agreement for creation of Algerian-Swiss maintenance, assembly company of trains. ALGIERS- The National railway Company (SNTF) and the Swiss company STADLER signed Tuesday, in Algiers, a Memorandum of Understanding for the creation, in Algeria, of a joint venture specializing in the maintenance and the installation of trains under the Swiss manufacturer’s brand name. The signing of this Memorandum of Understanding took place in the presence of Minister of Transports, Boudjema Talai and the Swiss State Secretary for Economic Affairs. The SNTF and the Swiss company are committed to creating the joint stock company STADLER-Algeria under the 51/49% rule and which is expected to begin production in June 2016.