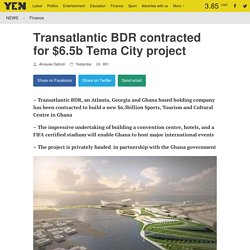 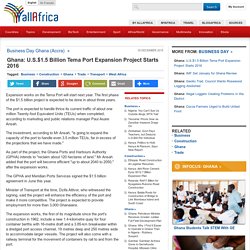 The first phase of the $1.5 billion project is expected to be done in about three years. The port is expected to handle thrice its current traffic of about one million Twenty-foot Equivalent Units (TEUs) when completed, according to marketing and public relations manager Paul Asare Ansah. Ghana: Tema Port to get terminal for agric products. A terminal is to be constructed at the Tema Harbour to facilitate the import and export of agricultural products. 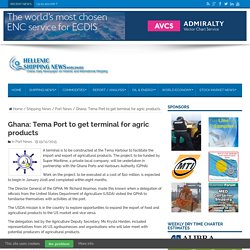 The project, to be funded by Super Maritime, a private local company, will be undertaken in partnership with the Ghana Ports and Harbours Authority (GPHA). Work on the project, to be executed at a cost of $10 million, is expected to begin in January 2016 and completed within eight months. Abengoa Inaugurates the First Desalination Plant in West Africa at Accra, Ghana. WASHINGTON, April 17, 2015 (GLOBE NEWSWIRE) -- Abengoa (MCE: ABG.B/P SM) (Nasdaq:ABGB), the international company that applies innovative technology solutions for sustainability in the energy and environment sectors, has inaugurated today Accra Sea Water Desalination plant. 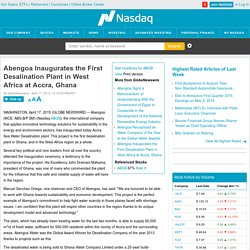 This project is the first desalination plant in Ghana, and in the West Africa region as a whole. Several key political and civic leaders from all over the country attended the inauguration ceremony, a testimony to the importance of the project. His Excellency John Dramani Mahama, president of Ghana, was one of many who commended the plant for the influence that this safe and reliable supply of water will have in the region. Manuel Sanchez Ortega, vice chairman and CEO of Abengoa, has said: "We are honored to be able to work with Ghana towards sustainability and economic development. US$600m port construction contract in Ghana won by Chinese firm｜WantChinaTimes.com. The signing ceremony between China Harbor Engineering Company and Atuabo Free Ports. 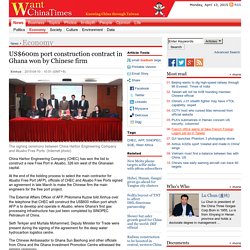 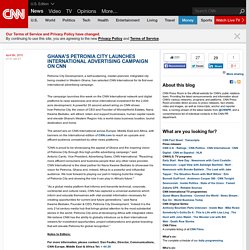 The campaign launches this week on the CNN International network and digital platforms to raise awareness and drive international investment for the 2,000 acre development. A powerful 30 second advert airing on CNN shows how Petronia City, the vision of CEO and Founder of WondaWorld Estates, Nana Kwame Bediako, will attract, retain and support businesses, human capital needs and elevate Ghana's Western Region into a world-class business location, tourist destination and home. The advert airs on CNN International across Europe, Middle East and Africa, with banners on the international edition of CNN.com to reach an upscale and affluent audience unmatched by other news platforms. Notes to Editors: Maersk announces $1bn port expansion. 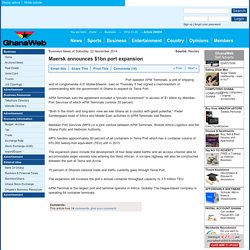 Moller-Maersk, said on Thursday it had signed a memorandum of understanding with the government of Ghana to expand its Tema Port. APM Terminals said the agreement included a "private investment" in excess of $1 billion by Meridian Port Services of which APM Terminals controls 35 percent. "Both in the short- and long-term view we see Ghana as a country with great potential," Peder Søndergaard head of Africa and Middle East activities in APM Terminals told Reuters. Meridian Port Services (MPS) is a joint venture between APM Terminals, Bolloré Africa Logistics and the Ghana Ports and Harbours Authority. MPS handles approximately 80 percent of all containers in Tema Port which has a container volume of 670,000 twenty-foot equivalent (TEU) unit in 2013. 70 percent of Ghana's national trade and traffic currently goes through Tema Port. Accra-Tema Motorway to expand into 3 lanes. 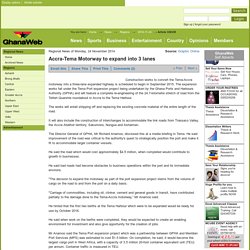 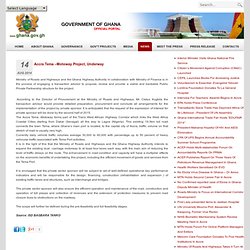 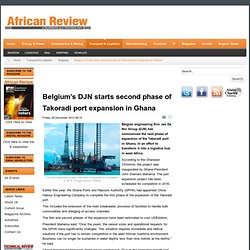 Ghana steps up infrastructure investment. A view over Takoradi Port, Ghana. The Accra-Takoradi road project aims to make the most of the port’s transport links The Ghanaian Government is opening the country up to public-private partnerships in an attempt to bolster the country’s infrastructure, which should help its economy take flight The Government of Ghana is currently facing monumental challenges in infrastructure development, which are proving to be a constraint on growth and development.

Chinese firm expected to begin Western Railway Modernization project by the year-end. Chinese Company expresses interest in Inland Port project. Thursday 23rd August, 2012 Printable Version Boankra (Ash), Aug. 23, GNA – A Chinese Company, China Wuyi Company Limited, has expressed interest in the Boankra Inland Port project and ready to pump over 350 million US dollars to get it operational. Documentations on the transaction between the Government and the Company are about 80 per cent complete and that work on the project could commence before the close of the year.

Mr Zhang Wenqing, the Country Director, has led a delegation to tour the site. They later paid a courtesy call on the traditional rulers at Boankra. Mr. The project is expected to create employment for the people and thereby better their economic situation.