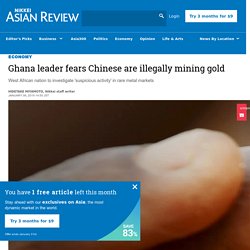 The government of Ghana will conduct a systematic and detailed investigation into the matter, Akufo-Addo said during an interview with Nikkei in Tokyo. Chinese state companies are active in Ghana, developing roads, railways and the power sector. "Ghana and China have a strong relationship," Akufo-Addo said. Ghana to rake in $2.3bn annually from Sankofa gas project - Ghana Business News. Mahama opens gold refinery in Ghana [Photos] President John Dramani Mahama has inaugurated the Gold Coast (GC) Refinery Ghana Limited, which officials say is the largest gold refinery in West Africa and the second largest in Africa. 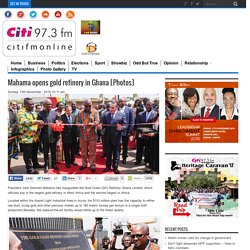 Located within the Airport Light Industrial Area in Accra, the $110 million plant has the capacity to refine raw dust, scrap gold and other precious metals up to 180 metric tonnes per annum in a single shift production.Besides, the state-of-the-art facility would refine up to the finest quality. The refinery, which would provide direct and indirect employment to 1,500 people, is the initiative of the Euroget Group of Egypt, Banking and Financial Services (BAFIS), an international joint stock company, and some local shareholders.

Ghana is one of the top 10 gold producing countries in the world with production over the last three years pegged at 92 metric tonnes per year. That is why the President described the refinery as a dream come true and a stamp of approval of Ghana’s investment climate. Ghana Just Mortgaged Its Natgas Reserves To China. The current downturn in the global oil and gas sector is yielding some innovative approaches to project finance. 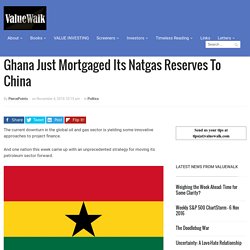 And one nation this week came up with an unprecedented strategy for moving its petroleum sector forward. Sub-Sharan Africa: Ghana to become 4th largest oil producer - Oil & Gas. In a report, the Pan African bank said with a potential oil output estimated at 240,000 bpd by 2019, the country could become the fourth largest producer of oil in Sub-Saharan Africa. 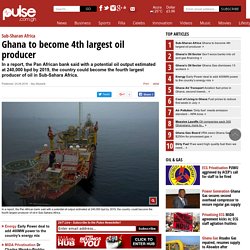 “Based on existing fields and field development plans Ghana crude oil output is estimated to be over 240,000 bpd by 2019. Ghana's economy receives boost as first oil is pumped from new field. Houndé to deliver 190,000 ounces of gold per year. The Houndé Project is expected to deliver average production of 190,000 ounces per year over a 10-year mine life at an AISC of US$709/oz, based on current reserves, Endeavour said in a statement. 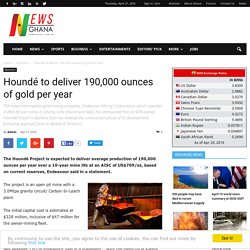 The project is an open pit mine with a 3.0Mtpa gravity circuit/ Carbon-In-Leach plant. The initial capital cost is estimated at $328 million, inclusive of $47 million for the owner-mining fleet. The Project is permitted to commence operations and early earthworks have begun. Ghana's Gold Diggers - Land and Rivers Laid to Waste. Large swathes of Ghana's gold belt have been laid to waste in the search for the precious metal by illegal small-scale miners. 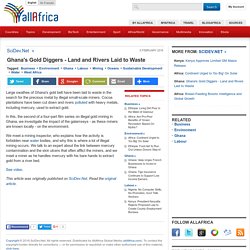 Cocoa plantations have been cut down and rivers polluted with heavy metals, including mercury, used to extract gold. In this, the second of a four-part film series on illegal gold mining in Ghana, we investigate the impact of the galamseys - as these miners are known locally - on the environment. We meet a mining inspector, who explains how the activity is forbidden near water bodies, and why this is where a lot of illegal mining occurs. We talk to an expert about the link between mercury contamination and the skin ulcers that often afflict the miners, and we meet a miner as he handles mercury with his bare hands to extract gold from a river bed. See video. Ghana to develop import substitution companies for mines. The Ghana Chamber of Mines, in collaboration with the Minerals Commission and other partners, are supporting Ghana-based industries for the production of some selected products for the mining industry. 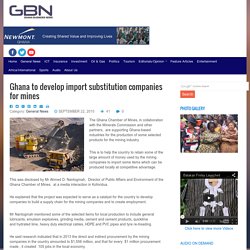 This is to help the country to retain some of the large amount of money used by the mining companies to import some items which can be produced locally at competitive advantage. This was disclosed by Mr Ahmed D. Nantogmah, Director of Public Affairs and Environment of the Ghana Chamber of Mines, at a media interaction in Koforidua. He explained that the project was expected to serve as a catalyst for the country to develop companies to build a supply chain for the mining companies and to create employment. Mr Nantogmah mentioned some of the selected items for local production to include general lubricants, emulsion explosives, grinding media, cement and cement products, quicklime and hydrated lime, heavy duty electrical cables, HDPE and PVC pipes and tyre re-treading. Ghana: Ghana signs US$7bn agreement to develop gas project. Ghana on Tuesday signed a US$7-billion agreement with two energy companies for the development of oil and gas off-shore Cape Three Points in the west of the country. 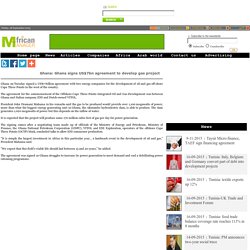 The agreement for the commencement of the Offshore Cape Three Points Integrated Oil and Gas Development was between Ghana and Italian company ENI and Dutch-owned VITOL. Ghana to put West Africa on oil radar. Business News of Friday, 31 July 2015 Source: www.upi.com One of the larger oil fields in Africa, the so-called TEN project, is on pace to start production by the middle of next year, Tullow Oil declared. 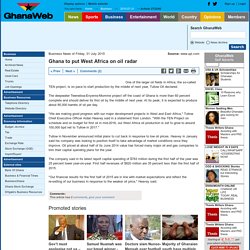 The deepwater Tweneboa-Enyenra-Ntomme project off the coast of Ghana is more than 60 percent complete and should deliver its first oil by the middle of next year. At its peak, it is expected to produce about 80,000 barrels of oil per day. "We are making good progress with our major development projects in West and East Africa," Tullow Chief Executive Officer Aidan Heavey said in a statement from London. Ghana: Ghana signs US$7bn agreement to develop gas project. Ghana aims to be port of call for west Africa’s offshore oil industry. Business News of Sunday, 5 July 2015 Source: thenational.ae Ghana will break ground this year on Atuabo Free Port, a US$1 billion facility on its western coast. 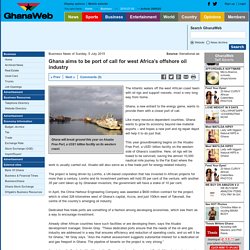 The Atlantic waters off the west African coast teem with oil rigs and support vessels, most a very long way from home. Ghana: Ghana signs US$7bn agreement to develop gas project. Ghana earns over $4.5b from 2014 gold exports - Minister - Ghana Business News. Ghana earns more than $4.5 billion from gold exports in 2014, the Minister of Lands and Natural Resources says, according to a Ghana News Agency (GNA) report. The GNA cites the Minister, Nii Osae Mills as saying in 2014, the mining sector contributed 16 per cent of government revenue and in terms of total merchandise exports; the sector contributed 35 per cent in 2014. “It is worthy of note that since 1991, the mining sector has been the single largest contributor to total merchandise export with gold accounting for 95 per cent of the mineral portfolio.

In 2014, Ghana produced over 4.18 million ounces of gold, which resulted in export revenues of over $4.5 billion dollars,” he said. Meanwhile, in 2013 Ghana recorded low earnings from gold exports during the first ten months of 2013, according to the Bank of Ghana. Earnings from gold fell by 12% to $4.2 billion. Ghana loses $135 million annually due to small scale mining - By Francis Tandoh Ghana is said to be losing an amount of 500 million cedis or 135 million U.S. dollars annually through the non-registration of small scale and artisanal miners (SSAM). Small-scale miners produce 1.4 million ounces of gold. Ghana’s gold production from artisanal and small-scale mining hit 1.4 million ounces, last year. The figure represented 34 per cent of the country’s total gold production for the period. Nii Osah Mills, the Lands and Natural Resources Minister, however, said notwithstanding the significant contribution the sector was making to the economy, there was a downside.

These include widespread environmental degradation- the destruction of the vegetation, farms and pollution of water bodies. , Consequently, Nii Osah Mills said their operations would be properly regulated to help maintain safety standards. Performance_of_the_Ghana_Mining_Industry_in_2012.pdf. Ghana to invest b in new oil fields. Ghana - Ghana National Petroleum Company. Ghana oil output to more than double by 2021. Ghana Oil Output to More Than Double by 2021 With New Fields. Ghana, West Africa’s second-biggest economy, expects oil production to more than double to 250,000 barrels a day by 2021 as output rises at the Jubilee field and other sites start pumping. The country has new crude discoveries at different stages of appraisal and development, Nana Boakye Asafu-Adjaye, chief executive officer of the state-owned Ghana National Petroleum Corp. known as GNPC, said in an interview in the capital, Accra, yesterday.

At the Tullow Oil Plc-operated Jubilee field, 60 kilometers (37 miles) off Ghana’s western coast, output has averaged 110,000 barrels a day over the last three months, he said. In the next “five to eight years we will be spending $20 billion” to develop Jubilee and other discoveries, Asafu-Adjaye said. Jubilee, which started output in December 2010, is Ghana’s lone crude-exporting oil field. Nigeria, Africa’s biggest oil producer, pumped 1.8 million barrels a day in March.

“First oil from TEN could be in late 2016,” Asafu-Adjaye said. Eni, Vitol discovers more Gas in Ghana. Two European companies have discovered 1.8 trillion cubic feet of gas in the Western Region. Since 2007 Ghana and its partners have made 23 discoveries in oil and gas. ACCRA, March 19 (Xinhua) — Ghana and its partners have made 23 discoveries of oil and gas resources since 2007, including the Jubilee discovery, Chief Executive Officer (CEO) of the Ghana National Petroleum Corporation (GNPC) Nana Boakye Asafu-Adjaye said on Tuesday.

Ghana makes more gas discoveries. Two European companies have discovered 1.8 trillion cubic feet of gas in the Western Region. Ghana To Set Up Oil Gas Information Center. The government in collaboration with the International Development Association (IDA) is to establish Oil and gas Information Resource Centre (IRC) which would operate as an interactive space for information on the Oil and Gas sector in the country. The IRC, which is to be independent, will complement the Ministry of Energy's supply information and would provide access to information, not only supplied by the ministry but also by independent research and international journals and publications.

Output in the period rose to 1.53Moz, commission CEO Ben Aryee said here in an interview with Bloomberg News. “High gold prices are motivating mining firms to up production,” he added. “New companies have also come on stream.” Prices rose to an average of US$1,689/oz in the first quarter from US$1,389/oz for the same period a year earlier, according to data compiled by Bloomberg. “The higher rates make it profitable for mining companies to mine low-grade ore,” Aryee said.