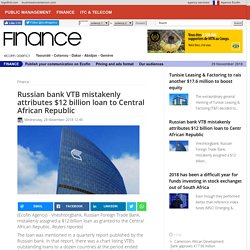 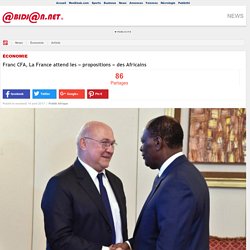 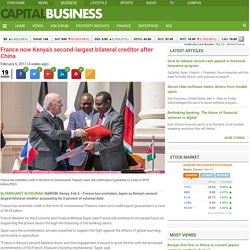 France has extended credit in the form of concessional Treasury loans and credit-export guarantee to a tune of Sh78 billion. French Minister for the Economy and Finance Michael Sapin said France will continue its increased focus on supporting the private sector through the financing of the banking sector. Sapin says the commitments are also expected to support the fight against the effects of global warming, particularly in agriculture.

UK pushes Nigeria’s foreign investment to 16-month high. Banking and Financial News,Islamic Business and Finance, Commercial Banking. EIB said that the office would support the development of long-term public and private sector investment in the region in partnership with the EU and manage relations between authorities. 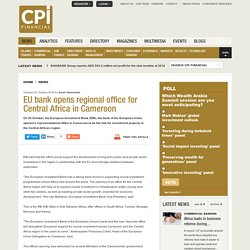 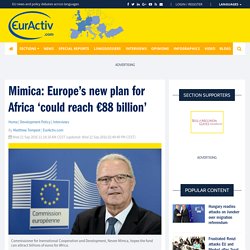 EU development aid chief Neven Mimica gives the details in an interview with EurActiv.com Neven Mimica is EU Commissioner for International Development and Cooperation. Mimica was interviewed by EurActiv.com’s Matthew Tempest about how the new investment scheme will work. EU Commission President Jean-Claude Juncker announced a new “European External Investment Plan” in his State of the Union speech. What is it – and how will it work? Banking and Financial News,Islamic Business and Finance, Commercial Banking. The advisory group plans to bring together African business leaders and senior representatives from pan-African economic bodies to discuss the challenges and opportunities presented by the development of Africa’s capital market infrastructure, LSEG said in a statement. 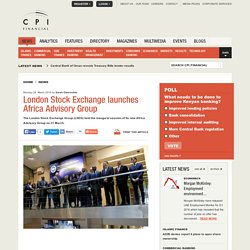 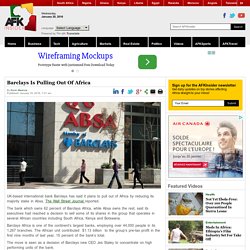 The bank which owns 62 percent of Barclays Africa, while Absa owns the rest, said its executives had reached a decision to sell some of its shares in the group that operates in several African countries including South Africa, Kenya and Botswana. Barclays Africa is one of the continent’s largest banks, employing over 44,000 people in its 1,267 branches. The African unit contributed $1.13 billion to the group’s pre-tax profit in the first nine months of last year, 15 percent of the bank’s total. The move is seen as a decision of Barclays new CEO Jes Staley to concentrate on high performing units of the bank. 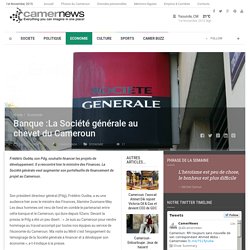 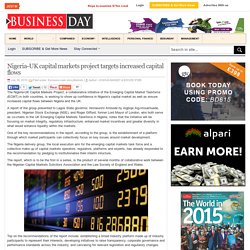 A report of the group presented to Lagos State governor, Akinwunmi Ambode by Aigboje Aig-Imoukhuede, president, Nigerian Stock Exchange (NSE), and Roger Gifford, former Lord Mayor of London, who both serve as co-chairs to the UK Emerging Capital Markets Taskforce in Nigeria, notes that the initiative will be focusing on market integrity, regulatory infrastructure, enhanced market incentives and greater diversity in what would enhance liquidity within the markets. One of the key recommendations in the report, according to the group, is the establishment of a platform through which market participants can collectively focus on key issues around market development. Ethiopia: European Investment Bank Establishes Presence in Addis.

By Lucy Kassa Addis becomes one of many African country in which EIB has set up office The European Investment Bank (EIB) has opened a representative office in Addis Abeba, on July 16, 2015, following an agreement signed with the Ministry of Finance & Economic Development (MoFED). 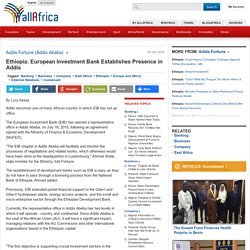 "The EIB chapter in Addis Abeba will facilitate and shorten the processes of negotiations and related works, which otherwise would have been done at the headquarters in Luxembourg," Ahmed Shide, state minister for the Ministry, told Fortune. The establishment of development banks such as EIB is easy as they do not have to pass through a licensing process from the National Bank of Ethiopia, Ahmed added. Previously, EIB extended partial financial support to the Gibe-I and Gibe-II hydropower plants, energy access projects, and the small and micro enterprise sector through the Ethiopian Development Bank.

But an independent macroeconomist is skeptical about the effectiveness of the office in Ethiopia. La BEI va ouvrir des bureaux au Cameroun et en Côte d’Ivoire. How Bob Diamond Plans To Build Africa's Largest Bank In 3 Years. A lot has been said about former Barclays chief executive Bob Diamond and his style of management since he resigned in July 2012 over the Libor scandal. Fast forward to 2015 and his investment firm Atlas Mara, that seeks to create the largest bank in sub-Saharan Africa, is now a big deal in the region’s investment circle. Atlas Mara, a banking ventures formed by Diamond and Dubai-based African billionaire businessman Ashish Thakkar, has raised $625 million in two fundraisings since 2013 and invested it in financial institutions across seven African countries.

It now plans to enter three to five more African countries before consolidating all its investments into one brand in the next three years. “We think that there are 10 to 12 key markets for us over time. $1.4 billion for Africa's key growth industries. Follow @AfricaBizReview on Twitter. The Fundo Soberano de Angola (FSDEA) has announced the launch of several investment funds that will target high growth industries in a bid to promote economic and social development in Angola and the broader Sub-Saharan region. The total funding exceeds $1.4 billion and will be deployed over the next three to five years. The sectors that have been earmarked for investment include timber ($250 million) Agriculture ($250 million) Healthcare ($400 million) and also a dedicated Mezzanine Fund to support entrepreneurship through debt funding ($250 million).

A commercial entity was also recently created that to target domestic micro-businesses by providing guidance to management, particularly with business strategy. The new funds add to a $1.1 billion Infrastructure Fund that will target investments in PPPs, privatizations and large industrial developments, and a $500 million fund to bring hotels on the continent up to international standards. Norway bets big on growth in Africa - Times LIVE. The $890-billion (R10.7-trillion) fund, which is already in South Africa, was spreading its investments to the north and west of the continent in search of opportunities, Yngve Slyngstad, CEO of Norges Bank Investment Management, which manages the fund, said in an interview this week.

"What's new is that we have crept north - Kenya and Nigeria. We're looking at quite a few West African countries," he said. "In North Africa, for quite some time, we've been invested in Morocco and Egypt; there are also some investments coming in Tunisia. " Africa has emerged as one of the fastest-growing regions globally. And although the slump in oil has hurt Nigeria and Angola, the IMF still sees growth rates for sub-Saharan Africa that are twice those for developed nations. Banking: French bank targets Chinese investments in West Africa. Photo©Reuters French bank Societe Generale plans to expand its retail and commercial activities in West Africa to target increasing Chinese investments in the region, a bank executive said on Thursday. SocGen, which is present in 18 African countries mostly in the French-speaking west of the continent, is playing catch-up with Barclays and Standard Chartered in the sector, said Alexandre Maymat, deputy head of international banking and financial services.

There are 38 active Chinese enterprises in Cameroon, thanks to our new strategy "China has become the biggest investor in Africa. CEO of World’s Biggest Wealth Fund Turns to Africa for Profits. Norway’s sovereign-wealth fund is pouring a bigger share of its cash into Africa in a bid to capture some of the fastest growth in the global economy. The $890 billion fund, which is already in South Africa, is spreading its investments to the north and west of the continent in search of opportunities, Yngve Slyngstad, chief executive officer of Norges Bank Investment Management, which manages the fund, said in an interview on Wednesday at Bloomberg’s headquarters in New York.

“What’s new is that we have crept north -- Kenya and Nigeria -- we’re looking at quite a few west African countries,” he said. “In North Africa, for quite some time, we’ve been invested in Morocco and Egypt, there are also some investments coming in Tunisia.” Africa has emerged as one of the fastest growing regions globally. And while the slump in oil has hurt Nigeria and Angola, the International Monetary Fund still sees growth rates for Sub-Saharan Africa that are twice those for developed nations.

External Help. Deutsche Bank to fund infrastructure in CMR at 300bn CFA. Business News of Monday, 23 March 2015 Source: APA Cameroon could get an investment of 300 billion CFA francs from the Deutsche Bank for the construction of infrastructure in the areas of roads, social housing, health, energy and water supply. Trade in this effect is underway between the Cameroonian Government and the Spanish group Eurofinsa, we learned on Monday from the Ministry of Economy and Planning and the development of the territory.

If the sectors in which Eurofinsa wishes to invest receives the consent of the authorities, they would like to prioritise road projects. Barclays Africa seeks Nigerian investment banking license, sees growth opportunities in the continent. Barclays Africa Group Ltd.’s corporate and investment banking unit has approached Nigerian authorities for approval to convert its representative office to a fully fledged business in the continent’s biggest economy. The bank has been increasing its staff in Lagos in preparation for receiving the license, Temi Ofong, head of corporate and investment banking outside of South Africa for Barclays Africa, said in a Feb. 13 interview in Gaborone, Botswana.