This would be a very interesting plan to model after. Waste water treatment plant using CHP, as well as solar, wind and a micro-hydro generator (using a water outfall pipe) on-site. They are very nearly 100% off the grid. – ofer2

Here, Ed Ritchie reports from one plant which has also added solar PV, on-site wind and hydro power to reach the point where it supplies all its energy requirements. 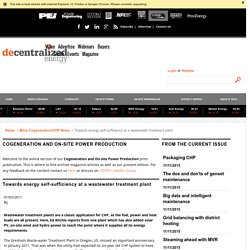 The Gresham Waste-water Treatment Plant in Oregon, US, missed an important anniversary in January 2011. That was when the utility had expected its six-year old CHP system to have paid back its cost and to start turning a profit. There was no celebration, but no disappointment either, because the system actually hit that break-even date about 19 months earlier, in May of 2009. But this is more than a financial success story. The city's planners took some of their first steps on the path to sustainability in the late 1980s, with the commissioning of a biogas-fuelled CHP system at the wastewater treatment plant. Unfortunately, by 2003 the corrosive nature of biogas had taken its toll. Resource efficiency, water and waste - Environment, energy and climate change management - ThyssenKrupp AG. As a diversified industrial group with high technology and materials expertise, thyssenkrupp considers resource efficiency as a matter of course. 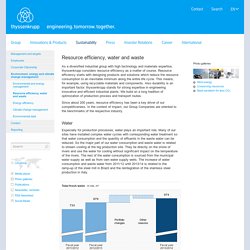 Resource efficiency starts with designing products and solutions which reduce the resource consumption to an inevitable minimum along the entire life cycle. This means, for example, using recyclable materials and components. Also durability is an important factor. thyssenkrupp stands for strong expertise in engineering innovative and efficient industrial plants. We build on a long tradition of optimization of production process and transport routes. Since about 200 years, resource efficiency has been a key driver of our competitiveness. Water Especially for production processes, water plays an important role. Total fresh water in mio. m3 Portfoliochanges Otherreasons Fiscal year 2011/2012 Fiscal year 2012/2013.

Wastewater guide. International technology partnership to focus on water problems. The University of Chicago and Ben-Gurion University of the Negev have signed an agreement to begin exploring a research partnership that would create new water production and purification technologies for deployment in regions of the globe where fresh water resources are scarce. 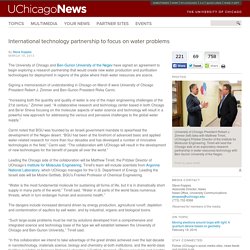 Signing a memorandum of understanding in Chicago on March 8 were University of Chicago President Robert J. Zimmer and Ben-Gurion President Rivka Carmi. “Increasing both the quantity and quality of water is one of the major engineering challenges of the 21st century,” Zimmer said. “A collaborative research and technology center based in both Chicago and Be'er Sheva focusing on the molecular aspects of water science and technology will result in a powerful new approach for addressing the various and pervasive challenges to the global water supply.”

Carmi noted that BGU was founded by an Israeli government mandate to spearhead the development of the Negev desert. My Daily Kvetch: Falestinian Water Libel. Two main aquifers; the mountain aquifer and the coastal aquifer. 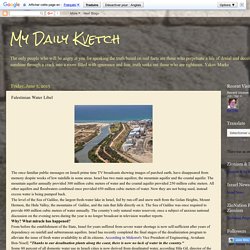 Why? For years suffered from severe water shortage is now self-sufficient after years of dependency on rainfall and subterranean aquifers. In addition to which since the desalinization plants work at the same level 24/7 the excess water is being pumped back into the underground water reserves.