How much energy does leaving appliances on standby waste? The facts: energy savings advice. Does Having Appliances on Standby Use Power? By: Kathryn Senior PhD - Updated: 20 Dec 2016| *Discuss You might think that when you switch an electrical appliance off, it uses no power, but you could not be more wrong. 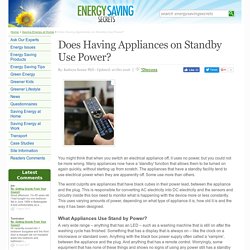 Run an Energy Efficient Office. By: Kelly Fenn - Updated: 17 Jul 2015| *Discuss While most employees make attempts to be energy efficient in their homes their environmental conscience tends to be less active once they get to work. 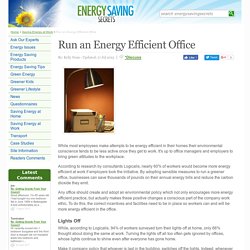 It's up to office managers and employers to bring green attitudes to the workplace. According to research by consultants Logicalis, nearly 60% of workers would become more energy efficient at work if employers took the initiative. By adopting sensible measures to run a greener office, businesses can save thousands of pounds on their annual energy bills and reduce the carbon dioxide they emit. Any office should create and adopt an environmental policy which not only encourages more energy efficient practice, but actually makes these positive changes a conscious part of the company work ethic. Lights Off While, according to Logicalis, 94% of workers surveyed turn their lights off at home, only 66% thought about doing the same at work. New Technology New Habits. The devices quietly running up your energy bills. The Energy Saving Trust estimates that an average household will spend up to £80 a year powering appliances left on standby and not in use. 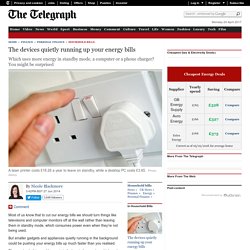 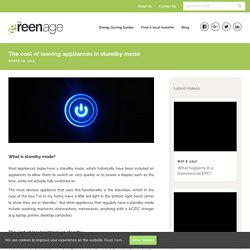 Most appliances today have a standby mode, which historically have been included on appliances to allow them to switch on very quickly or to power a display such as the time, while not actually fully switched on. The most obvious appliance that uses this functionality is the television, which in the case of the two TVs in my home, have a little red light in the bottom right hand corner to show they are in ‘standby’. But other appliances that regularly have a standby mode include washing machines, dishwashers, microwaves, anything with a AC/DC charger (e.g laptop, printer, desktop computer). Standby power - Wikipedia. "Phantom load" redirects here. 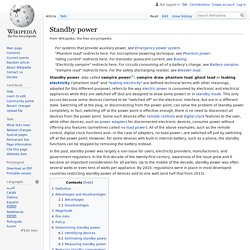 For microphone powering technique, see Phantom power. "Idling current" redirects here. For transistor quiescent current, see Biasing. In the past, standby power was largely a non-issue for users, electricity providers, manufacturers, and government regulators. In the first decade of the twenty-first century, awareness of the issue grew and it became an important consideration for all parties. Standby energy consumption adds $860 million to electricity bills. A quick glance around the average home and you will see them. 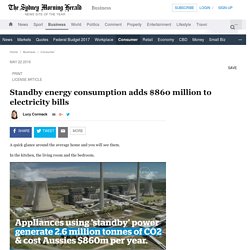 In the kitchen, the living room and the bedroom. This is a modal window. This modal can be closed by pressing the Escape key or activating the close button. Caption Settings Dialog Beginning of dialog window. Measuring Standby Power. Standby Power: is it really 10% of Household Electricity Consumption? It's an often quoted statement: Standby power consumption is about 10% of household electricity usage. 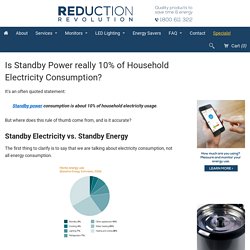 But where does this rule of thumb come from, and is it accurate? Standby Electricity vs. Standby Energy The first thing to clarify is to say that we are talking about electricity consumption, not all energy consumption. If you do some research, you might find charts like this one from the Your Home Technical Manual. Many homes in Australia use natural gas or LPG for hot water and wood or gas for heating. This is on the low side of all the estimates I have seen.

Standby power consumption chart. Power consumption: How much are your gadgets costing you? - CNET. Earth Hour started out in Sydney just two years ago as a pie-in-the-sky idea, but its amazing momentum will this year see residents of 2848 cities in 84 countries switching off their lights in a show of solidarity for the cause of reducing energy consumption. 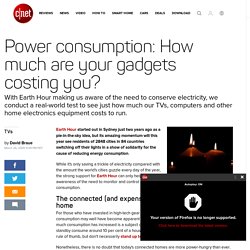 While it's only saving a trickle of electricity compared with the amount the world's cities guzzle every day of the year, the strong support for Earth Hour can only help raise awareness of the need to monitor and control electricity consumption. The connected (and expensive) home For those who have invested in high-tech gear for the home, the need to monitor energy consumption may well have become apparent upon receipt of the first electricity bill.

Standby Mode: How Much Energy (and Money) are Your Household Electronics Burning Through When You Aren't Using Them? - EnergyRates.ca. There really is no such thing as an “off” button on the majority of electronic devices you buy these days. 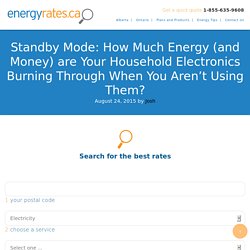 If you wanted to be more accurate, you could pencil in an extra word next to the off setting: “mostly off.” The reason for that is because electronics generally sleep with one eye open. Your TV, DVR, and other devices with a remote control use a little electricity so they can see if you hit the power button. TV and computer displays also burn a little energy so that they can turn on more quickly and don’t have to go through a warm-up period. Pulling the plug on standby power. STRANGE though it seems, a typical microwave oven consumes more electricity powering its digital clock than it does heating food. 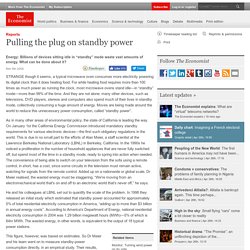 For while heating food requires more than 100 times as much power as running the clock, most microwave ovens stand idle—in “standby” mode—more than 99% of the time. And they are not alone: many other devices, such as televisions, DVD players, stereos and computers also spend much of their lives in standby mode, collectively consuming a huge amount of energy. Moves are being made around the world to reduce this unnecessary power consumption, called “standby power”.

As in many other areas of environmental policy, the state of California is leading the way. On January 1st the California Energy Commission introduced mandatory standby requirements for various electronic devices—the first such obligatory regulations in the world. He and his colleagues at LBNL set out to quantify the scale of the problem. This figure, however, was based on estimates. J.P. Estimating Appliance and Home Electronic Energy Use. How to Measure Home Power Usage. The modern home uses a lot of juice. Decades ago, it was simply appliances, lights, the radio, and the TV that consumed electricity. Today, it's all that and so much more: PCs, charging phones, always-on routers, DVRs, pool filters, security systems, even smart speakers like Amazon Echo—to name just a few. There may not be much you can do about the draw from each item you've got plugged in at home.