Natural selection. Variation exists within all populations of organisms. This occurs partly because random mutations occur in the genome of an individual organism, and these mutations can be passed to offspring. Throughout the individuals’ lives, their genomes interact with their environments to cause variations in traits. (The environment of a genome includes the molecular biology in the cell, other cells, other individuals, populations, species, as well as the abiotic environment.)

Coevolution. The general conclusion is that coevolution may be responsible for much of the genetic diversity seen in normal populations including: blood plasma polymorphism, protein polymorphism, histocompatibility systems, etc.[2] There is little evidence of coevolution driving large-scale changes in Earth's history, since abiotic factors such as mass extinction and expansion into ecospace seem to guide the shifts in the abundance of major groups.[3] However, there is evidence for coevolution at the level of populations and species. 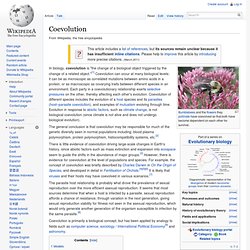 Pleiotropy. Pleiotropy occurs when one gene influences multiple, seemingly unrelated phenotypic traits, an example being phenylketonuria, which is a human disease that affects multiple systems but is caused by one gene defect.[1] Consequently, a mutation in a pleiotropic gene may have an effect on some or all traits simultaneously. Pleiotropic gene action can limit the rate of multivariate evolution when natural selection, sexual selection or artificial selection on one trait favours one specific version of the gene (allele), while selection on other traits favors a different allele. The underlying mechanism of pleiotropy in most cases is the effect of a gene on metabolic pathways that contribute to different phenotypes. Genetic correlations and hence correlated responses to selection are most often caused by pleiotropy. 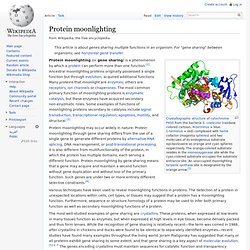 Protein moonlighting through gene sharing differs from the use of a single gene to generate different proteins by alternative RNA splicing, DNA rearrangement, or post-translational processing. It is also different from multifunctionality of the protein, in which the protein has multiple domains, each serving a different function. Protein moonlighting by gene sharing means that a gene may acquire and maintain a second function without gene duplication and without loss of the primary function. Such genes are under two or more entirely different selective constraints.[4] Various techniques have been used to reveal moonlighting functions in proteins. Gene duplication. Gene duplication (or chromosomal duplication or gene amplification) is a major mechanism through which new genetic material is generated during molecular evolution. 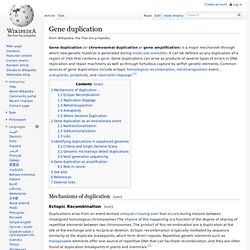 It can be defined as any duplication of a region of DNA that contains a gene. Gene duplications can arise as products of several types of errors in DNA replication and repair machinery as well as through fortuitous capture by selfish genetic elements. Common sources of gene duplications include ectopic homologous recombination, retrotransposition event, aneuploidy, polyploidy, and replication slippage.[1]

Heredity. Overview[edit] In humans, eye color is an example of an inherited characteristic: an individual might inherit the "brown-eye trait" from one of the parents.[1] Inherited traits are controlled by genes and the complete set of genes within an organism's genome is called its genotype.[2] Recent findings have confirmed important examples of heritable changes that cannot be explained by direct agency of the DNA molecule. 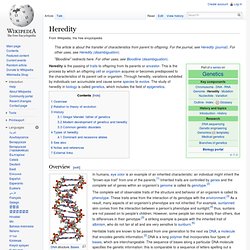 These phenomena are classed as epigenetic inheritance systems that are causally or independently evolving over genes. Relation to theory of evolution[edit] Darwin's initial model of heredity was adopted by, and then heavily modified by, his cousin Francis Galton, who laid the framework for the biometric school of heredity.[23] Galton found no evidence to support the aspects of Darwin's pangenesis model, which relied on acquired traits.[24] Exaptation. History and definitions[edit] The idea that the function of a trait might shift during its evolutionary history originated with Charles Darwin (Darwin 1859). For many years the phenomenon was labeled "preadaptation", but since this term suggests teleology, which is contrary to a basic principle of natural selection, it has been replaced by the term exaptation. The idea had been explored by several scholars[4] when in 1982 Gould and Vrba introduced the term "exaptation". 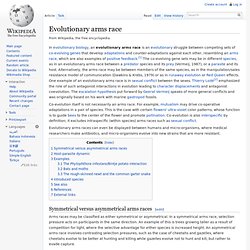 Symmetrical versus asymmetrical arms races[edit] Arms races may be classified as either symmetrical or asymmetrical. In a symmetrical arms race, selection pressure acts on participants in the same direction. An example of this is trees growing taller as a result of competition for light, where the selective advantage for either species is increased height. An asymmetrical arms race involves contrasting selection pressures, such as the case of cheetahs and gazelles, where cheetahs evolve to be better at hunting and killing while gazelles evolve not to hunt and kill, but rather to evade capture. Host-parasite dynamic[edit] Selective pressure between two species can include host-parasite coevolution. Genetic diversity. Genetic diversity, the level of biodiversity, refers to the total number of genetic characteristics in the genetic makeup of a species. It is distinguished from genetic variability, which describes the tendency of genetic characteristics to vary.

Genetic diversity serves as a way for populations to adapt to changing environments. With more variation, it is more likely that some individuals in a population will possess variations of alleles that are suited for the environment. Those individuals are more likely to survive to produce offspring bearing that allele. Adaptation. General principles[edit] The significance of an adaptation can only be understood in relation to the total biology of the species.— Julian Huxley[1] Adaptation is one of the two main processes that explain the diverse species we see in biology, such as the different species of Darwin's finches. The other is speciation (species-splitting or cladogenesis), caused by geographical isolation or some other mechanism.[8][9] A favorite example used today to study the interplay of adaptation and speciation is the evolution of cichlid fish in African lakes, where the question of reproductive isolation is much more complex.[10][11] Adaptation is not always a simple matter, where the ideal phenotype evolves for a given external environment.