The Equity Gap, 1965-2013 [Infographic] At long last the Supreme Court has issued its ruling in the Fisher v. 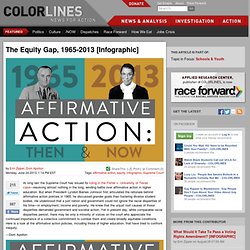 University of Texas case—resolving almost nothing in the long, winding battle over affirmative action in higher education. But when President Lyndon Baines Johnson first articulated the rationale behind affirmative action policies in 1965, he discussed grander goals than fostering diverse student bodies. He understood that a just nation and government could not ignore the racial disparities of his time—in employment, income and poverty. He knew that the unjust root causes of those disparities demanded government and societal action.

Yet in present day, while comparable racial disparities persist, there may be only a minority of voices on the court who appreciate the continued importance of a collective commitment to combat them and create broadly equitable conditions. —Dom Apollon. On the fringes of the public sphere. Discourse. Discourse analysis, analyse du discours, Diskursanalyse, análisis del discurso, analise do discurso, discours, Diskurs, discourse, discurso. MLP Natural Language Processor. Discourse analysis. Critical discourse analysis.pdf (application/pdf Object) Discourse Analysis. It is difficult to give a single definition of Critical or Discourse Analysis as a research method. 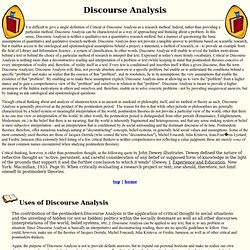 Critical discourse analysis. Critical discourse analysis (CDA) is an interdisciplinary approach to the study of discourse that views language as a form of social practice and focuses on the ways social and political domination are reproduced in text and talk.[1] Since Norman Fairclough's Language and Power in 1989, CDA has been deployed as a method of multidisciplinary analysis throughout the humanities and social sciences. 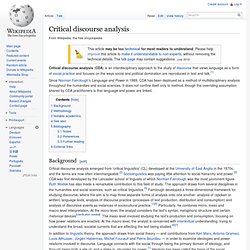 It does not confine itself only to method, though the overriding assumption shared by CDA practitioners is that language and power are linked. A priori and a posteriori. The terms a priori ("from the earlier") and a posteriori ("from the later") are used in philosophy (epistemology) to distinguish two types of knowledge, justification, or argument: A priori knowledge or justification is independent of experience (for example "All bachelors are unmarried"). 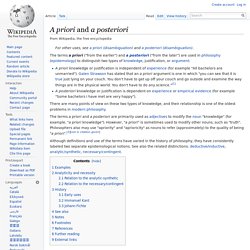 Galen Strawson has stated that an a priori argument is one in which "you can see that it is true just lying on your couch. You don't have to get up off your couch and go outside and examine the way things are in the physical world. You don't have to do any science. Episteme. Episteme, as distinguished from techne, is etymologically derived from the Ancient Greek word ἐπιστήμη for knowledge or science, which comes from the verb ἐπίσταμαι, "to know". 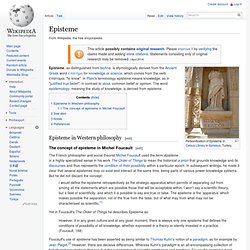 In Plato's terminology episteme means knowledge, as in "justified true belief", in contrast to doxa, common belief or opinion. Thelma Golden: How art gives shape to cultural change. Discourse community. Michel Foucault. Born in Poitiers, France to an upper-middle-class family, Foucault was educated at the Lycée Henri-IV and then the École Normale Supérieure, where he developed an interest in philosophy and came under the influence of his tutors Jean Hyppolite and Louis Althusser. 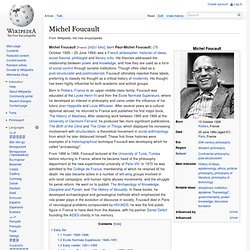 After several years as a cultural diplomat abroad, he returned to France and published his first major book, The History of Madness. After obtaining work between 1960 and 1966 at the University of Clermont-Ferrand, he produced two more significant publications, The Birth of the Clinic and The Order of Things, which displayed his increasing involvement with structuralism, a theoretical movement in social anthropology from which he later distanced himself. 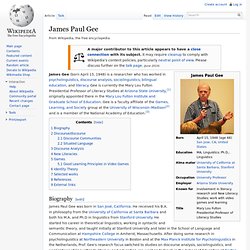 Gee is currently the Mary Lou Fulton Presidential Professor of Literacy Studies at Arizona State University,[1] originally appointed there in the Mary Lou Fulton Institute and Graduate School of Education. Gee is a faculty affiliate of the Games, Learning, and Society group at the University of Wisconsin–Madison[2] and is a member of the National Academy of Education.[3] Biography[edit] James Paul Gee was born in San José, California. He received his B.A. in philosophy from the University of California at Santa Barbara and both his M.A. and Ph.D in linguistics from Stanford University. Judith Butler. Judith Butler (born February 24, 1956) is an American philosopher and gender theorist, whose work has had a significant influence on the fields of feminist, queer, and literary theory, philosophy, political philosophy, and ethics.[2] Butler is Maxine Elliot Professor in the Departments of Rhetoric and Comparative Literature and the Co-director of the Program of Critical Theory at the University of California, Berkeley, where she has taught since 1993. 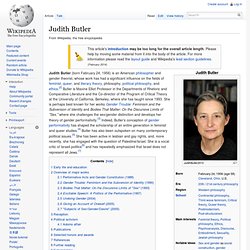 Early life and education[edit] Butler was born in Cleveland, Ohio,[8] to a family of Hungarian and Russian Jewish descent.[9] Most of her maternal grandmother's family perished in the Holocaust.[10] As a child and teenager, she attended both Hebrew school and special classes on Jewish ethics, where she received her "first training in philosophy. Alec McHoul. Alec McHoul (14 June 1952) is a British/Australian Ethnomethodologist. 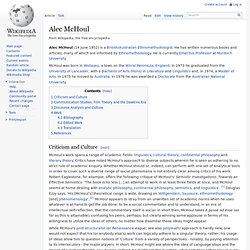 He has written numerous books and articles, many of which are informed by Ethnomethodology. He is currently Emeritus Professor at Murdoch University. Criticism and Culture[edit] While McHoul's post-structuralist (or Renaissance-esque; see also polymath) approach is hardly new, one would not expect that his (or anybody else's) work can logically adhere to a singular theory, rather, his usage of ideas allow him to question notions of 'Culture' from a variety of perspectives - notably, by paying attention to its interlocutors - the major players. Discipline and Punish. Discipline and Punish: The Birth of the Prison (French: Surveiller et punir: Naissance de la Prison) is a 1975 book by the French philosopher Michel Foucault. 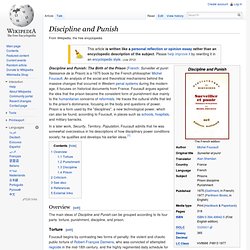 An analysis of the social and theoretical mechanisms behind the massive changes that occurred in Western penal systems during the modern age, it focuses on historical documents from France. Foucault argues against the idea that the prison became the consistent form of punishment due mainly to the humanitarian concerns of reformists. He traces the cultural shifts that led to the prison's dominance, focusing on the body and questions of power.