How to Make a Paper Craft Chibi Robot: PART 1. Student Passion and TEDx Talks. I instituted 20 Time in my classroom this year. 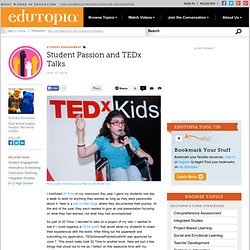 I gave my students one day a week to work on anything they wanted as long as they were passionate about it. Here is a link to their blogs where they documented their journey. At the end of the year, they each needed to give an oral presentation focusing on what they had learned, not what they had accomplished. As part of 20 Time, I decided to take on a project of my own. I wanted to see if I could organize a TEDx event that would allow my students to share their experiences with the world. 3 Powerful Observations One of the things I saw as my students worked on their projects and prepared for their talks was the value they found in their work. Another thing I saw with my students as they prepared for the TEDx event was the support they offered one another.

The last thing that really sticks out for me was the element of pride I saw. The Big Event. Cardboard Pinball Machine. Makedo Pinball Machine. Robots. Build Cardboard Furniture Video. Cardboard Cryptex Safe! ELECTROSPHERIC RAY GUN (a free papercraft model) If you like keeping a ray gun handy, just to be on the safe side, then this electrospheric device should suit your needs quite nicely. 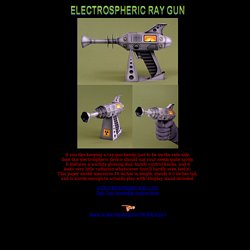 It features a warmly glowing dial, handy control knobs, and it leaks very little radiation whatsoever (you'll hardly even feel it). This paper model measures 10 inches in length, stands 6.5 inches tall, and is sturdy enough to actually play with! Display stand included. ELECTROSPHERIC RAY GUNRay Gun Assembly Instructions. How to Write an Instructable. The first question from every new Instructabler is "what should I write about? 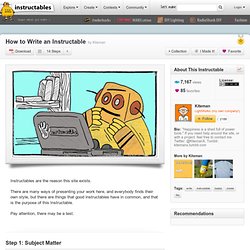 " The simple answer is... anything. If you have enough passion to create a project, then you have the passion to share it. You should preferably publish something original, but with tens of thousands of projects already published here, it's possible that somebody else has already had a go at your idea, even if you thought of it by yourself. Don't let that put you off. It's quite likely that many people will prefer your style of writing, or find your instructions easier to follow. Man Crafts: zoetrope from coffee can. A zoetrope is a classic toy which, when spun, delivers the illusion of animation. 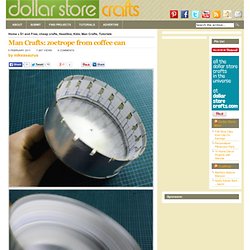 The construction is simple and the results are always fun to watch. Zoetropes work by using a cylinder with vertical slits cut along the top edge and a band of sequential drawings/photographs placed inside the cylinder. When the cylinder is spun the viewer looks at the images inside the cylinder through the vertical slots, resulting in each image blurring together in rapid succession creating the illusion of motion.

With this easy to make and fun device you can make your own looping animations, regardless of your artistic abilities. The possibilities are endless! Cardboard Chassis for Cheap Robots 1: Boxbot. Previously I made an Instructable on cheap motors and wheels for robots, but wheels alone don't make a robot. 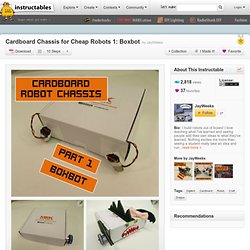 If you want your robot to cruise in style, it's going to need a sturdy and stylish body. It's easy to make something rough but functional, but in my experience taking the time to make something look good usually makes it work better in the long run. A clean design makes it easier to add features, swap out parts, and generally keeps you from going nuts. Homemade Pinball Machine. LEGO Candy Machine. LEGO Mindstorms claw machine. Robots. LEGO bricks + paper toys by muji. Apr 12, 2012 LEGO bricks + paper toys by muji a new series of kits by LEGO and muji lets users form three-dimensional figures out of LEGO pieces and paperabove, LEGO and paper ‘ladybug’ muji and LEGO have partnered to create new ‘LEGO bricks and paper’ kits, a DIY toy set that lets users construct 3D animals and other figures, including functioning spinning tops and toy airplanes. the first editions of the set, featured on designboom in 2009 (here!) 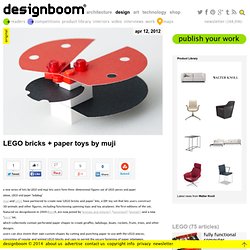 , are now joined by ‘animals and vehicles‘, ‘movement‘, ‘animals‘, and a new ‘basic‘ kit, which collectively contain perforated paper shapes to create giraffes, ladybugs, boats, rockets, fruits, trees, and other designs. To Make A Spacecraft That Folds And Unfolds, Try Origami. Hide captionThe solar panels of the International Space Station (ISS) are just one example of the many kinds of fragile scientific instruments that require inventive packing and deployment tricks. 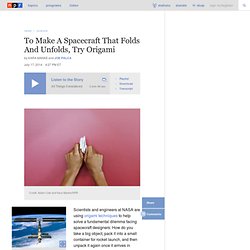 The solar panels of the International Space Station (ISS) are just one example of the many kinds of fragile scientific instruments that require inventive packing and deployment tricks. Scientists and engineers at NASA are using origami techniques to help solve a fundamental dilemma facing spacecraft designers: How do you take a big object, pack it into a small container for rocket launch, and then unpack it again once it arrives in space — making sure nothing breaks in the process. Brian Trease, an engineer at NASA's Jet Propulsion Laboratory, says one way is to use something called the Miura fold, named for its inventor, Japanese astrophysicist Koryo Miura. As an example, Trease folds up a sheet of paper using the Miura fold. 8. Sqwears Demo. Sqwears.doc. Paper Toys - Paper Cut-Out Models - Free at PaperToys.com.