The Last Reef on Earth. First images of unique Brazilian coral reef at mouth of Amazon. The first images have been released of a unique coral reef that stunned scientists when discovered in 2016 at the mouth of the Amazon. 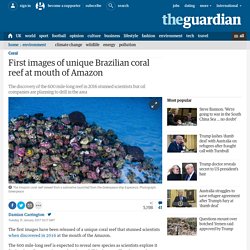 The 600 mile-long reef is expected to reveal new species as scientists explore it further, but oil companies are planning to drill in the area. The photographs were captured from a submarine launched to a depth of 220 metres from the Greenpeace ship Esperanza. Campaigners say drilling must be prevented to protect the reef. The discovery of the reef, which stretches from French Guiana to Brazil’s Maranhão state, was a complete surprise to scientists because many of the world’s great rivers have major gaps in reef systems at their mouths. Amazon Reef: First images of new coral system. Image copyright Greenpeace The first pictures of a huge coral reef system discovered in the Amazon last year have been released by environmental campaigners. 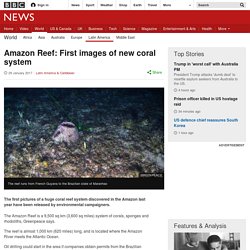 The Amazon Reef is a 9,500 sq km (3,600 sq miles) system of corals, sponges and rhodoliths, Greenpeace says. The reef is almost 1,000 km (620 miles) long, and is located where the Amazon River meets the Atlantic Ocean. Oil drilling could start in the area if companies obtain permits from the Brazilian government, the group warns. Video: Breaking Down Reefs, Building Up Beaches. On the remote western coast of Australia lies a UNESCO World Heritage Site above and below the sea. 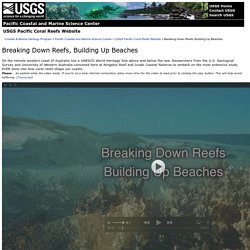 Researchers from the U.S. Geological Survey and University of Western Australia convened here at Ningaloo Reef and Jurabi Coastal Reserve to embark on the most extensive study EVER done into how coral reefs shape our coasts. Please... be patient while the video loads. Great Barrier Reef scores D for health for fifth year in a row. The Great Barrier Reef has been given a D on a report card for its overall health by the federal and Queensland governments for the fifth year in a row. 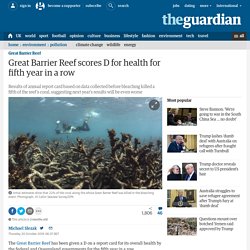 The results of the annual report card were based on data collected before this year’s climate change-induced bleaching event that killed about a fifth of the reef’s coral, suggesting next year’s results will be even worse. The report card measures the progress towards water pollution targets, as well as the overall health of the Great Barrier Reef’s ecosystems, including coral and seagrass. Scientists discover hidden world of Hawaii's coral 'twilight zone'

The “twilight zone” of Hawaii’s deep coral reefs are home to vast algae meadows and support the highest rates of species found nowhere else in Earth’s seas, scientists have discovered. 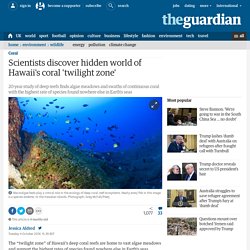 A 20-year study of the archipelago’s poorly-explored mesophotic – middle light – coral zone also found the deep-reef habitats are home to many unique and distinct species not found on shallow reefs with vast areas of 100% coral cover. While much is known about shallow, tropical coral habitats, the richness, diversity and ecological importance of these deep sea ecosystems, found at depths of 30-150 metres, has only recently been understood. In one of the largest and most comprehensive studies of its kind, published on Tuesday in the journal PeerJ, the entire 2,590km Hawaiian archipelago was covered over two decades using a combination of submersibles, remote-operated vehicles, drop cameras, data recorders and advanced diving techniques. 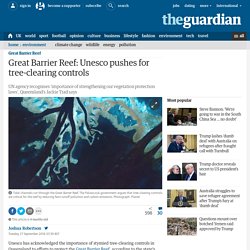 Trad has emerged from a meeting in Paris with a Unesco official, Fanny Douvere, to declare the state Labor government would restore clearing controls, one of its “key commitments” to the reef, if it won another term of office. She indicated the defeat of Labor’s clearing controls owing to crossbench opposition in a hung parliament last month had been raised during an otherwise “positive meeting” about the Queensland government’s progress on a long-term conservation plan for the reef.

Coral bleaching in Okinawa – in pictures. Sea snails could save Great Barrier Reef from starfish. Image copyright Mike Hall/Australian Institute of Marine Science A giant sea snail could be the answer to getting rid of coral-eating starfish from the Great Barrier Reef, Myles Gough reports. 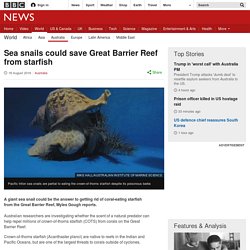 Australian researchers are investigating whether the scent of a natural predator can help repel millions of crown-of-thorns starfish (COTS) from corals on the Great Barrier Reef. Crown-of-thorns starfish (Acanthaster planci) are native to reefs in the Indian and Pacific Oceans, but are one of the largest threats to corals outside of cyclones. These animals, which are covered in hundreds of venomous spikes, feed on the flesh of corals until all that's left is a calcium carbonate skeleton. Between 1985 and 2012, they were responsible for 42% of all lost coral cover in Australia. Tourists Try to See Great Barrier Reef Before It's Gone. A recent survey confirms that an unprecedented number of tourists are visiting Australia's Great Barrier Reef because they are afraid the World Heritage site will soon disappear. 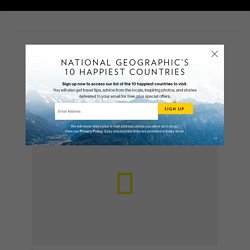 A survey published this week in the Journal of Sustainable Tourism found 69 percent of recent tourists felt they needed to see the reef before it dies off. Half of the reef has died over the past three decades thanks to warming ocean water, pollution, coastal development, and aggressive invasive species, such as starfish. This year, the Great Barrier Reef has suffered its worst bleaching event on record, damaging more than 90 percent of the reef's 1,400 miles (2,250 kilometers). Hu(g)e worries. Geographical’s regular look at the world of climate change. 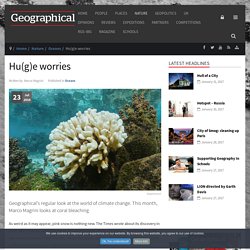 This month, Marco Magrini looks at coral bleaching As weird as it may appear, pink snow is nothing new. 'Kissing' Corals Filmed in the Wild for the First Time. Corals reefs can stretch for thousands of kilometres, and the photogenic menagerie of animals they house is obvious to the naked eye. 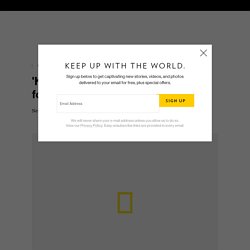 But reefs are built by tiny coral polyps—tentacled animals that look like sea anemones and are just millimetres in size. The microbes they depend on, including the algae that provide them with energy and the bacteria and viruses that smother their surfaces, are smaller still. To understand how reefs really work, you need to look closer. So Andrew Mullen and Tali Treibitz from the University of California San Diego have created an underwater microscope that, for the first time, allows divers to zoom in on wild corals.