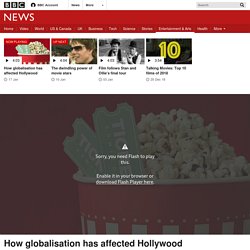 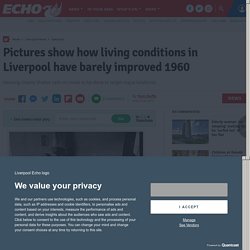 Shelter has released iconic images taken by photographer Nick Hedges of families living amidst cramped conditions in 1960s Liverpool. Kevin Garvey, a policy officer at the charity, recently visited families in Anfield and Speke who were tenants in privately-owned accomodation. He told how the gap between today and the conditions captured by Hedges all those years ago is “wafer thin”. Mr Garvey, who comes from Wirral, said: “I visited one family in Anfield near the stadium where two parents and their five children are sharing a single bedroom. “Their ‘beds’ comprise of two double air mattresses shoved together, covering almost all of the floor space. “The walls are covered, floor to ceiling, in mould.

“Their tiny bathroom is in no better condition. Mr Garvey also told of another visit to a home in Speke. Read More Liverpool Nostalgia. Changing Spaces, Making Places (case study): Lympstone and Toxteth Flashcards. Social inequality youtube - Recherche Google. Types of Social Inequality. What is Globalization. Globalization is a process of interaction and integration among the people, companies, and governments of different nations, a process driven by international trade and investment and aided by information technology. 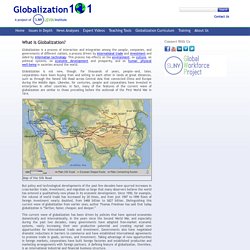 This process has effects on the environment, on culture, on political systems, on economic development and prosperity, and on human physical well-being in societies around the world. Globalization is not new, though. For thousands of years, people—and, later, corporations—have been buying from and selling to each other in lands at great distances, such as through the famed Silk Road across Central Asia that connected China and Europe during the Middle Ages.

Likewise, for centuries, people and corporations have invested in enterprises in other countries. In fact, many of the features of the current wave of globalization are similar to those prevailing before the outbreak of the First World War in 1914. Technology has been the other principal driver of globalization. Gentrification definition. High Street: Five ways UK shopping has changed - BBC News. Image copyright Getty Images Hardly a month goes by without news of another wave of shops shutting or of stores losing money. 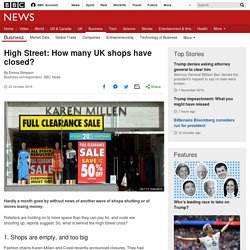 Retailers are holding on to more space than they can pay for, and costs are shooting up, reports suggest. So, what is behind the High Street crisis? 1. Shops are empty, and too big Fashion chains Karen Millen and Coast recently announced closures. The fast-growing online fashion chain Boohoo snapped up the brands following their collapse. The number of empty shops already stands at a record high. In July the proportion of all shops that are empty reached 10.3%, its highest level since January 2015. High street crisis deepens: 1 in 12 shops closed in five years. English and Welsh town centres have lost 8% of their shops on average since 2013, according to a Guardian analysis, with some major destinations such as Stoke and Blackpool shuttering two out of 10 town centre sites over the past five years. 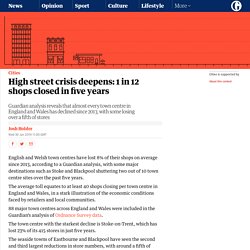 The average toll equates to at least 40 shops closing per town centre in England and Wales, in a stark illustration of the economic conditions faced by retailers and local communities. 88 major town centres across England and Wales were included in the Guardian’s analysis of Ordnance Survey data. The town centre with the starkest decline is Stoke-on-Trent, which has lost 23% of its 415 stores in just five years. The seaside towns of Eastbourne and Blackpool have seen the second and third largest reductions in store numbers, with around a fifth of stores lost since 2013. Major cities such as Southampton and Sheffield are also among the worst affected.

Street View Before And After: King's Cross. Pushing the boater out: London's property crisis spreads to the water. Marcus Trower has seen a lot of changes to London’s canals over the eight years he has lived on his boat. 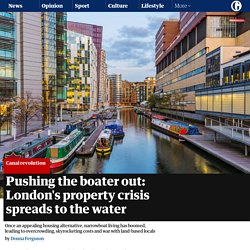 Where once, even in the heart of the city, there was usually a grassy bank he could moor next to, there are now just smooth concrete slabs. Residential moorings have been taken over by businesses running bar barges and restaurant boats, and tall glass buildings have sprung up on the waterside, overshadowing the water. “No mooring here,” the signs say. But for Trower, it is the level of abuse he receives in central London that makes him feel most unwelcome.

“It ranges from being called a pikey to having stones thrown at my boat.” The vast majority of London’s “continuous cruisers” – boaters like Trower who live on the city’s canals but move around regularly so they are not obliged to pay for an expensive permanent mooring – get harassed by local residents nowadays, he says. Marcus Trower, from the National Bargee Travellers Association, with his son, Cillian. “They just don’t like us.