Pioneering review of 632 ocean studies says marine food chain will collapse. A world-first review of hundreds of studies on ecological change in the world’s oceans suggests a global alteration of the marine ecosystem due to increasing CO2 emissions will result in the collapse of the food chain as we know it. 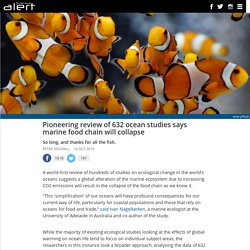 "This 'simplification' of our oceans will have profound consequences for our current way of life, particularly for coastal populations and those that rely on oceans for food and trade," said Ivan Nagelkerken, a marine ecologist at the University of Adelaide in Australia and co-author of the study. While the majority of existing ecological studies looking at the effects of global warming on ocean life tend to focus on individual subject areas, the researchers in this instance took a broader approach, analysing the data of 632 studies covering a wide range of ocean environments, ecosystems, and marine species. "We know relatively little about how climate change will affect the marine environment. Is Your Garden Hose Leaching BPA, Lead, and Phthalates into Your Water? With the weather heating up, our old seen-better-days plastic water table is getting renewed attention, particularly from my 18-month-old. 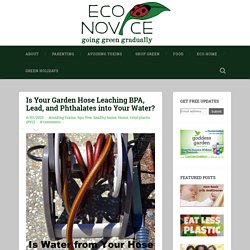 I noticed several weeks ago when I would fill it up with water that I would smell this strong synthetic chemical smell coming from the table. I don't know what kind of plastic the water table is, but it has spent a lot of time in the sun, probably breaking down under the UV light, and I began to wonder if it was OK to let my kids continue to play with it. HealthyStuff on Garden Hoses And then I saw the latest report from HealthyStuff.org: "Hazardous Chemicals found in Gardening Water Hoses. " A few highlights from the report:Of the 21 new garden hoses purchased from major retailers like Home Depot, Walmart, and Target, two-thirds were made of polyvinyl chloride (PVC). PVC, We Meet Again Of course. I'm guessing the hoses my husband bought were vinyl. Avoiding Toxins from Garden Hoses. Nurseries & Gardening Dane County, WI, United States. What Is the Difference Between Organic and Mineral Based Fertilizers?

There is much debate around the issue of organic fertilizer vs. mineral based (inorganic, all natural) fertilizers and the preference of one or the other. 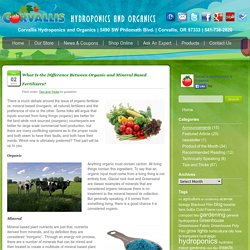 Some folks will argue that inputs sourced from living things (organic) are better for the land while rock sourced (inorganic) counterparts are better for large scale commercial food production, but there are many conflicting opinions as to the proper route and both seem to have their faults, and both have their merits. Which one is ultimately preferred? That part will be up to you. Organic Anything organic must contain carbon. Mineral Mineral based plant nutrients are just that, nutrients derived from minerals, and by definition they are considered “inorganic”. This mineral based type of plant food represents the many advancements in science and technology, and is the primary type of plant food used in many hydroponic systems trying to grow organically.

Organic vs Mineral. Drone Captures Breathtaking Footage Inside The Worlds Largest Cave. Earth - Peacocks' tails make noises too low for humans to hear. Peacock tails are one of the most beautiful sights in the animal kingdom. 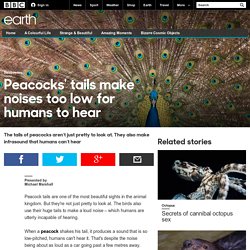 But they're not just pretty to look at. The birds also use their huge tails to make a loud noise – which humans are utterly incapable of hearing. When a peacock shakes his tail, it produces a sound that is so low-pitched, humans can't hear it. That's despite the noise being about as loud as a car going past a few metres away. Angela Freeman and James Hare of the University of Manitoba in Winnipeg, Canada have shown that peacocks can make these "infrasound" noises with their tails.

"Humans don't often think about infrasound as a potential signal, because we don't perceive it," says Freeman. The pair's results are published in the journal Animal Behaviour. Hare got the idea when he visited a local zoo and saw a peacock shaking its tail at a concrete wall. Freeman and Hare recorded the sounds made by 46 displaying peacocks. To human ears, it sounds like "rustling grass in the wind".