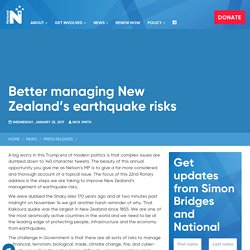 Nine years ago: NZ's forgotten magnitude 7.8 monster quake struck Fiordland. It was the biggest New Zealand quake in nearly a century, beginning with a seismic lurch, then exploding with an energy-packed snap. 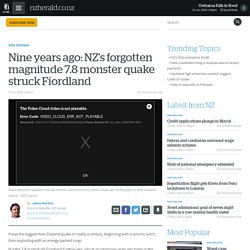 But the 7.8 magnitude Fiordland Earthquake, which erupted nine years ago today in the remote and bushy wilderness near Dusky Sound, has been over-shadowed by bigger events that came in its wake. A seismologist nonetheless says the monster jolt - which unloaded the equivalent of 500 million tonnes of TNT, 25,000 times that of the energy release of the atomic bomb dropped on Nagasaki in 1945 - proved a rude wake-up call after a relatively sleepy period in our earthquake history.

The main shock, striking at 9.22pm on Wednesday, July 15, 2009, was a case of large reverse faulting, and triggered by the Australian tectonic plate pushing beneath the Pacific plate, upon which Fiordland lies. While the rupture began at about 30km depth, the quake quickly travelled upward and to the south, driving most of its energy offshore and moving from a lurch to a snap.

Future volcanic eruptions could cause more climate disruption. Major volcanic eruptions in the future have the potential to affect global temperatures and precipitation more dramatically than in the past because of climate change, according to a new study led by the National Center for Atmospheric Research (NCAR). 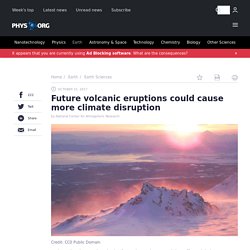 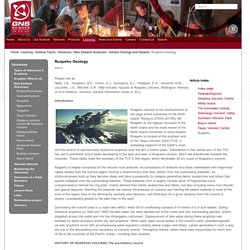 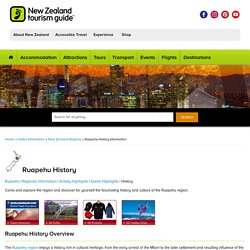 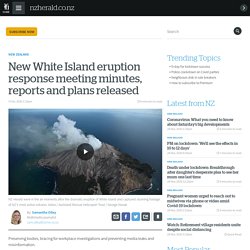 These were just some of the challenges faced behind the scenes in Whakatāne in the aftermath of the Whakaari/White Island eruption on December 9. The death toll of the eruption stands at 21. New information about how the situation unfolded has been revealed in a cache of documents released to NZME under the Official Information Act by the Whakatāne District Council and Bay of Plenty Regional Council. White Island Tours, owned by Ngāti Awa Group Holdings Ltd, had 38 boat passengers and five crew on the island at 2.11pm, when the first eruption occurred, according to the Bay of Plenty Civil Defence Emergency Management Group's first situation report on December 9. The other people on the island were the pilot of a private helicopter and three passengers. That eruption created an ash plume of about 12,000 feet and there were further eruptions at 4.30pm and 5.49pm that afternoon.

White Island. Earthquakes at a Plate Boundary / Earthquakes. An earthquake is a sudden motion or trembling in the crust caused by the abrupt release of accumulated stress along a fault, a break in the Earth’s crust. 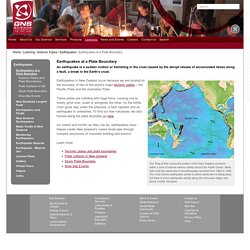 The ‘Ring of Fire’ shows the position of the New Zealand continent within a zone of intense seismic activity around the Pacific Ocean. Black dots mark the epicentres of all earthquakes recorded from 1964 to 1999. The most intense earthquake activity is where subduction is taking place, but there is some earthquake activity along the mid-ocean ridges and above mantle ‘hot-spots’ 6 ways volcanoes benefit Earth, our environment. Earthquakes - Ask a Real Expert - Ask an expert - The Lab - Australian Broadcasting Corporation's Gateway to Science. Earthquakes, Tsunamis & Volcanoes « Ask a Real Expert « Ask an expert « previous question | all | next question » Q6: Earthquakes have always been part of the earth's geology. 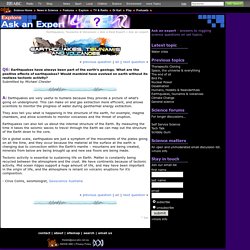 What are the positive effects of earthquakes? Would mankind have evolved on earth without its restless tectonic activity? Submitted by Michael Chester. Where were NZs largest earthquakes? / New Zealand Earthquakes / Earthquakes. The Richter scale. Historic earthquakes. Early days Māori have many accounts of violent earthquakes in the early days of settlement, including one at Rotorua where it was said that a pā (fortified village) was swallowed up and the land became a lake. 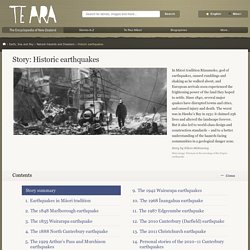 European settlement From 1840, European settlers began arriving. Over the next century, there were several major earthquakes, including: Wairarapa, 1855 (magnitude 8.2). Hawke’s Bay, 1931 This magnitude 7.8 earthquake struck at 10.48 a.m. on 3 February 1931. Aftershocks continued for months and many people moved to refugee camps. 1942 onwards These major quakes have struck New Zealand since 1931: Wairarapa, 1942 (7.2 and 6.8). List of earthquakes in New Zealand. Wikimedia list article Major active fault zones of New Zealand showing variation in displacement vector along the Pacific–Indo-Australian plate boundary (left) and the distribution of earthquakes (magnitude 5 or greater) 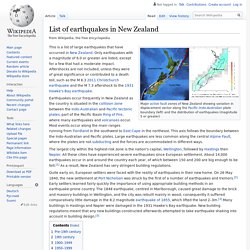