Doujins. The tragedy of James Bond. There is something rather tragic about James Bond. 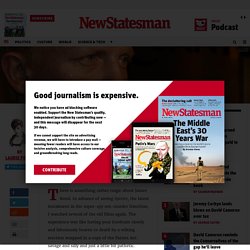 In advance of seeing Spectre, the latest instalment in the super-spy sex-murder franchise, I watched several of the old films again. The experience was like having your forebrain slowly and laboriously beaten to death by a wilting erection wrapped in a copy of the Patriot Act: savage and silly and just a little bit pathetic. James Bond is a guilty pleasure but one in which the pleasure is increasingly overwhelmed by the guilt. Even Daniel Craig seems to know this. The actor acknowledged, just before the premiere of his latest turn as Bond, that the character “is actually a misogynist.

Nobody is saying that Bond isn’t fun. The new Bond films work because they tackle that anxiety head-on. Craig animates the automaton that is Bond by asking just what it would take to make a person behave in this horrific way – and like any piece of well-done puppetry, the effect is sinister. That is why James Bond isn’t evil.

Bndon beingundead. Memorable [Hetalia] Disgusting history lessons Entries. Nick Carraway is gay and in love with Gatsby. I HAVE READ The Great Gatsby more times than any other novel. 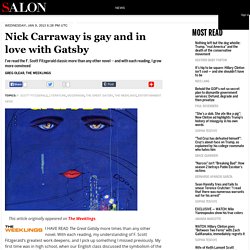 With each reading, my understanding of F. Scott Fitzgerald’s greatest work deepens, and I pick up something I missed previously. My first time was in high school, when our English class discussed the symbolism of the green light and the eyes on the billboard and the silk shirts in the vast closet. In college, I was drawn to Gatsby as tragic romantic and giver of epic parties of the kind I wanted to throw.

After I moved to New York, I read the book again and finally understood its geography. <i>The Great Gatsby</i> Movie Needed to Be More Gay. Tobey Maguire plays Nick Carraway as guileless heterosexual—but in the novel, his sexuality's ambiguous, and he's linked to Gatsby & co. by their shared need for deception. 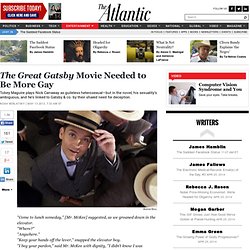 Warner Bros. "Come to lunch someday," [Mr. McKee] suggested, as we groaned down in the elevator. "Where? ""Anywhere. "" . . . F, Scott Fitzgerald's The Great Gatsby is usually thought of as the story of... well, the great Jay Gatsby, poor boy made nouveau riche, and his efforts to win the aristocratic Daisy Buchanan away from her boorish aristocratic husband Tom. Baz Luhrman's recently film version of Gatsby makes a nod to this incident: Mr.

Reigisa doujin. Type: Doujinshi Title: Be Jealous if You Want! 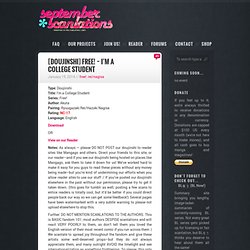 Series: Free! Author/Circle: nightlightPairing: Hazuki Nagisa/Ryuugazaki ReiRating: PGLanguage: English Download View on our Reader Notes: As always — please DO NOT POST our doujinshi to reader sites like Mangago and others. Doujinshi from September Scanlations. Free! Dj - Splash Honey! (Yaoi) manga. Summary Haru said to Makoto that it's okay to *do* it so they went to Haru's house fast. 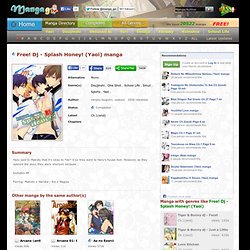 However, as they opened the door, they were shocked because... Includes 4P Pairing: Makoto x Haruka | Rei x Nagisa Other manga by the same author(s) The anthology features works by mangaka from "Ward" and "Comic Zero-Sum". Marriage marine. The start of our romance. Smile at fatalism. You're good for nothing, fool. Captain's blog stuff. Five things shaking my faith in Doctor Who. My friend and I got into a really interesting conversation about faith yesterday while I whined about scarily-religious people constantly needing to validate and prove their religion to non-believers. 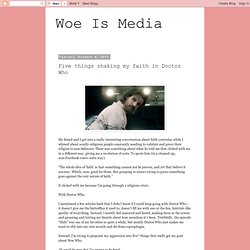 There was something about what he told me that clicked with me in a different way, giving me a revelation of sorts. To quote him (in a cleaned-up, non-Facebook convo sorta way): “The whole idea of ‘faith’ is that something cannot not be proven, and yet they believe it anyway. Which, sure, good for them. But grasping at straws trying to prove something goes against the very nature of faith.” It clicked with me because I’m going through a religious crisis. U lil bitch. Don't :) touch :) me :) I CANT DO THIS I CAN T D E A L. Torchwood meta: The Lost Files. (All three radio plays, but mostly The House of the Dead.) Before we start - icon is in honour of sam_storyteller’s Trying to Communicate, because alien LOLcats stand for everything that was right and good about old! 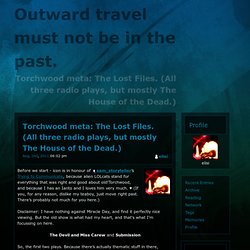 Torchwood, and because I has an Ianto and I loves him very much. ♥ (If you, for any reason, dislike my teaboy, just move right past. There’s probably not much for you here.) Disclaimer: I have nothing against Miracle Day, and find it perfectly nice viewing. But the old show is what had my heart, and that's what I'm focussing on here. Home - Why We Ship KuroFai. Welcome to the ultimate KuroFai tribute website. 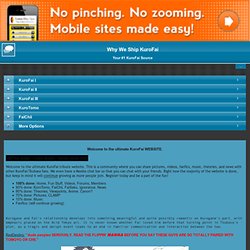 This is a community where you can share pictures, videos, fanfics, music, theories, and news with other KuroFai/Tsubasa fans. We even have a Meebo chat bar so that you can chat with your friends. Right now the majority of the website is done, but keep in mind it will continue growing as more people join. Gay hell.