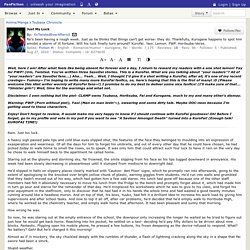 After what feels like being absent for forever and a day, I return to reward my readers with a one shot lemon! Yay for PWP! (Um, Twisted. You've written three SasoDei stories. This is a KuroFai. Disclaimer: I own nothing but the plot- CLAMP owns Tsubasa, Horitsuba, Fai and Kurogane, much to my and many other's dismay. Warning: PWP (Porn without plot), Yaoi (Man on man lovin'~), swearing and some dirty talk. Enjoy! Rain. A heavy sigh passed pale lips and cold blue eyes slipped shut, the features of the face they belonged to moulding into an expression of exasperation and weariness.

Staring out at the gloomy and storming sky, Fai frowned, the smile slipping from his face as his lips tugged downward in annoyance. He'd slipped in halls on slippery places clearly marked with 'Caution- Wet Floor' signs, which he promptly ran into afterwards, going to the extent of apologising to the knocked over bright yellow chunk of plastic, earning giggles from students. How wrong he was. Fanfic: The Dress Makes the Man Ch 3, Tsubasa Chronicle. Title: RoleplayRating: NC-17Warnings: Sex, PWPSummary:Sequel to 'Dress Makes the Man'. 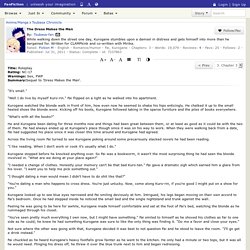 "It's small. " "Well I do live by myself Kuro-rin. " Fai flipped on a light as he walked into his apartment. Kurogane watched the blonde walk in front of him, how even now he seemed to shake his hips enticingly. He chalked it up to the small heeled shoes the blonde wore. "What's with all the books? " He and Kurogane been dating for three months now and things had been great between them, or at least as good as it could be with the two of them. Across the living room Fai turned to see Kurogane poking around some precariously stacked novels he had been reading. "I like reading. Kurogane stopped before he knocked anything over. 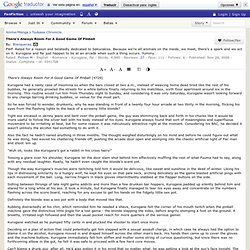 This routine would run him from Thursday night to Sunday, and considering it was only Saturday, Kurogane wasn't looking forward to any change barring drinking buddies, or venue for the most part. So he was forced to wonder, drunkenly, why he was standing in front of a twenty four hour arcade at two thirty in the morning, flicking his eyes from the flashing lights to the back of a scrawny little blonde? Tight ass encased in skinny jeans and bent over the pinball game, the guy was shimmying back and forth in his chucks like it would be more useful to follow the silver ball with his body instead of his eyes. Also the fact he hadn't nailed anything in three months. Fanfic: Cold Hands, Tsubasa Chronicle. 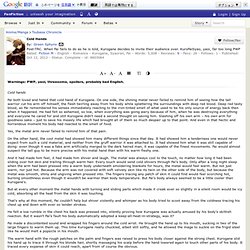 Cold hands Fai both loved and hated that cold hand of Kurogane. On one side, the shining metal never failed to remind him of seeing how the tall warrior cut his arm off himself, the flesh twirling away from his body while splattering the surroundings with deep red blood. Deep red tasty blood, as Fai remembered his senses immediately reacting to the iron-tinted smell of what used to be his only source of energy back then when it happened. He had felt so ashamed, so low, when everything was going awry because of him, when he was destroying everything and everyone he cared for and still Kurogane didn't need a second thought on saving him. Yes, the metal arm never failed to remind him of that pain. On the other hand, the cool metal had showed him many different things since that day. And it had made him feel, it had made him shiver and laugh. Fai made a discontented sound and wrapped his fingers around the cold wrist.