Your JAW will drop when you watch this video! *THATS JUST CRAZY* If You Dont Believe in UFOs? Watch This! - Recent Mass UFO Sightings 2011. Alien attacks police officer CNN BREAKING NEWS. Cell phone spotted in silent film from 1928 [Must See] Double Your Internet Speed for Free. WHY COPS FEAR-SHTF. How High Can We Build? Will We Ever Run Out of New Music?

Obama: The Man Who Fooled The World (Full Length Part One) 2012 Something Is Going On! Banker left Speechless by Irish Journalist. 9-11 The Most Important Video Ever What Happened to WTC Building 7. If This Does Not Get Thru To You; Nothing Will!!! Obama 'America's 1st Unconstitutional President!' Ben Swann interviews President Obama (NDAA, Kill List, Syria, Afghanistan) HIKING THE WEST COAST TRAIL. Clarke and Dawe on the royal wedding. Australian idiot talks about whale death FUNNY. Clarke and Dawe - Sample Study Does Little to Ease Public Concern. Clarke and Dawe - Please Do Not Attempt This at Home. Clarke & Dawe on the Osama bin Laden Raid. 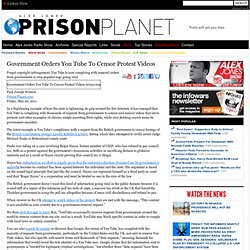 The latest example is You Tube’s compliance with a request from the British government to censor footage of the British Constitution Group’s Lawful Rebellion protest, during which they attempted to civilly arrest Judge Michael Peake at Birkenhead county court. Hayes has embarked on an effort to legally prove that the enforced collection of council tax by government is unlawful because no contract has been agreed between the individual and the state. Fuck you" Sign language performance. Trampoline Accidents Montage. Inspired Bicycles - Danny MacAskill April 2009.