The Agency. Whey To Transform: Your Expert Guide To The Premier Muscle-Building Protein. Whey protein powder is as close as it gets to a "required supplement" for anyone looking to build muscle, gain a performance edge, drop body fat, or enhance overall health and wellness. 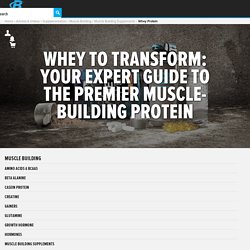 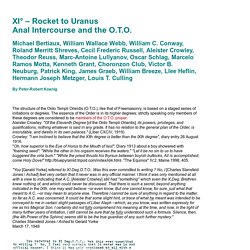 Neuburg [ From Peter-R. Burn After Reading, by Gabriel Thompson. Auschwitz survivors - 70 years on. Eighty-nine-year-old Auschwitz survivor Jadwiga Bogucka, pictured above holding a photograph of herself at the time, was 19 when she and her mother were sent from their house to a camp in the Polish city of Pruszkow and then by train to Auschwitz. 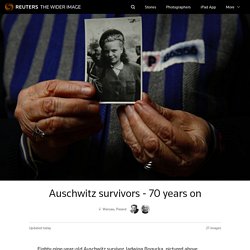 About 1.5 million people, most of them Jews, were killed at the Nazi camp which has became a symbol of the horrors of the Holocaust and World War Two, which ravaged Europe. Bogucka and her mother were among about 200,000 inmates who survived Auschwitz, liberated by Soviet Red Army troops on January 27, 1945. German forces occupying Poland set up Auschwitz on an isolated 40 sq km site in southern Poland in 1940 as a labour camp for Polish prisoners, gradually expanding it into a vast labour and death camp. King Tut's Burial Mask Has Been "Irreversibly Damaged" Nicholas Roerich and The Chintamani Stone - A Holy Grail from Sirius? By Mark Amaru Pinkham for Four Corners Magazine from FourCornersMagazine Website With the current massive outpouring of information regarding the fabled Holy Grail (or Grails) it is impossible to ignore what may be the very first Holy Grail on Earth, the Chintamani Stone, the “Treasure of the World.” 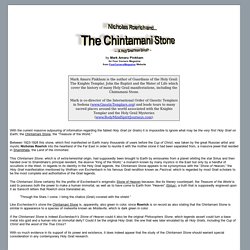 Between 1923-1928 this stone, which first manifested on Earth many thousands of years before the Cup of Christ, was taken by the great Russian artist and mystic Nicholas Roerich into the heartland of the Far East in order to reunite it with the mother stone it had been separated from, a massive jewel that resided in Shambhala, the Land of the Immortals. Islam Is Privilege  On Wednesday, Charlie Hebdo, a satirical French newspaper was attacked by two jihadists. 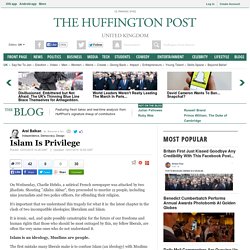 Shouting "Allahu Akbar", they proceeded to murder 12 people, including nine journalists and two police officers, for offending their religion. It's important that we understand this tragedy for what it is: the latest chapter in the clash of two incompatible ideologies; liberalism and Islam. It is ironic, sad, and quite possibly catastrophic for the future of our freedoms and human rights that those who should be most outraged by this, my fellow liberals, are often the very same ones who do not understand it. Meshcheryakov.pdf. North Korean defector details ′human experiments′ Im Cheon-yong says that witnessing mentally and physically handicapped children being used in chemical weapons tests carried out by the North Korean military was the last straw. 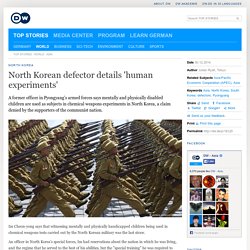 An officer in North Korea's special forces, Im had reservations about the nation in which he was living, and the regime that he served to the best of his abilities, but the "special training" he was required to undergo at a military academy in North Pyongan Province for the regime's elite troops helped to convince him that he needed to defect. "If you want to graduate from this academy, you need to learn how to confuse the enemy without revealing your own forces, how to carry out assassinations, how to use chemical weapons and so on," he told DW. 'The regime does this because it insists to their people that North Korea is heaven on Earth,' says Shigemura "And then we have what they call 'field learning'. For the biological and chemical warfare tests, we needed 'objects'," he added. Jean Thompson’s ‘The Witch: And Other Tales Re-told’ Photo The practice of retelling fairy tales in the form of literary fiction is, if not quite hallowed, certainly established. 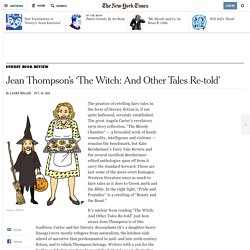 The great Angela Carter’s revelatory 1979 story collection, “The Bloody Chamber” — a brocaded work of heady sensuality, intelligence and violence — remains the benchmark, but Kate Bernheimer’s Fairy Tale Review and the several excellent Bernheimer-edited anthologies spun off from it carry the standard forward. Those are just some of the more overt homages; Western literature owes as much to fairy tales as it does to Greek myth and the Bible. In the right light, “Pride and Prejudice” is a retelling of “Beauty and the Beast.” Why You Should Know Emanuel Swedenborg  The 18th century Swedish scientist, traveller, statesman, and religious philosopher Emanuel Swedenborg is one of the most fascinating and least understood figures in western history. 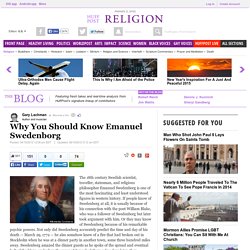 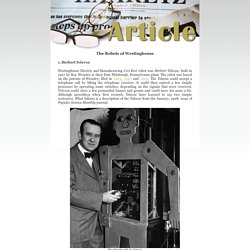 Herbert Televox. What Extreme Isolation Does to Your Mind. The experiences of prisoners held in solitary confinement—the despair, the disorientation, the hallucinations—are well documented, but laboratory observations of isolated human subjects and the profound effects of extreme confinement are exceedingly rare, in part because such experiments might have trouble getting past institutional review boards these days. 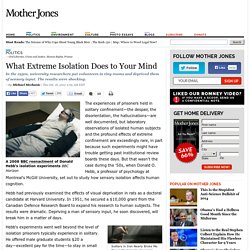 But that wasn't the case during the '50s, when Donald O. Hebb, a professor of psychology at Montreal's McGill University, set out to study how sensory isolation affects human cognition. Hebb had previously examined the effects of visual deprivation in rats as a doctoral candidate at Harvard University. In 1951, he secured a $10,000 grant from the Canadian Defence Research Board to expand his research to human subjects. The results were dramatic. Psychic driving. Psychic driving was a psychiatric procedure in which patients were subjected to a continuously repeated audio message on a looped tape to alter their behaviour. In psychic driving, patients were often exposed to hundreds of thousands of repetitions of a single statement over the course of their treatment. They were also concurrently administered muscular paralytic drugs such as curare to subdue them for the purposes of exposure to the looped message(s).

A hostage to hallucination. I’ve just found a morbidly fascinating 1984 study on hallucinations in hostages and kidnap victims. The paper is from the Journal of Nervous and Mental Disease and contains case studies of people who have been held captive by terrorists, kidnappers, rapists, robbers, enemy troops and, er… UFOs. The Pathology of Boredom - The+Pathology+of+Boredom+(Heron,+1956).pdf. Richard Preston. Our privacy promise The New Yorker's Strongbox is designed to let you communicate with our writers and editors with greater anonymity and security than afforded by conventional e-mail.

This provides a higher level of security and anonymity in your communication with us than afforded by standard e-mail or unencrypted Web forms. 9618142634_783ff65882_k.jpg (JPEG Image, 1488 × 2048 pixels) - Scaled (48%) Rechts Gegen Rechts – Der Film zum unfreiwilligsten Spendenlauf Deutschlands. Our culture has an abnormal fascination with death. March 27, 2005|By Louis Rene Beres, professor of political science at Purdue University. MCKAMEY MANOR 2014 (The Manor Wins Again) Citizens' Nuclear Information Center. NHK (Japan Broadcasting Corporation) has produced an important contribution to the English literature on the criticality accident, which occurred at the JCO nuclear fuel processing facility in Tokaimura, about 110 km north-east of Tokyo.

The September 30, 1999 accident killed two workers and destroyed the "nuclear safety myth" propagated by the Japanese government and the nuclear industry. A Slow Death: 83 Days of Radiation Sickness is a translation of a Japanese book based on an NHK television documentary. The documentary was aired in May 2001 and subsequently won the Gold Nymph Award at the 42nd Monte Carlo Television Festival in 2001. It gives only a rudimentary account of the accident itself, choosing instead to focus on the medical treatment and slow death of one of the workers involved.

Hisashi Ouchi died almost 3 months after receiving a massive radiation dose of about 20 Sieverts. My grandfather was a nose gunner in the Air Force during WWII and wore this jacket during the invasion of Iwo Jima. List of common misconceptions. From Wikipedia, the free encyclopedia. List of common misconceptions. Faces of Meth. Game of Thrones, Season 4 – VFX making of reel.

Badass Presidents. Las 40 Fotografías Más Impactantes Que He Visto. Te Dejarán Sin Palabras. Échale una mirada a estas fotos, algunas son de impresionantes momentos históricos, mientras otras, son simplemente sobrecogedoras. The Box of Crazy. Grant Morrison - Disinfo.Con Lecture - Magick. Wait but why: 20 Things I Learned While I Was in North Korea. Well that was weird. I was only in North Korea for five days, but that was more than enough to make it clear that North Korea is every bit as weird as I always thought it was. TT_Competitiveness_Report_2013. World's unfriendliest nations for tourists? Bolivia was ranked the unfriendliest country for travelers in the World Economic Forum report. The category 'Attitude of population toward foreign visitors' is just one of many used to rank countries in the new Travel and Tourism Competitive Index. Bolivia ranked 110th out of 140 countries in the overall index results. On the positive side, it performed well in price competitiveness due mainly to low hotel accommodation costs.

The Billion-Dollar Barrel of LSD, and Other Insanities of the U.S. Army's Cold War Drug Experiments. Photo Album. Beautiful poop. Lifehacker Australia, tips and downloads to help you at work and play. Breaking The Taboo - Film. Dr. Dennis McKenna - The Death Culture (1 of 2)