Hestia14 - Top!Sherlock/Bottom!John Fanfic List. On Your Knees - myswordfishmind - Sherlock. Full - thirdbird - Sherlock. Main Content <p id="javascript-warning"> While we&#x27;ve done our best to make the core functionality of this site accessible without javascript, it will work better with it enabled. 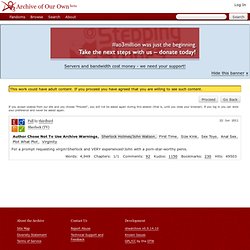 Please consider turning it on! </p> Archive of Our Own beta Log In Site Navigation Servers and bandwidth cost money - we need your support! De Facto - pennydreadful - Sherlock. Having a sexual relationship with Sherlock—and sweet weeping Jesus, was it ever strange to say that—was nothing like John expected. 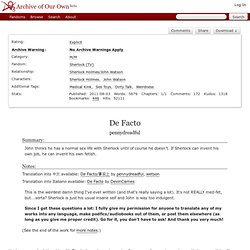 He wasn't sure what he expected, if he'd actually expected anything, but whatever he might have envisioned beforehand he discovered in reality wasn't even close to fact. First of all, Sherlock being a sexual creature was enough to have to wrap one's mind around—John assumed sex was something he didn't even know about, like the earth going around the sun. Sherlock had quickly proven this wasn't so, that he knew about and liked sex just as much as the next able-bodied thirty-something man, thank you very much. Secondly, John assumed if Sherlock did engage in sex it would be awkward, frustrating, and/or mentally scarring for his partner. In fact, sex with Sherlock was the exact opposite of all those things.

Of course, this turned out to be just a ruse. Dress Sense - PrettyArbitrary - Sherlock (TV), Sherlock Holmes & Related Fandoms. "When you said you wanted to dress me, Sherlock, I thought you meant in the morning. 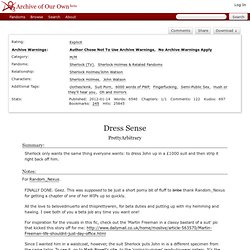 Not…" John gestured hopelessly around the expensive tailor's shop he'd been led to like a sheep to slaughter. "You deliberately misled me! " "You predictably misconstrued! " Sherlock kept John tucked up against him with a grip on his belt, his knuckles pressing into the small of John's back. He seemed convinced that John would try to make a break for it the minute he let go...which was fair enough, since John was keeping a weather eye out for escape routes.

John was open to pretty much any kind of oddity within the walls of 221b. Except that he had, in the end. Which didn't mean John had to be happy about it. "Alright, yes! LT's Den Of Great Folly - Zingiber - John/Sherlock - NC-17 - (1/1) Title: ZingiberRating: NC-17Fandom: Sherlock BBCGenre: PWPPairing: John/SherlockDisclaimer: Conan Doyle would be giving this a very funny look if he wasn't already busy spinning in his graveSummary: The boredom, John knows, is always the hardest partNotes: A vague sort of companion to Radiance and Panegyrical, though it's not necessary to have read them first. 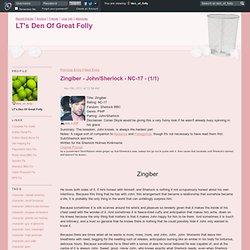 Sub! Sherlock and kink.Written for the Sherlock Holmes KinkmemeOriginal PromptAs a punishment Dom! A Taste of Murder - Chapter 1 - pennydreadful - Sherlock. Chapter Text The whole thing started, as most things in their life, with a murder; a man, late twenties-early thirties, clean-cut, neatly dressed, sprawled in an alleyway with a bullet hole through the top of his head. 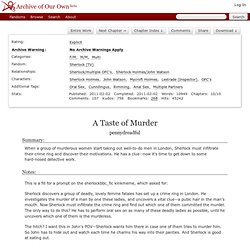 "His name is Randy Decker," Lestrade read from his notepad. "Father owns a large share in Tesco, mother hosts a talk show on the telly. He fits with the others. It's got to be those women again. " John watched Sherlock as he knelt next to the body. Mirith Griffin's Mind Shack. Transport - thisprettywren - Sherlock. Everything else is just transport. 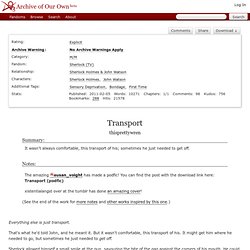 That's what he'd told John, and he meant it. But it wasn't comfortable, this transport of his. It might get him where he needed to go, but sometimes he just needed to get off. Sherlock allowed himself a small smile at the pun, savouring the bite of the gag against the corners of his mouth. He could feel himself tensing. Sometimes he couldn't stop himself. He ought to find it humiliating. Just the slow in-out of breath through his nose and absence of the need to analyse, to choose, the sweet knowledge that there was nothing--nothing--in his world except what was given. Undercurrents. Title: UndercurrentsFandom: SherlockPairing: John/SherlockRating: RWarnings: Slight crime scene fetish, masturbation, possibly disturbing themes.Word Count: 3000Disclaimer: In no way mine, or anything to do with me, I own nothing.Summary: "There, that's it, perfect, shut your eyes and don't move - and don't speak. 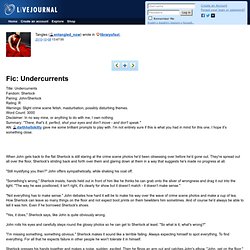 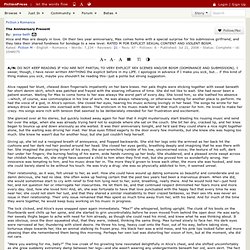 I swear, though, I have never written ANYTHING the explicit before in my LIFE. I apologize in advance if I make you sick, but... if this kind of thing makes you sick, maybe you shouldn't be reading this--just a polite but strong suggestion. Alice rapped her blunt, chewed down fingernails impatiently on her bare knees. Her pale thighs were sticking together with sweat beneath her short denim skirt, which was patched and frayed with the wearing influence of time. She did not like to wait. She glanced over at his stereo, but quickly looked away again for fear that it might mysteriously start blasting his rousing music and send her over the edge, when she was already trying hard not to explode where she sat on the couch. Payback on the Road, a romance fiction. A/N: Oh boy. 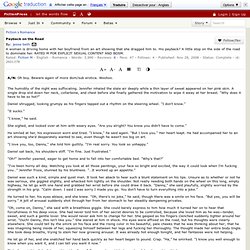 Beware again of more dom/sub erotica. Woohoo. The humidity of the night was suffocating. Jennifer inhaled the stale air deeply while a thin layer of sweat appeared on her pink skin. A single drop slid down her neck, collarbone, and chest before she finally gathered the motivation to wipe it away at her breast. Daniel shrugged, looking grumpy as his fingers tapped out a rhythm on the steering wheel.

Heaven is on Fire, a romance fiction. "Fuck. 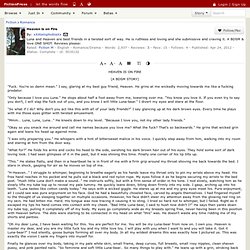 You're so damn mean. " I say, glaring at my best guy friend, Heaven. He grins at me wickedly moving towards me like a fucking predator. Constant Battle, a spartacus: blood and sand fanfic. Their bodies move in perfect partnership; back and forth. Strong, well trained muscles move under shining sweat soaked skin, glinting in the heat of the sun and pushing each other to the extremes of patience and skill.

The passionate white heat of their loathing is clear to the most unobservant eye. A foot slips and razor sharp steel bites in to flesh; crimson blood flows across the burnished bronze skin and the crowd roars in frenzied glee at the violence arranged for their entertainment. The only disappointment: the fact that they will not see one of the men in the arena die today. Spartacus gazes at Crixus through sweat clouded vision and enjoys the sight of blood dripping from his chest. The two men engage each other again; Spartacus' dual swords creating fireworks from the glints of the sun as Crixus uses his blade and shield in equal measure to try and break through the constant assault from the advancing blades.

Demonstration, a spartacus: blood and sand fanfic. Demonstration What if Quintilius did not feel the effects of the too wine much and requested a more personal demonstration from the champion. Warnings: Slash (in detail), Mature Characters: Gannicus, Quintilius, Quintilius' personal slave Note: GOTA episode 2: Missio, AU in which Melitta will hopefully live longer. Special thanks to my beta, IndigoNightandRayneStorm for correcting my mistakes and offering delightful suggestions. Mercy, a spartacus: blood and sand fanfic. The sanctuary was quiet. The rebellion rested under the blanket of night, every last free man and woman's breathing heavy in sleep. Please Forgive Me - Rehfan - Sherlock (TV), Sherlock Holmes & Related Fandoms.

Dear me, Mr. Holmes!, Sherlock Fic Rec List. In autumn, when the leaves are brown, take pen and ink and write it down... - L'instinct suffit. Top!loki and bottom!tony ficlist.

I've saved a photo of Tom Hiddleston standing thigh deep in water. He is soaked from mid-riff down in the tightest jeans I've ever seen. No head shot nor shoulders, but it looks like his thighs and his hands. Does anyone know what picture I'm speaking of? I'd love to see to the front of him and that beautiful face. The ass is a dream, sorry, but it's so perfect. – olddarling