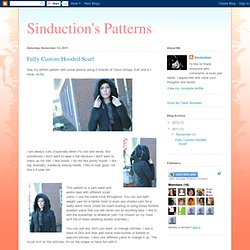 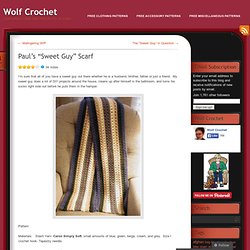 My sweet guy does a lot of DIY projects around the house, cleans up after himself in the bathroom, and turns his socks right side out before he puts them in the hamper. Pattern Materials: Stash Yarn: Caron Simply Soft, small amounts of blue, green, beige, cream, and grey. Size I crochet hook. Tapestry needle Measurements: 70″ X 8 1/2 “ This pattern is made by combining 3 pattern rows of each color until you get to the middle, 5 pattern rows of grey, and then reversing the order of the colors to the other edge.

It’s a simple pattern featuring single crochet spaced apart by single chains. The crochet pattern creates a sleek, solid scarf that isn’t too heavy. I’ve used a combination of red, ivory tweed and grey yarn to create a modern scarf for a man or woman. Since I tend to be someone who can easily start and stop projects, I worried that I might not be able to produce all five scarves as promised within the project deadline.

However, I’ve been enjoying the crochet so much that I’m ahead of schedule (and already thinking ahead to future projects!). This scarf came together quickly one morning while I listened to the news on TV and occasionally glanced at the rainy day outside. Free Knitting Pattern L10479 Varsity Stripe Hat And Scarf. Bev's Knit-Your-Bit scarf. Bev's "Knit-Your- Bit" Scarf (formerly Special Olympics scarf) pattern by Beverly A. 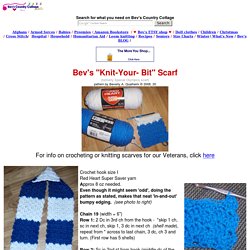 Row 2: Sc in 2nd st from hook (middle dc of the shell) - *skip 1 st, 3 dc in next (forms shell), skip 1 st, sc in middle of shell, repeat from * across to shell-- sc in middle of shell, ch 3 and turn. (4 shells) Scarf to left: colors were changed every 10 rows but you can change colors however often you wish. Mailing Scarves: * Include care and washing instructions. The National World War II Museum Knit Your Bit Campaign 945 Magazine Street New Orleans, LA 70130. Shala_beads: Mike's scarf. I finished it last night while we finished watching Tin Man. 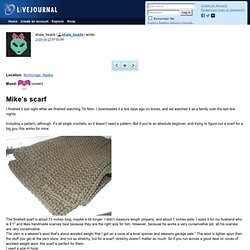 I downloaded it a few days ago on itunes, and we watched it as a family over the last few nights. Including a pattern, although, it's all single crochets, so it doesn't need a pattern. But if you're an absolute beginner, and trying to figure out a scarf for a big guy, this works for mine. The finished scarf is about 73 inches long, maybe a bit longer. I didn't measure length properly, and about 7 inches wide. *Yes. Pattern: Dragon. It’s the Year of the Dragon this year! 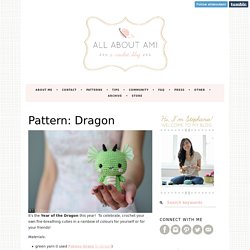 Tiny Whale. © June Gilbank 2009 This little whale is the perfect size to sit in the palm of your hand! 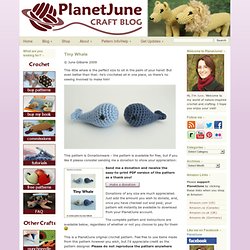 But even better than that: he’s crocheted all in one piece, so there’s no sewing involved to make him! Micro Miniature Kiwi Bird. Free Patterns by H: Stegosaurus Amigurumi. MATERIALS:Lion Brand Jiffy, 1 skein (A) "Apple Green" & partial skeins (B) "Grass Green" & (C) "Dark Grey Heather" size I or J crochet hook 9mm black safety eyes (or black yarn) stuffing yarn needle Some stitches/abbreviations used in this pattern: Dec1 = Insert hook in next stitch and pull up a loop (2 loops on hook). 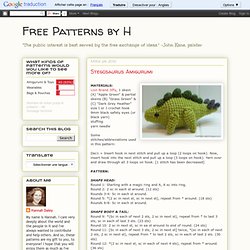 Now, insert hook into the next stitch and pull up a loop (3 loops on hook). Yarn over and draw through all 3 loops on hook. [1 stitch has been decreased] SHAPE HEAD: Round 1: Starting with a magic ring and A, 6 sc into ring. SPIKES: (Sew the spikes to the top of the body segment in the following order: small spike, medium spike, large spike, large spike, medium spike, small spike.) Pokemon Look-Alike Pikachu. Here is the pattern and pics for the Pikachu (pokemon) look-alike I made for my son. Pikachu-guy designed by Elizabeth Mareno 10/20/06 Materials: F hook, sport weight yarn (altho i did this with worsted), stuffing and needle.

**Do not join rounds unless indicated** Top Feet: (Make 2)Row1: ch 2, 6 sc in 2nd ch from hookRow2: 2sc in each sc.Row3: Back Loop Only, sc in each aroundRow4: Both Loops, sc in each sc around.Finish off. Sew to front of body using picture as reference. Espeon « AH! Creations. For several months now I’ve been asked by my fiancé (and amigurumi felter) Beau to make a couple of our favorite Pokemon: Umbreon and Espeon. But without a pattern those projects got pushed to the back of the queue in favor of others. Recently, another crocheter whose patterns are very good, and whom I’ve made amigurumis from before, posted her own pattern for Umbreon. A week later we had our own Umbreon and were pretty pleased. That is until I suggested to Beau that it might be possible for me to alter her pattern for Umbreon a little to make Espeon. Since Espeon is his favorite Pokemon, he immediately jumped on board for that idea and I’m pleased to say I think Espeon turned out very well.

To help make the tail more posable and like Umbreon’s from pictures we’re going to put a thin wire inside it. These pictures aren’t the best, but it is the best I can do at night. JIGGLYPUFF with pattern. This is the Jigglypuff I made for the kids. 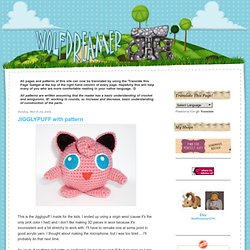 Charizard « AH! Creations. Beau has talked about me making a Charizard for a long time now. 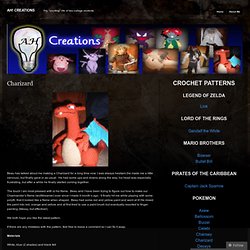 I was always hesitant (he made me a little nervous), but finally gave in as usual. He had some ups and downs along the way, his head was especially frustrating, but after a while he finally started coming together. The touch I am most pleased with is his flame. POKEBALL. I made a bunch of these pokeballs for the kids starting way back in the mid 90's ... when they were little. They'd lose one (or the dogs would chew them up) so I'd make more. Even at their ages they still love to play with these things :) As always, if something isn't right please let me know so that I can fix it as soon as possible. Materials: WW yarn in red, white and black F and G hook Fiberfill Yarn needle Sewing needle and thread in white and black. Louie's Loops: Holy free pattern, Batman!!

This Friday yet another awesome superhero movie of this summer comes out, The Dark Knight Rises, and you know I'm here to make an equally awesome pattern to commemorate it! So some of you may know the little bat pattern I posted last year, well I used that pattern with a few differences to make today's free pattern of a simple Batman Logo, but that's not all... Iron man's not the only one with some sweet gloves, and do to the popularity of my Iron Man Fingerless Mittens posted last month, I decided to make some Batman Ninja versions of them! You can get the Gauntlet pattern for $3 on Ravelry, Craftsy, or Etsy, or by simply clicking -->HERE<--