AddOn Studio for World of Warcraft - Home. AddOn programming tutorial/Introduction - WoWWiki - Your guide to the World of Warcraft. ← WoW AddOn Square One Edit You have to start someplace, and the traditional place to start is with "Hello, World". 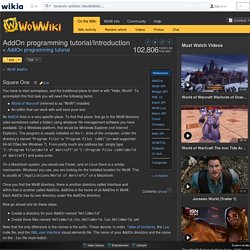 UI XML tutorial - WoWWiki - Your guide to the World of Warcraft. This is a tutorial and reference for using WoW UI XML. 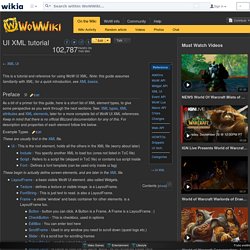 Note: this guide assumes familiarity with XML; for a quick introduction, see XML basics. Preface Edit As a bit of a primer for this guide, here is a short list of XML element types, to give some perspective as you work through the next sections. See: XML types, XML attributes and XML elements, later for a more complete list of WoW UI XML references. TOC format - WoWWiki - Your guide to the World of Warcraft. 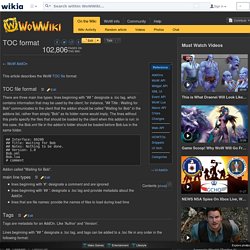 TOC file format Edit There are three main line types: lines beginning with "## " designate a .toc tag, which contains information that may be used by the client; for instance, "## Title : Waiting for Bob" communicates to the client that the addon should be called "Waiting for Bob" in the addons list, rather than simply "Bob" as its folder name would imply. The lines without this prefix specify the files that should be loaded by the client when this addon is run: in this case, the Bob.xml file in the addon's folder should be loaded before Bob.lua in the same folder. Getting started with writing AddOns - WoWWiki - Your guide to the World of Warcraft.

← WoW AddOn The idea of picking up any programming language can be daunting, and when you have to tie your program into someone else's APIs it can be nearly overwhelming. 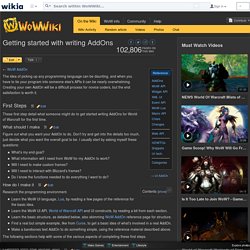 Creating your own AddOn will be a difficult process for novice coders, but the end satisfaction is worth it. First Steps Edit These first step detail what someone might do to get started writing AddOns for World of Warcraft for the first time. Game Development by Ellison Leão. JKO, JKA Full Source Code Released!! - Site news - Articles - Home - JKHub. Making Games with Construct2.

It's a real treat! 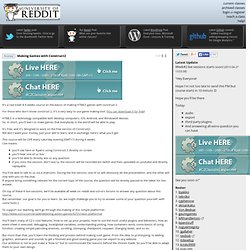 A 4 weeks course on the basics of making HTML5 games with construct 2. For those who don't know construct 2, it's a very easy to use game making tool. (You can download it for free) HTML5 is a technology compatible with desktop computers, iOS, Android, and Windows8 devices. So, in short, you'll learn to make games that everybody in the world will be able to play. It's free, and it's designed to work on the free version of Construct2.

This course will be LIVE every saturday evening (GMT+1) during 4 weeks. You'll see Yann or Kyatric using Construct 2 directly on screenyou'll hear one of us liveyou'll be able to directly ask us any questionif you miss the session, don't worry, the session will be recorded (on twitch and then uploaded on youtube) and directly replayable. [ Unity3D ] ビデオゲームの開発. Anyone Can Learn to Make a Game by Richard Hart. Maybe you've just come up with a great new idea. 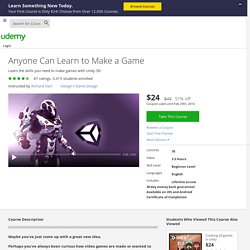 GameMaker for Windows. Make Games - Making it in Indie Games: Starter Guide. Modern OpenGL resources round up. With the fundamental shift from a fixed to a programmable pipeline, finding modern style OpenGL resources can prove a bit tricky. 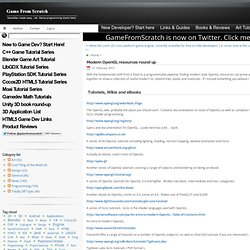 Therefore I have put this page together to show a collection of useful modern GL related links, books and materials. If I missed something you believe I should add, please let me know! Tutorials, Wikis and eBooks The OpenGL wiki, probably the place you should start. Spacescape - Space Skybox Tool. Petrocket wrote: roimatola wrote:Well, now i tried it in two different computers and the file keeps arriving corrupted :S This really looks cool, i would love to give it a try.. 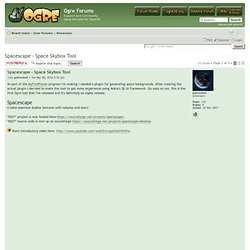 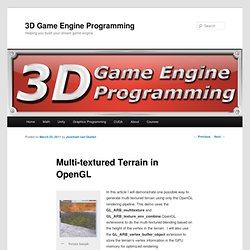 This demo uses the GL_ARB_multitexture and GL_ARB_texture_env_combine OpenGL extensions to do the multi-textured blending based on the height of the vertex in the terrain. I will also use the GL_ARB_vertex_buffer_object extension to store the terrain’s vertex information in the GPU memory for optimized rendering. OpenGL:Tutorials:3D Textures. An OpenGL 3d Texturing Tutorial This tutorial is intended to demonstrate 3-dimensional texturing (not to be confused with simply texturing a 3d object) in OpenGL and familiarize the reader with its use. 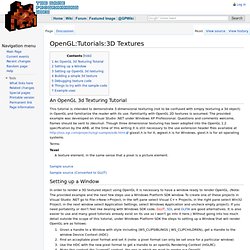 Familiarity with OpenGL 2D textures is assumed. The provided example was developed on Visual Studio .NET under Windows XP Professional. Questions and comments welcome, flames should be sent to /dev/null. Though three dimensional texturing has been adopted into the OpenGL 1.2 specification by the ARB, at the time of this writing it is still necessary to the use extension header files available at glxext.h is for X, wglext.h is for Windows, glext.h is for all operating systems.

Terms: Texel A texture element, in the same sense that a pixel is a picture element. Sample source. Computer Science With Python and Pygame. To move beyond the simplistic shapes offered by drawing circles and rectangles, our programs need the ability to work with bitmapped graphics. Bitmapped graphics can be photos or images created and saved from a drawing program.

In this lesson, we're going to scrap the scene from our previous lessons and make a new one. We'll make a box-shaped object, with the top and bottom removed. Look at the source code.