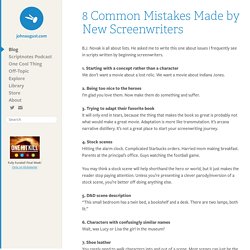 Novak is all about lists. He asked me to write this one about issues I frequently see in scripts written by beginning screenwriters. 1. Starting with a concept rather than a character We don’t want a movie about a lost relic. We want a movie about Indiana Jones. 2. 3. 4. You may think a stock scene will help shorthand the hero or world, but it just makes the reader stop paying attention. Script Logic: The Syllogism. David Mamet’s Master Class Memo to the Writers of The Unit. CBS's drama The Unit, about the lives of the highly trained members of a top-secret military division, was canceled last year, but a memo to its writing staff from its executive producer David Mamet has just surfaced online. 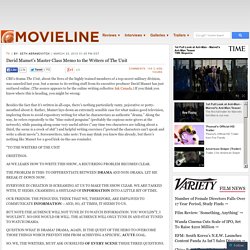 (The source appears to be the online writing collective Ink Canada.) If you think you know where this is heading, you might be wrong: Besides the fact that it's written in all-caps, there's nothing particularly ranty, pejorative or potty-mouthed about it. Hollywood's 25 Most Powerful Authors. 10 Famous Screenwriters’ Surprising First Writing Gigs. 10. 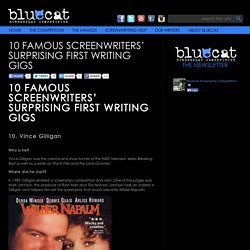 Vince Gilligan Who is he? Vince Gilligan was the creator and show runner of the AMC television series Breaking Bad as well as a writer on The X-Files and The Lone Gunmen. Where did he start? In 1989, Gilligan entered a screenplay competition and won. The film, released in 1993, was a “spectacular flop.” Flowchart - What Will Happen to Your Screenplay? What does it take to get your screenplay sold? 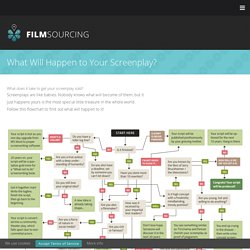 Screenplays are like babies. Nobody knows what will become of them, but it just happens yours is the most special little treasure in the whole world. Follow this flowchart to find out what will happen to it! Avoid using "thought" verbs. I love Chuck Palahniuk’s advice to writers: From this point forward – at least for the next half year – you may not use “thought” verbs. 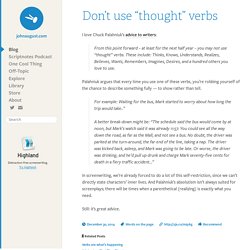 These include: Thinks, Knows, Understands, Realizes, Believes, Wants, Remembers, Imagines, Desires, and a hundred others you love to use. Palahniuk argues that every time you use one of these verbs, you’re robbing yourself of the chance to describe something fully — to show rather than tell. Pixar’s 22 Rules of Storytelling (with movie stills)! Former Pixar story artist Emma Coats tweeted a series of story guidelines in 2011 which she learned from her colleagues at Pixar. 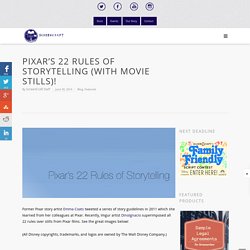 Recently, Imgur artist DinoIgnacio superimposed all 22 rules over stills from Pixar films. See the great images below! (All Disney copyrights, trademarks, and logos are owned by The Walt Disney Company.) #1: You admire a character for trying more than for their successes. #2: You gotta keep in mind what’s interesting to you as an audience, not what’s fun to do as a writer. . #3: Trying for theme is important, but you won’t see what the story is actually about til you’re at the end of it. The Winterleys na Twitterze: "Dan Gilroy lays down a great character description in Nightcrawler. #screenwriting #scriptchat...

Character Types. The Art of Screenwriting No. 1, Billy Wilder. Billy Wilder, one of American cinema’s premiere writer-directors, has always maintained that movies are “authored,” and has always felt that much of a film’s direction ideally should take place in the writing. 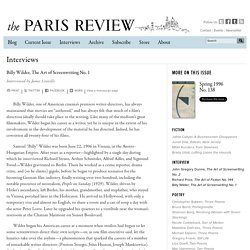 Like many of the medium’s great filmmakers, Wilder began his career as a writer, yet he is unique in the extent of his involvement in the development of the material he has directed. Indeed, he has cowritten all twenty-four of his films. Samuel “Billy” Wilder was born June 22, 1906 in Vienna, in the Austro-Hungarian Empire. After years as a reporter—highlighted by a single day during which he interviewed Richard Straus, Arthur Schnitzler, Alfred Adler, and Sigmund Freud—Wilder gravitated to Berlin. There he worked as a crime reporter, drama critic, and (so he claims) gigolo, before he began to produce scenarios for the booming German film industry, finally writing over two hundred, including the notable precursor of neorealism, People on Sunday (1929). Discovering the Great Movie Idea for Your Next Screenplay. I am lucky. 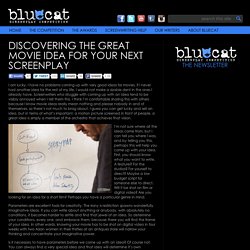 I have no problems coming up with very good ideas for movies. If I never had another idea for the rest of my life, I would not make a sizable dent in the ones I already have. Screenwriters who struggle with coming up with an idea tend to be visibly annoyed when I tell them this. I think I’m comfortable sharing this with others because I know movie ideas really mean nothing and please nobody in and of themselves, so there’s not much to brag about. I guess you can get lucky and sell an idea, but in terms of what’s important, a motion picture screened in front of people, a great idea is simply a member of the orchestra that achieves that vision. Avoid the bad habit of overwriting your screenplay… Jack enters the living room and cautiously glances around. 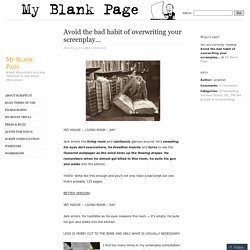 He’s sweating, his eyes dart everywhere, he breathes heavily and turns to see the flowered wallpaper as the wind kicks up the flowing drapes. He remembers when he almost got killed in this room, he pulls his gun and walks into the kitchen. YIKES! Write like this enough and you’ll not only have a bad script but one that’s probably 125 pages. Jack enters. Writing Goals: 2015 [Part 7] —Time Management. We pick up from last week with our year-end attempt to help GITS readers set and achieve their writing goals for 2015. 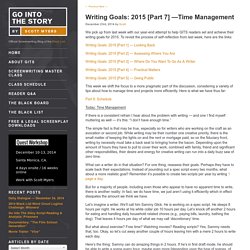 To revisit the process of self-reflection from last week, here are the links: Writing Goals: 2015 [Part 1] — Looking Back. The Strange Case of Cormac McCarthy, Screenwriter. We rarely appraise our most revered literary writers on the basis of their screenwriting. The bald truth is that most great writers never wrote original screenplays, and when they did, they were seldom produced. (Even the crop of famous literary men who dabbled in Hollywood — Faulkner, Fitzgerald, Nabokov, Dos Passos — routinely failed.) Nor do we judge these writers on their adapted screenplays, precisely because these works were adaptations and not originals, but also because Hollywood is a collaboration machine that historically chews up and swallows the solitary imagination, at least during production.

A Screenwriter's Bag of Tricks. Most of our writing tips focus on the creation of a sound story, regardless of the medium in which you are working. But since the writing of screenplays has its own unique restrictions, requirements, and opportunities, we thought it might be useful to offer a Screenwriter's Bag of Tricks. Like any good grab bag, this collection of tips and techniques is in no particular order. 8 Steps All Writers Follow When They Edit. Every author has a different approach to writing. I know this because I read Rebecca Bradley’s wonderful series on how writers do their thing. Each author she spotlights adds a personal twist that intrigues me. Not so surprisingly, no one’s approach is like mine.

Here’s how I write a novel: Draft out events for the novel in a spreadsheet program like Excel. Famous Authors’ Handwritten Outlines for Great Works of Literature. Shakespeare's Five Act Structure: Learn It, Live It, Love It. The More Things Change If you have spent any time at all learning about the art of writing, especially creative writing, then you have no doubt heard about "the 3 Act Structure. " Act I introduces the characters, world, and plot. In Act II, the action "rises" until we reach the climax. Finally, in Act III, the story is completely resolved. Unfortunately, this formula is egregiously simplified and leaves too much to the imagination. The Readability Factor. Dave Trottier is a produced screenwriter, award-winning teacher, acclaimed script consultant, author of The Screenwriter’s Bible , and friendly host of keepwriting.com. When you sit down and write a script, who is your audience?

Is it the eventual producer? The Strange Case of Cormac McCarthy, Screenwriter. From the Over Describer to the Compulsive Recapper: Eight Screenwriting Screw-ups to Avoid. Script Reader James Napoli gives us a run down of the most common mistakes he sees, and how to fix them. By James Napoli. The Screenwriting Process. Some people might think that the natural next step after nailing your premise is to put together a plot. Download 70 Screenplays Legally and Free. [Video]: John August Pt 1 - Writing Better Action - The Story DepartmentThe Story Department. Creative Spark: Dustin Lance Black. Article - Loglines Using the Seven Basic Elements of Screenplays. Building A Better Script: Michael Hauge’s Blueprint. The Logline - The #1 Screenwriting Tool for Pitching your Story. Hi Kbfilmworks. I assure you no ego flaunting nor religious zealot of any kind are my intentions my goal is to help you with your concept and logline.

Discovering the Great Movie Idea for Your Next Screenplay. Blake Snyder’s Beat Sheet. The Blake Snyder Beat Sheet is the best plot structure template I’ve come across. It breaks down the three-act structure into bite-size, manageable sections, each with a specific goal for your overall story. The Screenwriting Process. If you’ve made it this far through the process then – good news! 14 Characteristics of the Standard Action Hero. Martin, the item that jumped out of your list for me was this one: “Chain smoking overweight” What about the character whose doctor has insisted they quit smoking, so the character gains wait, and now they’re stressed out AND on a diet AND on cigarettes when the crisis hits.

Hidden Emotions: How To Tell Readers What Characters Don’t Want To Show. Screenwriting: Plot Reversals Shown in Scene. 20 Things That Helped Me Finish the (Current Draft of the) MANCHILD Screenplay. David Mamet on Drama (a Memo to 'The Unit' Writers) Kill Your Outline: A Screenwriter’s Guide To Discovering Your Character. 7 Act Structure Archives. Stage 32 / The Blood List presents: The Search for New Blood Screenwriting Contest. 29 Plot Templates: Know the Readers Expectations Before you Bust Them — Fiction Notes. An Interview with Robert McKee, the God of Story. The treatment debate: To write the story or not and how little is too little? Top Five Scene Pacing Tips: How to Pace the Scene. On Finding New Screenplay Structures for Independent Films. Kanon literatury polskiej (wartej sfilmowania) 52 Terrific Tips for Writing Better. All Movie Scripts at IMSDb. TV Writer Must-Have: The TV Bible - LeeJessup.com.

Dispersing to Naught: On Film Crit Hulk's Misuse of Shakespeare - Parabasis. Five Ingredients for Great Characters That You’re Not Using (Yet) - ScreenCraft. TYLKO U NAS: Pełen seksualnych aluzji zwiastun "Ciacha" Ask Dr. Format by Dave Trottier. How to Write a Courtroom Based Screenplay. Line of Duty's Jed Mercurio: 'I like to write characters who are conflicted' Logline It! - The #1 Screenwriting Destination for Pitching your Story. BREAKING IN: Elementary, My Dear Screenwriter- 7 Things You Can Learn from "Sherlock" TV Writers Rooms on Twitter: A Guide to 16 of the Very Be. 4 Pillars of Strong Characters - Writingeekery.