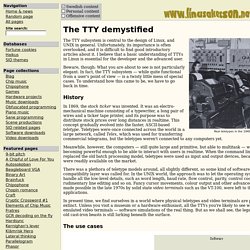 The TTY subsystem is central to the design of Linux, and UNIX in general. Unfortunately, its importance is often overlooked, and it is difficult to find good introductory articles about it. I believe that a basic understanding of TTYs in Linux is essential for the developer and the advanced user. Beware, though: What you are about to see is not particularly elegant. In fact, the TTY subsystem — while quite functional from a user's point of view — is a twisty little mess of special cases. History In 1869, the stock ticker was invented. Meanwhile, however, the computers — still quite large and primitive, but able to multitask — were becoming powerful enough to be able to interact with users in realtime. There was a plethora of teletype models around, all slightly different, so some kind of software compatibility layer was called for.

In present time, we find ourselves in a world where physical teletypes and video terminals are practically extinct. The use cases. Advanced Bash-Scripting Guide. An in-depth exploration of the art of shell scripting Mendel Cooper 10 Mar 2014 This tutorial assumes no previous knowledge of scripting or programming, yet progresses rapidly toward an intermediate/advanced level of instruction . . . all the while sneaking in little nuggets of UNIX® wisdom and lore. 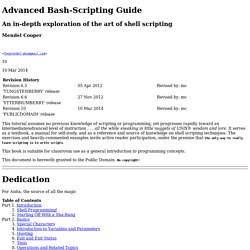 It serves as a textbook, a manual for self-study, and as a reference and source of knowledge on shell scripting techniques. The exercises and heavily-commented examples invite active reader participation, under the premise that the only way to really learn scripting is to write scripts. This book is suitable for classroom use as a general introduction to programming concepts. This document is herewith granted to the Public Domain. For Anita, the source of all the magic. 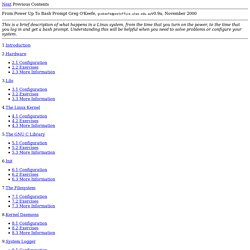 Understanding this will be helpful when you need to solve problems or configure your system. How to Find Out Top Directories and Files (Disk Space) in Linux. As a Linux administrator, you must periodically check which files and folders are consuming more disk space. 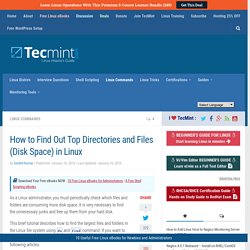 It is very necessary to find the unnecessary junks and free up them from your hard disk. This brief tutorial describes how to find the largest files and folders in the Linux file system using du and find command. If you want to learn more about these two commands, then head over to the following articles. How to Find Biggest Files and Directories in Linux Run the following command to find out top biggest directories under /home partition. Bash If statements, Exit Status and Comparison Operators, A beginners guide to bash scripting part 2 - In my previous post we looked at a simple bash backup script example, which would sync data between servers using “rsync” and then send us an email. 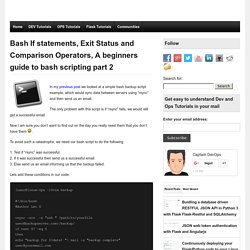 The only problem with this script is if “rsync” fails, we would still get a successful email. Now I am sure you don’t want to find out on the day you really need them that you don’t have them To avoid such a catastrophe, we need our bash script to do the following 1. Test if “rsync” was successful. 2. Lets add these conditions in our code. [user@linux-vps ~]$vim backup #! “if” bash keyword Bash has a few built-in keywords to help you run commands based on conditions. If condition then do something else do something else fi Test command “test” is a bash built-in command which will test our expression and return True or False Exit Status of a command “$?” Bash Comparison Operators. We can use the following operators for numeric comparison. And the following for String or word comparison == Is Equal To !