German automakers who once laughed off Elon Musk are now starting to worry. It wasn't long ago when the German car industry was still laughing out loud about Elon Musk and his Tesla Motors electric car company. 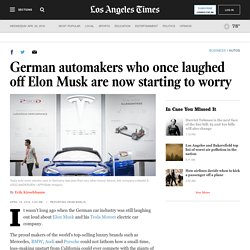 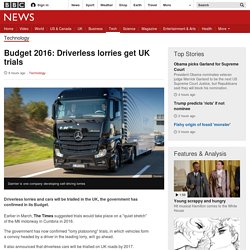 Goodyear Made Spherical MagLev Tires That Are Totally Nuts. The tire of the future is a ball. 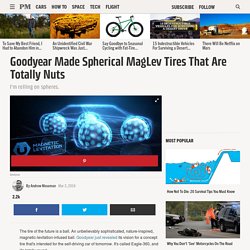 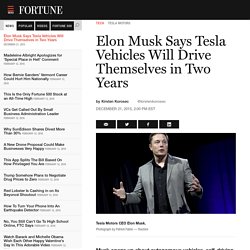 Producing a fully autonomous vehicle that can operate in any condition and on any road, for example, is easy-ish. And Tesla Motors TSLA 0.38% , the all-electric automaker that Musk heads, is two years away from achieving it. Why you should buy a driverless car, in 1 chart. (James Anderson/RAND/Brian Fung) Driverless cars are bound to introduce a host of new challenges that society will have to grapple with. 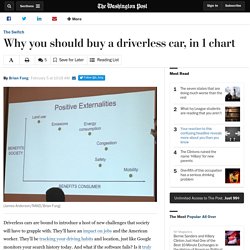 They'll have an impact on jobs and the American worker. They'll be tracking your driving habits and location, just like Google monitors your search history today. And what if the software fails? Is it truly safe? All of these are interesting and serious questions that we'll be addressing in future posts. The further right you go on the X-axis, the more a particular stated benefit of driverless cars ("mobility") helps you personally. Correction to article: "The First Person to Hack the iPhone Built a Self-Driving Car"

The article by Ashlee Vance did not correctly represent Tesla or MobilEye. 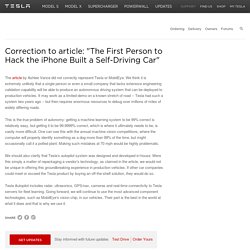 We think it is extremely unlikely that a single person or even a small company that lacks extensive engineering validation capability will be able to produce an autonomous driving system that can be deployed to production vehicles. It may work as a limited demo on a known stretch of road -- Tesla had such a system two years ago -- but then requires enormous resources to debug over millions of miles of widely differing roads. This is the true problem of autonomy: getting a machine learning system to be 99% correct is relatively easy, but getting it to be 99.9999% correct, which is where it ultimately needs to be, is vastly more difficult. Driverless cars could spell the end for domestic flights. Self-driving cars could disrupt the airline and hotel industries within 20 years as people sleep in their vehicles on the road, according to a senior strategist at Audi. 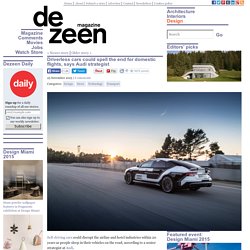 Short-haul travel will be transformed and the hassle of getting to and from airports eliminated, said Sven Schuwirth, vice president of brand strategy and digital business at the German car brand. Business travellers will be able to avoid taking domestic flights to meetings and will sleep and work in their cars en route instead of checking into city-centre hotels, he said. "In the future you will not need a business hotel or a domestic flight," Schuwirth told Dezeen. "We can disrupt the entire business of domestic flights. " B-2 Bomber vs. Peregrine Falcon. Nissan envisions a self-driving car that gives you the choice. DETROIT, MI - For those of us who enjoy the simple pleasure of driving and fear the advent of autonomous vehicles could be its demise, Nissan has a refreshing view of the not-too-distant future. 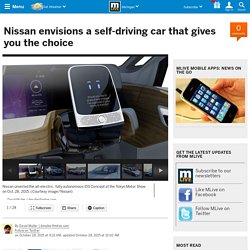 In unveiling its all-electric, autonomous IDS concept car the Tokyo Motor Show on Wednesday, the Japanese automaker said it sees driving as a choice you will make. "You can choose to enjoy the excitement of driving," the company says in the video below for the IDS. "Or free yourself form driving to enjoy time in the car. " Tesla Adds High-Speed Autonomous Driving to Its Bag of Tricks. Advertisement Continue reading the main story Video WASHINGTON — It is not every day you get to open a door and step into the future. 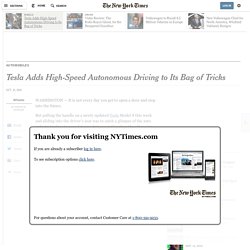 But pulling the handle on a newly updated Model S this week and sliding into the driver’s seat was to catch a glimpse of the auto industry’s plans to soon let cars drive us, rather than the other way around. The updated Tesla, an already high-tech that starts at about $75,000, was equipped with what the company calls Autopilot — a semiautonomous feature that allows hands-free, pedal-free driving on the highway under certain conditions. The car will even change lanes autonomously at the driver’s request (by hitting the turn signal) and uses sensors to scan the road in all directions and adjust the throttle, steering and brakes. It is the first time that a production vehicle available to consumers will have such advanced self-driving capabilities. Volvo: We will be responsible for accidents caused by our driverless cars. Volvo has become one of the first car companies to confirm that it will accept full responsibility for any accidents caused by its future driverless cars. 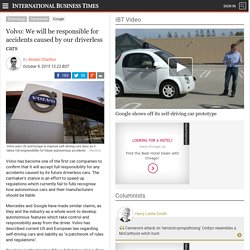 The carmaker's stance is an effort to speed up regulations which currently fail to fully recognise how autonomous cars and their manufacturers should be liable. Mercedes and Google have made similar claims, as they and the industry as a whole work to develop autonomous features which take control and responsibility away from the driver. Volvo has described current US and European law regarding self-driving cars and liability as "a patchwork of rules and regulations". Speaking in Washington DC on 8 October, Volvo Cars president Hakan Samuelsson praised the US for currently being "the most progressive country in the world in autonomous driving.

" The country already allows Google and others to operate autonomous cars on the public roads of some some states. Daimler driverless lorry tested in motorway traffic. Image copyright Daimler A driverless lorry developed by Daimler has been tested on a public road for the first time, in Germany. At the push of a button, the vehicle's "highway pilot" helped it avoid other road users via a radar and camera sensing system. The Physics of Countersteering. MIT self-driving carts - Death of the cab driver.

Google’s Driverless Cars Run Into Problem: Cars With Drivers. Photo MOUNTAIN VIEW, Calif. — Google, a leader in efforts to create driverless cars, has run into an odd safety conundrum: humans. Last month, as one of ’s self-driving cars approached a crosswalk, it did what it was supposed to do when it slowed to allow a pedestrian to cross, prompting its “safety driver” to apply the brakes. The pedestrian was fine, but not so much Google’s car, which was hit from behind by a human-driven sedan. Google’s fleet of autonomous test cars is programmed to follow the letter of the law. Shockwaves. V6 engine working paper model. The Wright Brothers - They Began a New Era. The Wright Brothers by David McCullough Simon and Schuster, 320 pp., $30.00 The Wright brothers, Wilbur and Orville, come down to us in photographs as somewhat stiff, unromantic figures in dark jackets and white shirts, often with hats.

They were not twins—Wilbur was four years older—but they were remarkably similar in their thinking and abilities. They worked and for the most part lived together all their lives, sober, intelligent, virtuous to a fault. Their father, Bishop Milton Wright, was an itinerant churchman with high principles. Autonomous cars and man's future: The road ahead. It’s no dramatic hyperbole to suggest that the automotive industry is destined to change more in the next 20 years than it has in the last 100. For a century, cars have consisted of a reasonably simple combination of four wheels, engine, steering system and pilot. Human and mechanics. But the introduction of GPS technology alongside infrared and radar scanning, high definition cameras and, most importantly, the processing tech to stitch it all together has resulted in a truly disruptive game changer: the autonomous car.

Google, for instance, has chalked up over 700,000 autonomous miles in their (totally coincidentally) smiley faced, unthreatening driverless car, and this January Audi made a big fuss about driving the 569 miles from San Francisco to this year’s CES tech show in Las Vegas in an autonomous A7. Volvo are running a scheme where 100 new owners will drive 50km of roads around Gothenburg autonomously in their new XC90s. Bernoulli's Principle Demonstration: Bernoulli's Ball. Fiat boss: Google and Apple may disrupt car industry. 3 March 2015Last updated at 11:40 ET By Russell Hotten Business reporter, Geneva Motor Show Google is developing a driverless car The traditional motor industry would be foolish to ignore moves by Google and Apple into car technology, said Fiat-Chrysler boss Sergio Marchionne. The chief executive of one of the world's biggest carmakers said the two US companies were "incredibly serious" about their automotive ambitions.

He said their move into driverless technology and electric vehicles could be "disruptive" for manufacturers. Driverless car beats racing driver for first time. Have a scientific problem? Steal an answer from nature. World's Simplest Electric Train 【世界一簡単な構造の電車】 Why rolling down your cars' windows is more fuel efficient than using AC. Kovacs-Triple Backflip-Landing(NO.17) The "Forever Lock". Un-pickable lock with an amazing design! (Detailed Demo) Robo-mate exoskeleton under development in Europe. 11 September 2013Last updated at 08:42 ET The exoskeleton aims to make it safer for staff to handle heavy weights Efforts to develop an exoskeleton for the workplace are under way, backed by EU funds.

The SpaceX, Tesla and PayPal founder envisions using magnets and fans to shoot capsules floating on a cushion of air through a long tube. If the Hyperloop is ever built, a trip on it between the two California cities would last about 30 minutes, he said. But Mr Musk says he is currently too busy to develop the project himself. In a paper outlining the Hyperloop proposal, Mr Musk suggested the solar-powered system would be a faster, safer, less costly, and more efficient mode of transport between Los Angeles and San Francisco than the high-speed train currently under development. Continue reading the main story. Atlas Human-Powered Helicopter - AHS Sikorsky Prize Flight. Raffaello D'Andrea: The astounding athletic power of quadcopters. 120 year-old device mimics song of bird. T8 the Bio Inspired 3D Printed Spider Octopod Robot. Supersonic Flight, Sonic Booms.

Spymaster Orcasub: The $2 million made-to-order private submarine shown as mock-up at Harrods. Quadrocopter Pole Acrobatics. A robot that flies like a bird. Ball Thrown Back from moving car in the opposite direction. The Invisible Bicycle Helmet. Festo - BionicOpter. Bubba's Hover. Thought-guided helicopter takes off. Model helicopter guided by power of thought. What Is Elon Musk's Hyperloop.