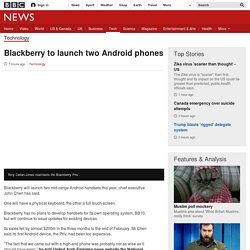 One will have a physical keyboard, the other a full touch-screen. Blackberry has no plans to develop handsets for its own operating system, BB10, but will continue to issue updates for existing devices. Its sales fell by almost $200m in the three months to the end of February. Mr Chen said its first Android device, the Priv, had been too expensive. "The fact that we came out with a high-end phone was probably not as wise as it should have been," he told United Arab Emirates news website the National.

Image copyright Getty Images "A lot of enterprise customers have said to us, 'I want to buy your phone, but $700 [£491] is a little too steep for me. Mr Chen had previously blamed the company's poor sales figures on delays in negotiations with mobile networks about its Priv handset. Not even Google's Android can pull BlackBerry out of its tailspin. We're finally getting a clearer picture of whether people are giving BlackBerry another chance. 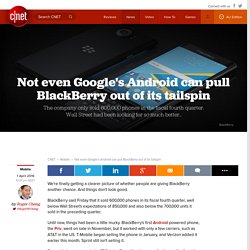 And things don't look good. BlackBerry said Friday that it sold 600,000 phones in its fiscal fourth quarter, well below Wall Street's expectations of 850,000 and also below the 700,000 units it sold in the preceding quarter. Until now, things had been a little murky. BlackBerry's first Android-powered phone, the Priv, went on sale in November, but it worked with only a few carriers, such as AT&T in the US. T-Mobile began selling the phone in January, and Verizon added it earlier this month. Beyond token comments by CEO John Chen, like things are "quite positive" and "so far, so good," there hadn't been many indicators of how many people were buying the Priv. Facebook drops support for Blackberry. Image copyright Blackbery. 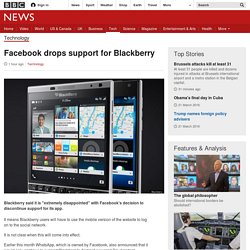 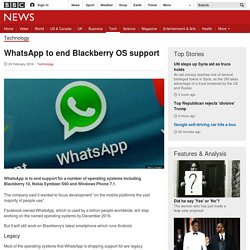 The company said it wanted to focus development "on the mobile platforms the vast majority of people use". Facebook-owned WhatsApp, which is used by a billion people worldwide, will stop working on the named operating systems by December 2016. Blackberry to keep operating in Pakistan. Image copyright AP Blackberry is no longer going to shut down its operations in Pakistan as it has resolved a row concerning its users' messages. 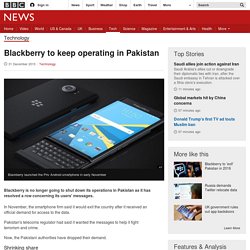 In November, the smartphone firm said it would exit the country after it received an official demand for access to the data. Pakistan's telecoms regulator had said it wanted the messages to help it fight terrorism and crime. Now, the Pakistani authorities have dropped their demand. The original request to see emails and other messages sent via Blackberry phones was made in July.

Blackberry to 'exit' Pakistan over data-retention row. Image copyright AP Phone-maker Blackberry is to stop operating in Pakistan at the end of 2015 because of government requests to monitor customer data. 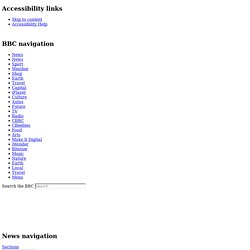 The Pakistani government wanted to be able to monitor every message and email sent via its phones, it said. In a blogpost, it said it had decided to "exit the market altogether" over the row. It said Pakistan's demand was not to do with public safety but a request for "unfettered access". In July, Pakistan's Telecommunications Authority told Blackberry the servers underpinning its messaging business would no longer be allowed to operate in the country, citing "security reasons". Marty Beard, chief operating officer at Blackberry, said the "truth" of the matter was Pakistan had wanted to look at all the traffic passing across its messaging servers but the phone company would not "comply with that sort of directive". "Remaining in Pakistan would have meant forfeiting our commitment to protect our users' privacy.

Blackberry Priv: The final phone in the coffin? We all know the Blackberry story. 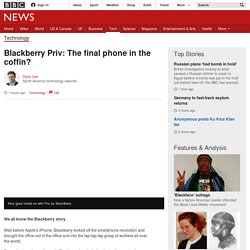 Well before Apple's iPhone, Blackberry kicked off the smartphone revolution and brought the office out of the office and into the tap-tap-tap grasp of workers all over the world. Ease of use and security made Blackberry handsets the choice for corporations everywhere - not to mention world leaders. Embracing Android, BlackBerry may finally put its BB10 software out of its misery.

The BlackBerry Priv could change everything for the embattled smartphone manufacturer. 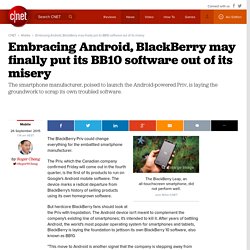 The Priv, which the Canadian company confirmed Friday will come out in the fourth quarter, is the first of its products to run on Google's Android mobile software. The device marks a radical departure from BlackBerry's history of selling products using its own homegrown software. BlackBerry to acquire Good Technology for $425 million. Smartphone maker BlackBerry announced it will acquire mobile security firm Good Technology for $425 million. 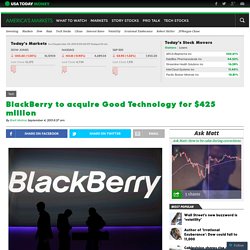 In a statement released Friday, BlackBerry says the all-cash deal will help the company expand its mobile security platform aimed at businesses. Good Technology works with 6,200 organizations, including several in the Fortune 100, says BlackBerry. BlackBerry Ltd’s purchase of Android-related domain names sparks Android phone speculation. TORONTO — BlackBerry Ltd, which has been coy about its ambitions to make a mainstream Android smartphone, fuelled more speculation about its plans this week when it scooped up two Android-related domain names. 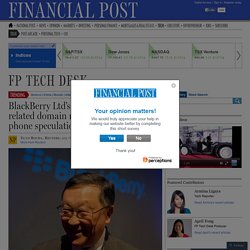 Several blog posts in the last two days have noted that the Canadian handset maker bought the domain names “AndroidSecured.com” and “AndroidSecured.net” this week. That spurred more chatter that it intends to build a device powered by Google Inc’s Android platform, which powers the vast majority of smartphones sold across the globe. The purchase of the domain names is particularly interesting since BlackBerry Chief Executive John Chen has declined to confirm a June Reuters report that said the company was planning an Android phone.

Blackberry firm unveils new high-security tablet. 16 March 2015Last updated at 09:18 ET By Zoe Kleinman Technology reporter, BBC News The new device runs on Samsung hardware Blackberry-owned company Secusmart has unveiled a new tablet in collaboration with Samsung and IBM. The Secutablet is "based on" the Samsung Galaxy 10.5 and runs on Samsung hardware, the firm said. The additional security it offers is aimed at businesses and governments, but less vigorously protected social media and video platforms can also be used on the device, Secusmart added. The tablet is likely to be priced at $2,380 (£1,609), according to reports. The Secutablet is compatible with Blackberry 10 and is currently undergoing security certification at the German Federal Office for Information Security.

Blackberry Leap targets career builders at MWC. 3 March 2015Last updated at 08:40 ET Blackberry says its latest handset offers 25 hours of normal use battery life Blackberry has announced a touch-screen phone without physical keys, at the Mobile World Congress trade show. The Blackberry Leap is not the company's first all-touch phone - but it may come as a surprise, since its chief executive said last March his focus was going to be "very keyboard-centric". The Canadian company has also revealed it is bringing more of its software to rival platforms. Blackberry wants to force popular services onto its platform in the name of net neutrality. Blackberry CEO John Chen has penned on the company’s blog his argument for extending net neutrality rules to the application and content layers.

He cites the opening up of its Blackberry Messenger service (BBM) on the iPhone and Android platforms. His complaint is that popular services like Apple’s iMessage and Netflix’s streaming video apps are not available on Blackberry’s platform, and therefore unfairly shut out Blackberry users from these “essential” services. His solution? Get the government to mandate that certain applications and content services be forced to provide their services on the Blackberry platform, in the name of net neutrality. Chen’s claim leads one to wonder if he’d be advocating the same thing if we rewound the mobile market to 2007. As we all know, Apple and Google now dominate the mobile ecosystem, leaving early entrants like Blackberry and Microsoft with niche market shares. Software platforms differ from pipes in significant ways. Net Neutrality: No on Reclassification, Yes on Adding Content & App Providers.

U.S. President Obama and FCC Chairman Tom Wheeler have put net neutrality back on the front burner with their recently announced support for reclassifying both wireline and wireless broadband as Title II services. Congressional committees are holding hearings this week to consider these and perhaps other proposals. Desperate call - App makers should be required to make software for Blackberry.

Revenue fell to $793m (£507m) from $1.19bn a year earlier, missing analyst expectations. Chief executive John Chen said the revenue figure was "not satisfying". However, he added that he thought Blackberry might be able to stabilise and grow its revenues by 2016, but that he could not promise profitability. Blackberry reported a net loss of $148m for the quarter, significantly less than the $4.4bn loss it reported a year earlier. Blackberry Classic goes 'back to company's roots' 17 December 2014Last updated at 13:09 ET Analysts predict the Qwerty keyboard will please existing fans Blackberry has launched what it calls a "no-nonsense" smartphone, the Blackberry Classic. The device has a full "Qwerty" keyboard, resembling the design which made Blackberry a market leader before it was overtaken by competitors. Analysts said the firm was going "back to its roots" in order to appeal to business customers.

From a position at the end of 2013 where BlackBerry had 3.6m UK users, against 1.9m for Windows Phone and legacy Windows Mobile users, by the end of this year Blackberry will have 2.4m users - against 2.7m for Microsoft’s platform, eMarketer says. BlackBerry to take on IoT headaches with Project Ion. BlackBerry says it can take back-end software development off the to-do lists of enterprises that want to take advantage of the Internet of Things.

BlackBerry launches low-cost phone for Indonesia. Why we chose to invest in NantHealth. What a Big Investment Says About BlackBerry's Endgame. Photo. BlackBerry's Woes Draw Canada's Contrarian Mogul Into Spotlight. Aaron Harris/ReutersV. 120,000 Apps in BlackBerry World (Spoiler - 47,000 by One Developer) - John Paczkowski - Mobile. Looks like BlackBerry has seen some success with its developer outreach efforts, though perhaps not quite the sort it would like. A cursory review of BlackBerry World, the company’s app store, reveals that upward of 47,000 of the applications it offers for download are being peddled by a single developer, S4BB. BlackBerry Founders Looking at Buying Company. Blackberry letter seeks to reassure customers.

Inside RIM: An exclusive look at the rise and fall of the company that made smartphones smart. UPDATE 5-BlackBerry hits bump in turnaround road, shares plunge. BlackBerry on why you should give BBM a chance (Q&A) How BlackBerry blew it: The inside story. The Rise and Fall of BlackBerry: An Oral History.