What's the Maker Movement and Why Should I Care? If something is worth doing, it's worth skipping lunch for. 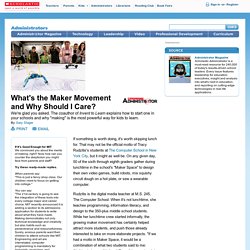 That may not be the official motto of Tracy Rudzitis's students at The Computer School in New York City, but it might as well be. On any given day, 50 of the sixth through eighth graders gather during lunchtime in the school's "Maker Space" to design their own video games, build robots, mix squishy circuit dough on a hot plate, or sew a wearable computer. Rudzitis is the digital media teacher at M.S. 245, The Computer School. When it's not lunchtime, she teaches programming, information literacy, and design to the 350-plus middle school students.

While her lunchtime crew started informally, the growing maker movement has certainly helped attract more students, and push those already interested to take on more elaborate projects. She says her experiences constantly remind her that children are capable of powerful ideas. The same type of excitement happens in Jim Tiffin's—classes at The Harley School in Rochester, New York. Teacher Maker Resources. Please subscribe to my very occasional newsletter! 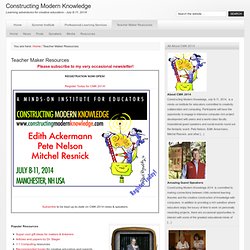 My 1:1 Toolbox (2011) Creativity software I recommend for student laptops. Making Matters! How the Maker Movement Is Transforming Education. By Sylvia Libow Martinez and Gary S. 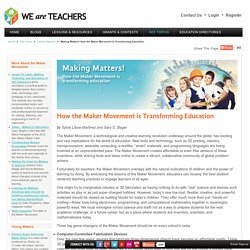 Stager The Maker Movement, a technological and creative learning revolution underway around the globe, has exciting and vast implications for the world of education. New tools and technology, such as 3D printing, robotics, microprocessors, wearable computing, e-textiles, “smart” materials, and programming languages are being invented at an unprecedented pace. The Maker Movement creates affordable or even free versions of these inventions, while sharing tools and ideas online to create a vibrant, collaborative community of global problem-solvers. Fortunately for teachers, the Maker Movement overlaps with the natural inclinations of children and the power of learning by doing.

One might try to marginalize robotics or 3D fabrication as having nothing to do with “real” science and dismiss such activities as play or as just super-charged hobbies. Confronting the Challenges of a Participatory Culture:  Media Education in the 21st Century. Sites/dmlcentral/files/resource_files/Quest_to_LearnMacfoundReport.pdf. Makers and DML - Separated At Birth? I have a question for you. 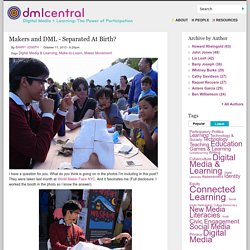 What do you think is going on in the photos I'm including in this post? They were taken last month at World Maker Faire NYC. And it fascinates me (Full disclosure: I worked the booth in the photo so I know the answer). Okay, I’ll tell you what I see and how it captures the “separated at birth” story between the Maker Movement ("Makers") and the Digital Media and Learning ("DML") communities. But first, about the photos. (Phew. Home - Mozilla Webmaker. Blending High- and Low-Tech Worlds with a Maker-Driven Agenda. Over the past year, the maker movement has gained traction in the digital media and learning community thanks in part to Kylie Peppler, Assistant Professor of Learning Sciences at Indiana University, who is spearheading the DML Hub’s Make-to-Learn initiative with Creativity Labs.

As part of the initiative, Peppler is leading the Make-to-Learn Youth Contest, an eight-week challenge for youth makers hosted on instructables.com, and the Make-to-Learn Symposium on March 13, 2013, the day before the Digital Media and Learning Conference in Chicago. Through these activities, Peppler and her colleagues hope to advance an ongoing conversation at the intersection of educational research and DIY culture.

We sat down with Peppler to learn more about how arts education is progressing in the 21st century and what role maker culture will play in the structuring of future in-school environments. Webinar/assets/files/Engaging-Youth-Through-Making.pdf. Young Makers. Www.imls.gov/assets/1/AssetManager/Makerspaces.pdf. A Librarian's Guide to Makerspaces: 16 Resources. "There were more than 135 million adult makers, more than half of the total adult population in America, in 2015.

" What is a makerspace? You’ve no doubt been hearing that word more than a few times over the past several years. Maker Camp. Will Richardson on knowmadic schooling. The Coalition for Science After School: Philadelphia Maker Celebration. MakerClubPlaybook-Jan2012.pdf. Makerspace Playbook. Schools Making Makerspaces: Verrado Middle School, before & after Why Educators Want to Attend Maker Faire 2012 By Michelle "Binka" Hlubinka On · 16 Comments Take a peek our current draft of the Makerspace Playbook, intended to offer some guidance to those who are hoping to start a Makerspace at their school or in their community. 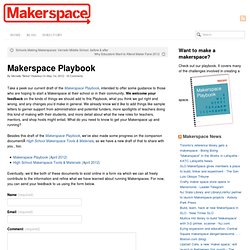 DIY Instructables - Share What You Make. Adafruit Learning System. Every Child a Maker: How the government and private sector can turn kids on to science and engineering through Making. Photograph by Saul Loeb/Getty Images.

Earlier this year at the White House Science Fair, President Obama met Joey Hudy, a 14-year-old who developed the “extreme marshmallow cannon” capable of projecting a marshmallow 175 feet. Can DIY Movement Fix a Crisis in U.S. Science Education? JEFFREY BROWN: Next, making the stuff of science and making learning about it more fun for kids. 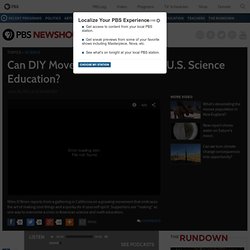 NewsHour science correspondent Miles O’Brien shows us how. MILES O’BRIEN: At first blush, it all seems so typically suburban. AnnMarie Thomas, "Every Child a Maker" at World Maker Faire 2012. Engaging Students in the STEM Classroom Through "Making" Students at Analy High School painting the walls of their new maker space. 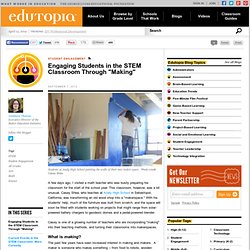 Photo credit: Casey Shea A few days ago, I visited a math teacher who was busily preparing his classroom for the start of the school year. This classroom, however, was a bit unusual. Casey Shea, who teaches at Analy High School in Sebastopol, California, was transforming an old wood shop into a "makerspace. " With his students’ help, much of the furniture was built from scratch, and the space will soon be filled with students working on projects that might range from solar-powered battery chargers to geodesic domes and a pedal-powered blender.

Casey is one of a growing number of teachers who are incorporating "making" into their teaching methods, and turning their classrooms into makerspaces. Dmp.nysci.org/system/files/filedepot/1/NYSCI_MAKER_BLUEPRINT.pdf. The Maker Education Initiative.