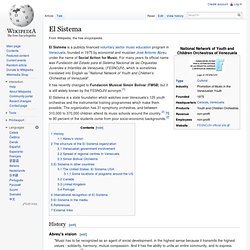 For many years its official name was Fundación del Estado para el Sistema Nacional de las Orquestas Juveniles e Infantiles de Venezuela, (FESNOJIV), which is sometimes translated into English as "National Network of Youth and Children's Orchestras of Venezuela". It has recently changed to Fundación Musical Simón Bolívar (FMSB) but it is still widely known by the FESNOJIV acronym.[1] El Sistema is a state foundation which watches over Venezuela's 125 youth orchestras and the instrumental training programmes which make them possible. The organization has 31 symphony orchestras, and between 310,000 to 370,000 children attend its music schools around the country.[2] 70 to 90 percent of the students come from poor socio-economic backgrounds.[2] History[edit] El Sistema. José Antonio Abreu. José Antonio Abreu Anselmi (born May 7, 1939) is a Venezuelan orchestra conductor, pianist, economist, educator, activist, and politician. 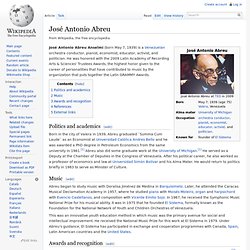 He was honored with the 2009 Latin Academy of Recording Arts & Sciences' Trustees Awards, the highest honor given to the career of personalities that have contributed to music by the organization that puts together the Latin GRAMMY Awards. Politics and academics[edit] Born in the city of Valera in 1939, Abreu graduated ¨Summa Cum Laude¨ as an Economist at Universidad Católica Andres Bello and he was awarded a PhD degree in Petroleum Economics from the same university in 1961.[1] Abreu also did some graduate work at the University of Michigan.[1] He served as a Deputy at the Chamber of Deputies in the Congress of Venezuela. After his political career, he also worked as a professor of economics and law at Universidad Simón Bolívar and his Alma Mater. 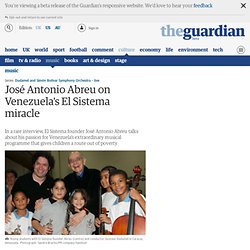 On the afternoon we meet, the sun is shining and the streets are bustling. Nevertheless, to make the short journey by foot from a nearby car park, we are accompanied by three conspicuously armed guards. This is Caracas, one of the most violent cities in the world. Venezuela's murder rate is three times that of Iraq and four times that of Mexico. On average, 53 people are murdered here every day. This grisly statistic is on my mind as I am ushered in to meet Abreu, the 73-year-old former economist and conductor whose visionary philosophy has, since 1975, been based on the notion that a free, immersive classical music education for the poorest of the poor might positively influence the social problems plaguing the country. 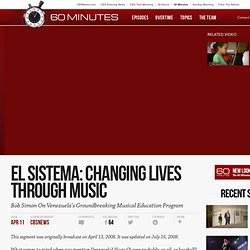 It was updated on July 16, 2008. What comes to mind when you mention Venezuela? Hugo Chavez probably, or oil, or baseball? What probably does not come to mind is classical music. And yet, Venezuela is the home of a music program that's so extraordinary it has been hailed as the future of classical music itself. As correspondent Bob Simon first reported in April, it's called "el Sistema" - "the system" - and it's all about children, about saving them - hundreds of thousands of children - through music.

Dudamel: Conducting a Life. Miami music project. El Sistema: From Venezuela to the United States. Imagine a group of 4th-grade students excited to remain after school for classical music instruction. 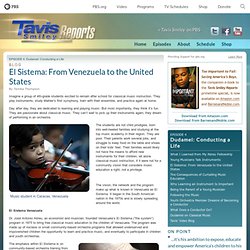 They play instruments, study Mahler’s first symphony, train with their ensemble, and practice again at home. Day after day, they are dedicated to learning and playing music. But most importantly, they think it’s fun. They are passionate about classical music. They can’t wait to pick up their instruments again; they dream of performing in an orchestra. Music student in Caracas, Venezuela The students are not child prodigies, born into well-heeled families and studying at the top music academy in their region. The vision, the network and the program make up what is known in Venezuela as El Sistema.