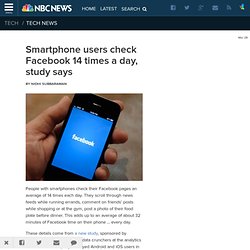 They scroll through news feeds while running errands, comment on friends' posts while shopping or at the gym, post a photo of their food plate before dinner. This adds up to an average of about 32 minutes of Facebook time on their phone ... every day. These details come from a new study, sponsored by Facebook and conducted by data crunchers at the analytics firm IDC. The company surveyed Android and iOS users in the U.S., and 7,446 men and women between the ages of 18 and 44 shared details about their daily Facebook and smartphone habits. On average, this group spent about two and a half hours every day on their smartphones. Almost half the group — 44 percent — used their phones as an alarm clock (I know I do), and 79 percent checked their phones within the first 15 minutes of waking up (guilty, once again). 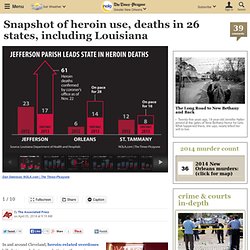 Some Ohio police chiefs say heroin is easier for kids to get than beer. In Missouri, admissions to treatment programs for heroin addiction rose 700 percent in the past two decades. In Massachusetts, state police say at least 185 people have died from suspected heroin overdoses in the state since Nov. 1, and the governor has declared a public health emergency. With heroin use rising across the U.S., The Associated Press queried state health departments, medical examiner's offices and law enforcement agencies across the nation for statistics related to use, overdoses and treatment to obtain a more detailed picture of the problem on the ground.

While some states reported few changes, others pointed to heroin as a significant public health concern. The Effects of Heroin Addiction: An Infographic. Heroin: The Most Addictive Drug? 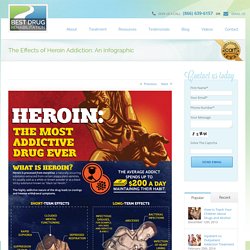 Heroin is known as the most addictive drug ever, and with very good reason. Those who suffer from heroin addiction spend an average of $200 per day to maintain their habit. Although heroin comes from the natural-occurring morphine extracted from certain poppy plants, the effects are anything but natural. Sold as a white or brown powder or as a black sticky substance known as “black tar heroin,” the drug is highly addictive and often leads to cravings and intense withdrawal symptoms. Heroin. Heroin /ˈhɛroʊɪn/ (diacetylmorphine or morphine diacetate, also known as diamorphine (BAN, INN[4]) and commonly known by its street names of H, smack, boy, horse, brown, black, tar, and others[5] is an opioid analgesic originally synthesized by C.R.

Alder Wright in 1874 by adding two acetyl groups to the molecule morphine, which is found naturally in the opium poppy. It is the 3,6-diacetyl ester of morphine. Opiate-Related Drug Misuse Deaths in Six States: 2003. The misuse of prescription pain medications, especially those containing natural or synthetic opiates, is a problem attracting nationwide attention. 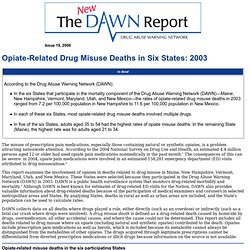 According to the 2004 National Survey on Drug Use and Health, an estimated 4.4 million persons aged 12 or older had used opiate pain medications nonmedically in the past month.1 The consequences of this can be severe: in 2004, opiate pain medications were involved in an estimated 158,281 emergency department (ED) visits attributed to drug misuse/abuse.2 This report examines the involvement of opiates in deaths related to drug misuse in Maine, New Hampshire, Vermont, Maryland, Utah, and New Mexico. These States were selected because they participated in the Drug Abuse Warning Network (DAWN) in 2003. DAWN collects data on all deaths where drugs played a role, either directly (such as an overdose) or indirectly (such as a fatal car crash where drugs were involved).

Opiate-related misuse deaths in the six participating States Notes. Infographic of the Day: America's Growing Heroin Problem. Heroin is, apparently, roaring back to life in America. 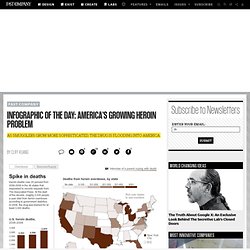 Deadly, ultra-pure black tar heroin has flooded the U.S. --a $10 bag can kill a person immediately. And it's effects aren't limited to shooting galleries and street corners. A multi-million dollar trafficking ring was just busted in the wealthy enclave of the Hamptons, where a 21-year-old former cheerleader was caught distributing baggies branded to the target demographic: They were stamped with names such as "Google" and "Privilege. " To put those stories in context, the AP has produced a series of infographics. Note that the heroin seems to be coming largely from Mexico, where local drug lords have apparently found new ways to refine poppy, which has both increased purity and dropped prices. This map lays out the "relative danger" posed by various drugs, by region. ...but heroin appears to be largely a problem of the northeast: Check out the AP's entire series of graphics.

Opiate abuse may be up, but overdose deaths are flat. 3 Reasons the Opiate Addiction Crisis in Vermont Impacts America. “In every corner of our state, heroin and opiate drug addiction threaten us,” said the Governor of Vermont, Peter Shumlin, on January 8th of this year. 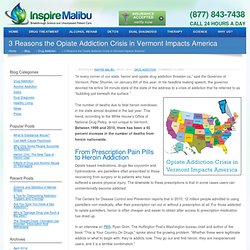 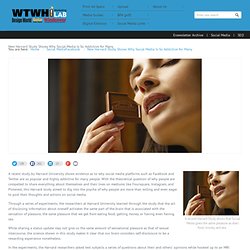 A recent study by Harvard University shows evidence as to why social media platforms such as Facebook and Twitter are so popular and highly addictive for many people. With the theoretical question of why people are compelled to share everything about themselves and their lives on mediums like Foursquare, Instagram, and Pinterest, this Harvard study aimed to dig into the psyche of why people are more than willing and even eager to post their thoughts and actions on social media. While sharing a status update may not give us the same amount of sensational pleasure as that of sexual intercourse, the science shown in this study makes it clear that our brain considers self-disclosure to be a rewarding experience nonetheless. So what is the takeaway? -Lance Brown. Addiction. Addiction is the continued repetition of a behavior despite adverse consequences,[1] or a neurological impairment leading to such behaviors.[2] Addictions can include, but are not limited to, drug abuse, exercise addiction, food addiction, computer addiction and gambling. 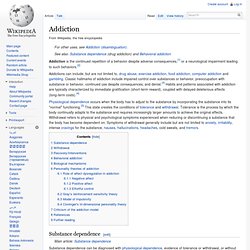 Classic hallmarks of addiction include impaired control over substances or behavior, preoccupation with substance or behavior, continued use despite consequences, and denial.[3] Habits and patterns associated with addiction are typically characterized by immediate gratification (short-term reward), coupled with delayed deleterious effects (long-term costs).[4] Substance dependence[edit] Substance dependence can be diagnosed with physiological dependence, evidence of tolerance or withdrawal, or without physiological dependence.

DSM-IV substance dependencies include: Withdrawal[edit] Withdrawal is the body's reaction to abstaining from an addictive substance of which it has become dependant and tolerant. Neuroscience of need - Understanding the addicted mind - 2012 SPRING. In this MRI of a brain (side view), the green, yellow and red areas indicate bundles of neurons involved in addiction. 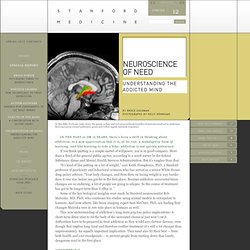 Red represents reward pathways; green and yellow signify habitual responses. In the past 10 or 15 years, there’s been a shift in thinking about addiction, to a new appreciation that it is, at its root, a maladaptive form of learning. And like learning to ride a bike, addiction is not quickly unlearned. If you think quitting is a simple matter of willpower, you’re in good company.

More than a third of the general public agrees, according to a 2008 survey by the federal Substance Abuse and Mental Health Services Administration. Understanding Addiction: How Addiction Hijacks the Brain. What Is Addiction? 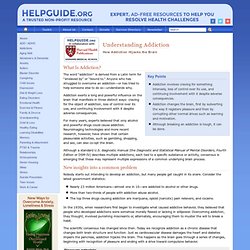 Key Points. Powder Trail: Tracing Vermont's Heroin Epidemic to Its Sources. Click to enlarge Matthew Thorsen Bulk heroin known as "fingers" of seized by Burlington police in an unidentified drug arrest Vermont police report that a staggering amount of heroin is flowing into the state right now. But where are the drugs coming from? Vermont_graph.gif (628×251) The New Face of Heroin: The Epidemic That's Ripping Vermont Apart. A Call to Arms on a Vermont Heroin Epidemic. Charts: Vermont's "Full-Blown Heroin Crisis." Photo by Andrew Burton/Getty Images This post originally appeared in Business Insider. Vermont has a growing drug problem. It's gotten so bad that on Wednesday, Gov. Peter Shumlin spent his entire 34-minute State of the State address talking about Vermont's "full-blown heroin crisis.

" The state has the highest rate of illicit drug use in the country, with 15 percent of people surveyed saying they've used within the past month, according to 2010-2011 surveys from the Substance Abuse and Mental Health Services Administration. Vermont Department of Health The trend seems to be hitting the 25-34 age group especially hard: The epidemic in Vermont might be caused in part by the incentive big-city drug dealers have to do business in smaller towns. Heroin in New England, More Abundant and Deadly. Vermont faces opiate drug abuse crisis.

MONTPELIER, Vt. -- Twenty-seven-year-old Stephanie Montagne grew up in St. Albans, Vt., the picture of an all-American girl. But behind the smiles, from the age of 17, she hid a drug addiction. Montagne says that at first, she smoked marijuana. "I smoked crack and tried pills," she says. "Eventually, I went to Oxycontin to eventually heroin to IV drug use. "

Vermont, Drug Rehab and Alcohol Rehabilitation Treatment Centers and Programs. When it comes to drug and alcohol abuse and dependency, one of the smallest states in America has one of the biggest problems. Amid the pastoral splendor, heroin gains a deadly foothold in Vermont.